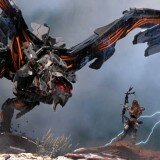 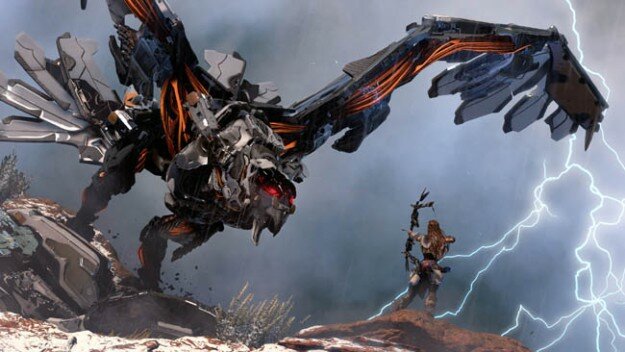 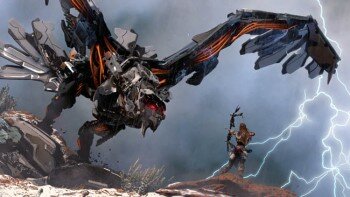 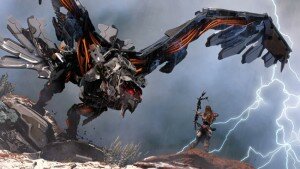 Horizon Zero Dawn is brought to us from the creators of the Killzone series, Guerrilla Games. Horizon Zero Dawn excited fans everywhere when they learned that it was an open world game with robot dinosaurs that you defeat with arrows. After nearly 50 hours with the game, I can safely say that the game is just as much fun as its premise suggests it will be.

Horizon Zero Dawn follows the story of the misspelled Aloy who lives in the distant future after an apocalyptic event. A girl who was cast out of her tribe at birth because whoever named her couldn’t spell. She was left in the hands of Rost, who was also cursed with a misspelled name. In all actuality, the player doesn’t know why Aloy is originally cast out of the tribe, and it makes for a great driving device to start the game as we learn more about Aloy as a child and it allows us to naturally connect with the character.

Once she becomes of age, Aloy decides to take part in her tribe’s Proving, where she can shed her title of outcast and join the tribe. However, that isn’t what she is really interested in. If she comes in first during the Proving, she can have whatever she wants, including answers about her mother.

During the Proving, things go very wrong. Aloy’s tribe, the Nora, is attacked by the Shadow Carja and things move from Aloy’s personal focus to a worldly one. Guerrilla Games have done a great job of weaving Aloy’s personal narrative to figure out the mystery of her birth with the greater story of her having to save the world. The plot captured my attention and never let it go until I reached the end. Horizon Zero Dawn, is worth it alone for the story, the fact that the gameplay is equally as good is having your cake and eating it too. 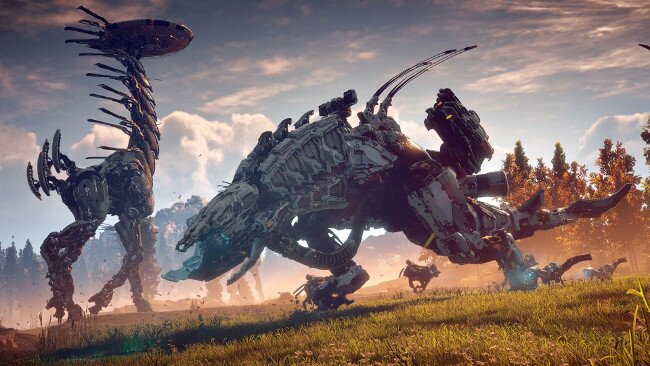 Horizon Zero Dawn’s gameplay is smooth and exciting. Aloy has several different weapons at her disposal from the long range Sharpshot bow to the medium and short range Hunter bow. She also has some more situational weapons such as the rope coaster, which allows you to tie down creatures so you don’t have to deal with multiple enemies. Or the Tripcaster, which allows you place different elemental traps. All the weapons have a use and strategically taking down some of the bigger creatures, such as the Thunderjaw, with all the different weapons is fun and satisfying.

I also like how the healing works. Aloy is a hunter and healing really makes her feel like one. You have to gather plants in the large open world that will fill your medicine pouch which you can use to heal. You can also use the meat you find create different potions, such as healing potions and potions that help you resist certain elements. Which you will use when the Glinthawks are firing ice bombs on your head like the flying pricks they are.

Along with weapons and potions, there is armor to collect. Horizon Zero Dawn has several different suits of armor Aloy can wear that all offer different strengths. You have some that are great for arrows or melee attacks or you can focus on ones that are strong against certain elements. Perfect for when flying pricks are dropping ice on your head. You can then modify the armor and weapons with different upgrades that improve their effectiveness. 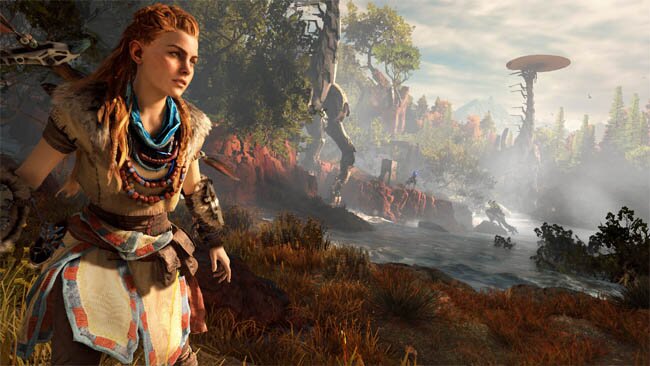 Horizon Zero Dawn also has some RPG elements to go with the arrow shooting action. You gain experience and level up which grants you skill points and an extra 10 points to your health bar. The skills are varied and fun. Being able to shoot three arrows at a time and slow down time made taking on some of the tougher enemies a much more manageable task. The three different skill trees have plenty to offer and most of them are very useful while some are more for fun, such as the skill to slow down time when jumping and sliding. Is it useful? No. Fun? Very much so.

The only thing I didn’t care too much for are the moral choices. They feel so token and I would have preferred if they just gave Aloy more of personality and let her respond as she would. Still, it is a minor complaint that is easily overlooked by how great the rest of the game is.

Horizon Zero Dawn is an absolutely beautiful game. The world is bright with varied locals that are a joy to explore and the enemy design is just as good. The big robot dinosaurs feel big and it is gratifying to shoot chunks of their armor and see it go flying. It is definitely someone of the prettiest game on the PlayStation 4. The animations are smooth and the characters actually look like people and they did a great job of making Aloy’s face convey the emotions she is feeling. It is all truly incredible to look at and makes exploring the large world even better. 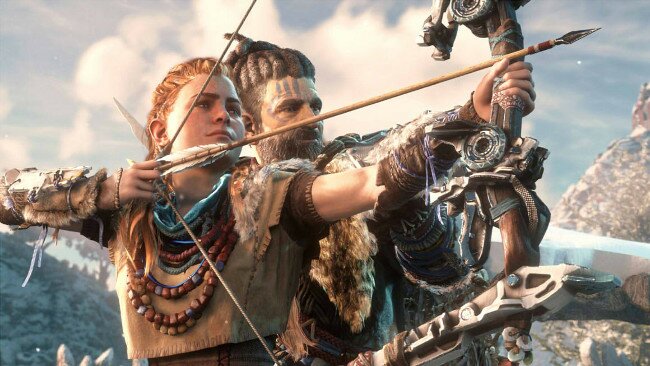 Thankfully, the soundtrack is on par with the graphics. The music kept me engaged and never took me out of the world. The voice acting is a little worse, but it is far from terrible. The main characters such as Aloy are great, but some of the quest givers fell sound a bit robotic in their performances.

Horizon Zero Dawn is a fantastic game and is a very early game of the year contender. The story and gameplay are fantastic and combine together to make for an engaging experience. It has some minor issues, such as the moral choices, but they are overlooked by how great and polished everything else is. It is easily one of the best looking games on the PlayStation 4 which is just oil for the pretty robot dinosaurs

This copy of Horizon Zero Dawn was purchased by the reviewer.