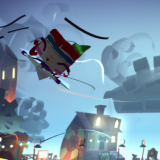 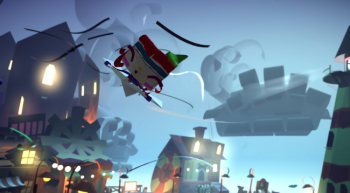 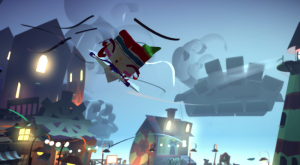 Tearaway Unfolded is a remastering of the original Tearaway game, and adventure-based platformer developed for the PS Vita by Media Molecule. Originally announced at Gamescom 2014, the game was released to eager fans on September 8, 2015.

Similar to the original Tearaway the play controls either the male of female messenger tasked to deliver a unique message to the player, referred to in-game as “the You.” Along the way players must assist their messenger by altering environments in passable areas, and fighting off “scraps” that wish to prevent the message from being delivered.

Now, one important thing to note is that there is no fourth wall in Tearaway Unfolded. The player does not take control of their messenger but simply guides them, and the messenger is aware that they are being guided. Additionally the non-playable characters in the game are aware of “the You” and understand that the messenger is not working alone. Frequently characters will ask “the You” for their help in tasks, such as collecting photographs or redesigning their character skin. There are also two narrators, one male and one female, who help the messenger and their “You” build a trusting relationship. Though these narrators exist within the story and introduce different gameplay elements, they also exist in a world outside the story where they exercise control of the events that befall both messenger and their “You.”

It sounds a bit strange, right? A game that is fully aware it is a game, and characters who understand that they are under the influence of a “You” behind the controller. There are even characters within the game who have dedicated themselves to studying the science behind controllers and their various buttons, and villains who seek controllers for themselves. Yet all of this works fairly well together, and I really enjoyed having control over a world that had an idea of who I was. One of the options in the game is to upload a picture of yourself, and from there the game will insert it into different areas. The main place you will see your photograph is in the hole in the sky where you are leading your messenger, but your face will appear other places as well and you will find characters staring at it. It is almost as though you are worshipped as a god in this paper world, which I will admit is strangely empowering. But how far can a self-aware game actually go?

The main critique I saw about Tearaway Unfolded prior to its release was that the story and pacing needed a lot of work. Whereas the original Tearaway focused only on the Messenger reaching “the You,” this game faced the issue of needing to be longer. So what we end up with is the Messenger about to reach you at the end of the first chapter, and suddenly the narrators decide that the story needs a bit more. With the ending ripped away from you, the Messenger is plunged into two more chapters that have very little to do with actually getting delivering their message. The second chapter focuses on your Messenger finding a friend captured by the scraps, and also learning about the science behind buttons on the controller. From there the story seems more or less wrapped up, aside from the message delivery, so the Narrators move it into a “between the pages” section. At that point the game gets a bit surreal, though it does have the larger focus of your Messenger reaching you.

Despite the second and third chapters being quite fun, they could be a bit tedious at times because of the story. Every once in awhile I sat there and asked myself, “Why exactly am I doing this again?” There was no clear end to the scripted scrap battles and platforming across seemingly never ending landscapes, which makes it difficult to gauge how much progress you were actually making. And not being able to place yourself at a certain point in the story can really cause a game to suffer. Luckily Tearaway Unfolded has the visuals and creative element to keep it moving. Who cares about a shaky story when you get to explore the Alice in Wonderland-esque inside of your DualShock 4 controller? 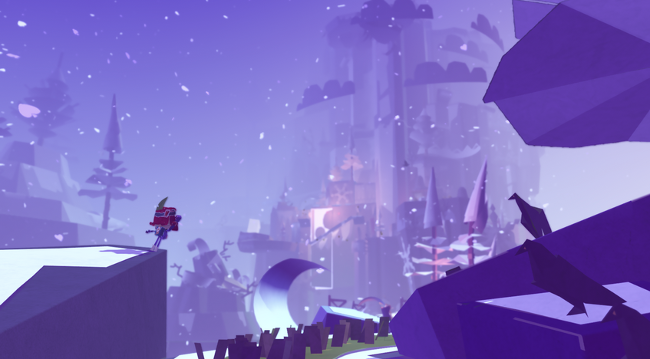 This game has one of the best uses of the DualShock 4 controller I have ever seen. It seeks not to use simply one of the unique features the controller provides, but all of them. The light on the front of the controller can be used as a literal light in the game, guiding your messenger and clearing away the horrid newsprint scraps have left behind. You can also use the light in combat; either hypnotizing scraps to walk into dangerous traps or making some scraps aggressive against others. The touchpad is used is used for two main functions, which are environment customization and creating wind. For customization, which is one of my favorite parts of the game, you use your finger to draw on the touchpad. Of course the touchpad is not the best surface for drawing on, and I usually ended up with some monstrosity that only looked slightly what I was going for. Still, there is something magical about seeing a snowflake I drew, no matter how poorly, be multiplied a thousand times in the sky. Motion controls are also utilized later in the game, which allows you to alter platforms to your needs. Some of these sections were surprisingly difficult, but it was still fun to see the world tilt along with your controller.

One of the best parts of the gameplay in my opinion is how the tools were spread out. Even if you had learned all the tools your controller had to offer, each chapter showed you a new way to look at them. In one chapter you may use your created wind to scare away crows, but in another you can use it to push back stormy seas and even fly. My hands were always moving about on the controller, which is something I really enjoy. Who wants to binge-play video games only to have half their hands fall asleep from staying still too long?

This game proudly boasts rendering in 1080p HD and 60fps, which I must say is breathtakingly beautiful. Though a world being made entirely out of paper seems fairly simple, it is anything but. Suspended confetti makes up the starry night sky, and gusts of winds are swirls of colorful paper flying across the screen. I found myself taking in-game pictures of almost every landscape I came across because I wanted to capture the beauty of it all. Words truly do fail me when describing the paper craft environment because of its creative realism.

I have not played a game meant for all-ages in quite a long time, so I was not entirely sure what to think going into this game. But I can truly say I am happy I picked up Tearaway Unfolded. Its creativity and emphasis on the player’s role in the story was something I thoroughly enjoyed, and I can say I have never had another gaming experience like it.