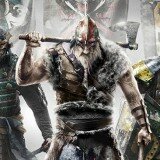 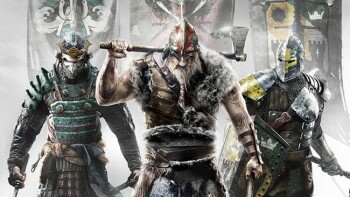 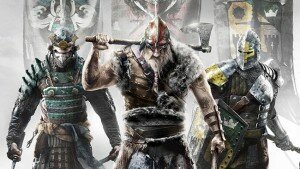 For Honor is a medieval fighter, kind-of-sort-of, that is fast paced and has the important easy to learn, hard to master controls. The game is set to sprint out of the starting gates only to stumble at the first few hurdles to greatness.

For Honor does have a single player mode. However, to participate in that single player mode you must have an online connection. Participate is the key word here because there is very little amount of fun to have in the story campaign as the game drags you from plot point to plot point. The story takes place through three chapters each one centered on one of the three factions, Knights, Vikings, and Samurai. You start out with the Knights factions where you meet the antagonist, Apollyon.

Apollyon is a very boring villain. She wants to bring war to the three nations because she feels like it. Each story mission has you taking on a different character that represents one of the nine classes. All of these characters are boring as a plank of wood and their voice actors successfully represent this in their horribly written lines. They all sound so similar I’m not entirely certain they didn’t just share voice actors.

The best thing to say about the story is that it is short. You can beat all three chapters in just an afternoon. Of course, that is if you can tolerate the repetitive quips the bosses keep spitting out as if they are trying to kill you with words. If that is the case, then it is a very effective strategy. 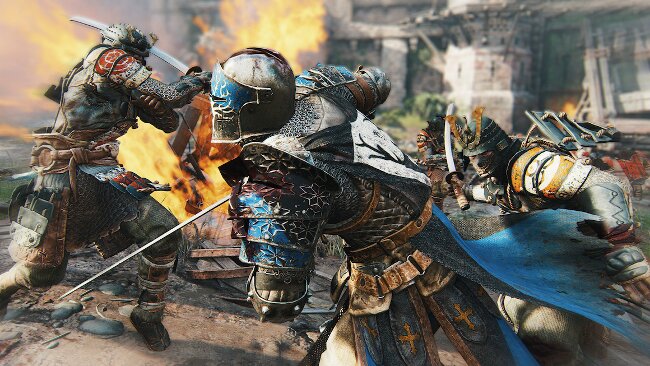 I like For Honor. The combat is nuanced and having to move the right stick in times with player attacks to block and choose which direction you want to attack is addicting. However, it has some issues. Okay, it has a lot of issues. The servers seem to be a fickle beast and moving around the more open environments feels very forced. It is hardly a fluid experience, but it is a fun one.

The story campaign isn’t just bad in story, it is also bad in the gameplay department. For Honor is very much designed to be a one-on-one fighter. This makes moving around the boring, if beautiful, environments a pain. Your character moves slowly and the movement is all very bulky. The controls work well when it is one-on-one fighting but the campaign has very little of that. It is usually mowing down weaker enemies until you can get to a boss and the campaign resembles something considered fun.

I’ve harped on the single player quite a bit, but thankfully, the variety of multiplayer modes hold up much better. Players can choose between Duel, Brawl, Dominion, Elimination, and Skirmish. The only one of these modes I really dislike is Skirmish.

Duel is probably my favorite mode. Duel is where For Honor’s strengths shine through. The nine different classes are all fun and different enough from each other to not feel like clones. When it is just you and an opponent battling it out in a true test of skill, the game is exciting and a wonderful experience. Unfortunately, there are a few issues, mainly with the maps. Whenever the maps focus too much on the environmental kills, a fun duel becomes an annoying test of who can knock who off the edge first. This is most apparent on the map that is nothing but a narrow bridge that becomes who can guard-break who first and throw them off the bridge. It may be called For Honor, but that is one of the most dishonorable ways to kill an opponent and never fails to feel cheap compared to a true test of skill. Brawl is similar to Duel except it is 2-v-2. The mode is fun if you want to Duel and play with a friend at the same time in some jolly cooperation. It is still fun but doesn’t do much different from Duel. 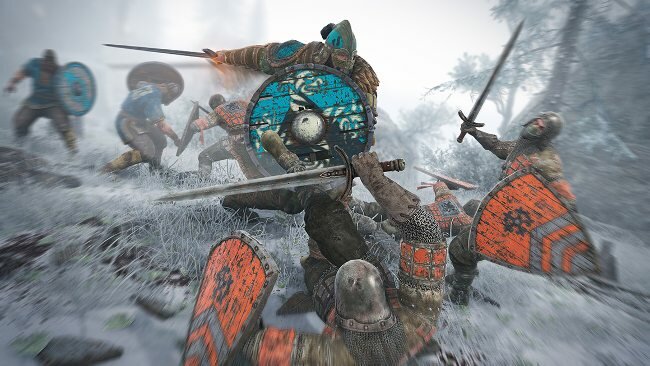 Dominion, on the other hand, is a completely different beast. Dominion pits two teams of four against each other as they battle over different points to capture. This and Skirmish both have the soldiers, AI controlled enemies that die in a single hit, and I don’t understand the reasoning.I find them annoying and they get in the way of the fun fights between the different player controlled enemies. It’s like battling an opponent as ants crawl all up your legs. It’s not enough to stop the fight, but it sure is annoying.

Thankfully, there is Elimination. Elimination is just a team-death match that starts out by putting players in a position for a duel. While you can be a jerk and ignore the person in front of you to try and get a get a cheap double team, the game at least discourages this by starting out in a good position for a one-on-one fight.

And then there’s Skirmish. I absolutely hate Skirmish. It is an odd mixture of Dominion and Elimination as it is the team-death match of Elimination with the annoying soldiers of Dominion. It mostly just becomes teaming up on people and takes away all the fun and tension of the one-on-one fights. Still, that is four fun game modes compared to just the one bad.

Another issue with For Honor is one that simply should not exist. The menus look as if they were designed by someone who heard of menus, but never actually saw them in action. They are clunky and involve a lot of digging to get where you want. Even more annoying is the matchmaking. It is almost broken as of now. In everything that isn’t Duel and Brawl, players can use equipment they either bought with Steel or earned through battle. This equipment helps players customize their favorite class by giving them some stats that make them better in certain aspects. The higher level the gear, the better the stats it gives. So why does the game seemingly completely ignore this aspect when matchmaking? This causes a lot of one sided beat downs and that is hardly any fun, especially when you are the one getting beat down. 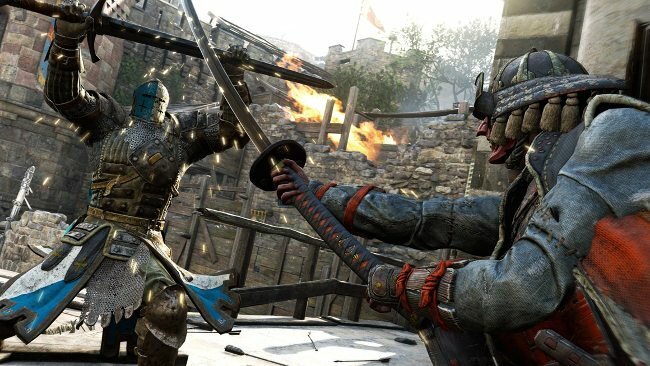 I’m also very confused as to why For Honor separates Duel and Brawl, letting players choose which one they want to queue up for, but not Elimination and Skirmish. I like Elimination, I want to play Elimination, I don’t want to play Skirmish. All you can do is set the preference for Elimination but this seems to do absolutely nothing. I still got thrown into a Skirmish match about 50% of the time. Not letting players choose which mode they want is a horrible design choice. It’s like ordering a meal at a restaurant and only having a 50% chance of getting something even similar to what you ordered.

There is also the meta-game Faction Wars. This is an unnecessary addition as it is based on which faction you choose and the only impact you have is by playing multiplayer. It is easily ignored and adds nothing to the game, especially since there are three of them. Two of them will be pretty close and one will just fall by the wayside.

For Honor looks great. The environments are packed with detail, though they can be samey, and the character models are well detailed. The customization options all look good and it is easy to separate your character from the others.

The sound design is just okay. The music is very forgettable and hearing grunts isn’t exactly an immersive experience. Piled on top of the truly awful voice acting leaves the sound design lacking. 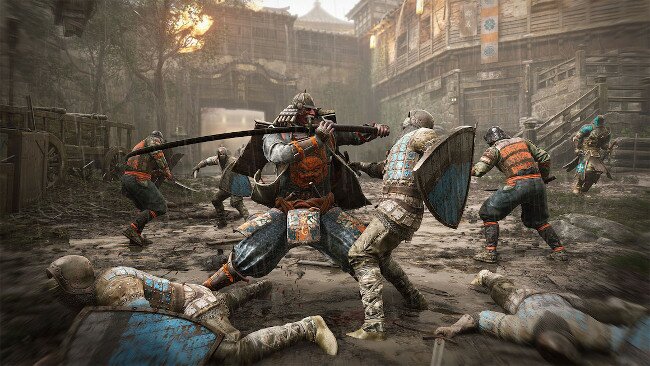 For Honor has a lot of issues. The game really wants you to fight multiple people despite the fact trying to switch lock-on targets is an effort in futility. It has an odd and inconsistent design filled with bad menus. The story is nonsense and the voice acting is equally as bad. However, it is fun. The combat is solid and when it is a one-on-one fight, it a tense measure of skill with your favorite character, which all play differently and are, for the most part, well balanced. So while it may have frustrated me to the point where tearing my hair out seems like a reasonable thing to do, I did have a lot of fun with the game and that is truly what is most important in a game.

This game was purchased by the reviewer.