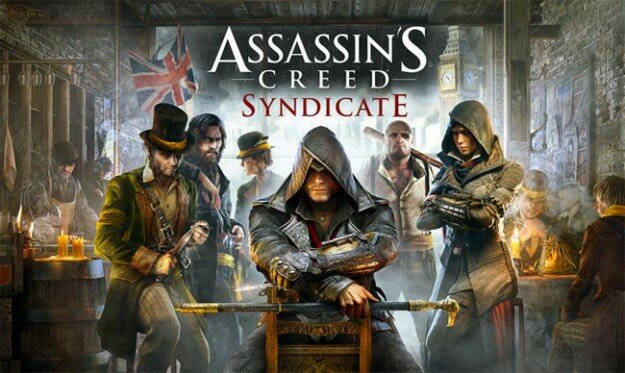 Ever since 2009, there has been a new Assassin’s Creed game every Fall. The series has become that ever-present force, a series that found a formula and stuck to it as the Assassin Brotherhood tromped through different time periods. After 2014 brought the technical disaster that was Assassin’s Creed Unity, fans were anxious about the next game in the series. Would Syndicate suffer from the same faults? I am happy to report that, surprisingly, it did not.

In 1868 London the Industrial Revolution is slowing down, and the Assassin Brotherhood is all but eradicated from the streets. Twins Jacob and Evie Frye arrive to find the Monarchy and Church losing influence while the Templar Order holds power over the streets, economy, and medical system. The twins work to take back control of London, with Jacob raising a formidable gang and Evie desperately searching for a Piece of Eden.

The story is fairly standard for an Assassin’s Creed game, where someone goes into the Animus to find a Piece of Eden in the past so it can be reclaimed in the present. As an Assassin initiate, sitting safely at an undisclosed location, the player will get updates on the Brotherhood’s movements in the present. These cutscenes are few, so it is easy to forget that you are running amok in London because your generic good-guy friends are hopelessly behind the generic bad-guy Templars.

One of the main appeals of Syndicate is the inclusion of a female Assassin. There have been playable female assassins in previous games, but this is the first time one has appeared in a major Assassin’s Creed release. Ubisoft also takes to adding more non-playable female characters in this game, possibly as a response to the 2014 controversy. As you play you will notice that half of all basic enemies you meet are women, and how women have a significant presence within your gang.

Given that there are two playable characters that contribute to the overall plot, there are designated story missions for Jacob and Evie. These story missions play into the twins’ personalities, where the calculating Evie goes after the Piece of Eden while a brash Jacob runs amok with local gang leaders. As the game progresses the player earns experience points that can be spent in a skill tree. However there are some melee skills reserved specifically for Jacob, and some stealth skills only Evie can use. This is the game’s solution to maintaining distinct personalities and combat styles for the two playable characters outside of cutscenes. It is a fragile solution, however, because it can be easily undermined by the sandbox gameplay.

The sandbox allows the player to roam London as either Jacob or Evie, completing different associate activities to free the city from Templar control. After completing all the activities in a given borough, there is a gang war that determines whether the Assassins or Templars will be in control. It becomes clear to the player that the gang activities are geared more towards Jacob, because he was the one who wanted to focus on the power of Templar-run gangs in London. However. I took full advantage of the option to play as Evie. This left me with two similar, but still significantly different versions of the female assassin. For the story missions I had the calm, collected assassin who believed that the piece of Eden would hold the key to the Assassin’s success. Her stealthy ways led to stability in London and the Assassin Brotherhood. Then I had the sandbox Evie, who roamed the fight clubs and brutally took down every gang leader that stood in her way. Any problem was swiftly solved with a knife to the throat of any enemy.

Of course this is mainly a reflection of my play style, so it is my own fault that the intended image for Evie was shattered. Yet I feel as though there should have been something that smooth out Evie’s integration into the sandbox. Even a cutscene where she begrudgingly admits to Jacob that the gang’s influence is beneficial would have sufficed.

I did come across problems during gameplay where the game would freeze while it tried to load in environmental textures. This only happened to me when I was speeding through London in a carriage where I was moving too fast for the game to keep up with the intensely detailed buildings lining the streets. A solution to this was going watching my speed while driving, but “slow” is not really an option when chasing down a target.

I truly did enjoy Assassin’s Creed Syndicate, but that is mainly because there were a lot of selling points piled onto the standard formula. Being able to play as Evie was a huge contributing factor, followed by Victorian London, and then finally the ability to hunt down Jack the Ripper in a DLC. The gameplay and story were average, and I never found myself genuinely surprised by the twists in the game. There was a glaring highlight which caught me off guard that I really, really enjoyed, but for the sake of spoilers I cannot discuss it.

Overall, Syndicate is little more than another Assassin’s Creed game. Of course the formula is something that works, and if you are a fan of the series you will not be disappointed with this latest installment. And with the amount of collectibles and community events happening in Syndicate, we can keep playing the Victorian adventure while waiting for the next Assassin’s Creed, which was delayed until 2017.