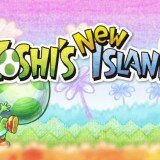 Nintendo’s adorable green dinosaur, Yoshi, has always been a fan favorite. Strap on a baby Mario to his back and you are given a world of cuteness. Similarly to the original Yoshi’s Island game, Yoshi’s New Island does just that. Giving us unique, color-pencil style 3DS graphics, evoking an overall childlike feel, Yoshi’s New Island strives off of its invitingly happy and colorful vibe while lacking the challenging puzzle solving mechanics that we would generally expect from a Mario franchise game.

Yoshi’s New Island begins with a cutscene which shows baby Mario and Luigi being delivered to their home by a stork. Unfortunately, the negligent stork delivers the babies to the wrong home, thus making them have to travel to find their rightful place. On the way, they come across Kamek, who attempts to steal the babies and bring them to Baby Bowser. While Mario was able to get away, Luigi was captured. Mario ends up being found by a group of Yoshi, who come together to help Mario find his twin brother and return them to their proper home. With Baby Mario on their back, the various Yoshi platform their way to Baby Bowser’s castle in hopes of defeating him and reuniting the two diaper-wearing brothers.

Gameplay is generally the main appealing quality to any Mario franchise game. Containing various puzzles that are both difficult and enticing, this is what we would expect from Yoshi’s New Island as well. However, there is virtually no puzzle solving as nearly every obstacle is both predictable and easily laid out for you. The boss battles use a 3-hit-and-done mechanic, which is to be expected, but requires very little effort and lacks any sort of challenge that a long-time Mario fan would hope for. Yoshi’s New Island seems to cater to a younger audience who aren’t as familiar with Mario games as adult gamers are, and while that is understandable, it makes it hard to recommend Yoshi’s New Island to anyone looking for a new 3DS game.

While Yoshi’s New Island harnesses almost the exact same elements of the original Yoshi’s Island, there is the added ability of gulping down giant Shy Guys and laying a gigantic egg that has a special ability. These eggs can be used to demolish walls blocking your path or to allow you to sink underwater. There are also levels in which Yoshi can transform into various vehicles, such as a jackhammer, sled, helicopter, submarine, and more. Using the 3DS’ motion controls, you use this transmogrified Yoshi to get you through the level, which is timed, and collect as many coins as possible. The motion controls work surprisingly well and add a bit of differentiality to the platforming gameplay; however, the helicopter and submarine Yoshi morphs feel clunky and slow and are more frustrating than fun.

There are an ample amount of collectibles in Yoshi’s New Island, such as flowers, stars, and coins that give it a bit more replayability. These collectibles are often hidden, but aren’t very difficult to find. Some collectibles will be hidden in a cloud with a green question mark painted on it, which you will have to fling one of your eggs at to make it rain out your items.

Yoshi’s New Island has a completely different health system than other Mario games. If you are to be hit by an enemy, Baby Mario lets out a glass-shattering screech and is removed from Yoshi’s back, floating in a bubble until he is retrieved. The sound he makes alone will make you desperate to retrieve Baby Mario, but if you aren’t able to get to him in time, or if an enemy captures him first, then you “die” and have to restart the level or resume from your previous checkpoint. This system can be frustrating, as while at times it is easy to retrieve Baby Mario, sometimes you are stuck in an area that renders him completely irretrievable and you are forced to start over. Yet, as long as you are playing safely, you shouldn’t have much of an issue with this, which once again adds to the simplicity of Yoshi’s New Island, as the only ways Yoshi can die are from losing Mario and from falling off the edge of a cliff. Getting hit by an enemy doesn’t mean automatic death, and for the most part you will find yourself leveling through Yoshi’s New Island with a bit too much ease than you would like.

If you are wanting to play with a friend, Yoshi’s New Island also has a co-op mode in which you and a friend can compete in various minigames. These minigames can be unlocked through your adventures in the single-player campaign, but the excitement of playing these challenges just isn’t there and is something that will only please the younger generation of gamers who are looking to get in on the Yoshi action with a friend without caring about simplistic design or lackluster gameplay.

The graphics in Yoshi’s New Island are what keeps you distracted from the middling gameplay– for a short time, at least. The game harnesses graphics that appear to be drawn with colored pencil and seem straight out of a children’s book. Throughout the world of Yoshi’s New Island there are a wealth of pretty flowers and bright landscapes that make the game give off an overwhelmingly happy, calm vibe, that is quite pleasant to experience. Yoshi’s New Island looks even better with the 3D capability turned on, which as someone who infamously keeps their 3DS on 2D mode, saying that is quite a feat.

There is one noticeable hindrance when it comes to graphics though, and that is Yoshi’s character model. Throughout the game my attention kept being brought to Yoshi’s character model specifically, as there was often a flickering around his model. As you play as Yoshi, it seems strange that this problem would not be fixed, as it is the character that you are constantly seeing. Yet, this wasn’t a problem with any of the other characters.

Probably the prettiest moments in Yoshi’s New Island come from Bowser’s sidekick, Kamek, as he flings out magical shapes that are rainbow-toned, bright, and beautiful. His scenes, which are generally during boss battle moments, rid of the pastel style graphics and give a more dazzling tone, providing us with a bit of a break from the pre-school room vibe that is prominent throughout Yoshi’s New Island.

While the screech emitted by Baby Mario as he is knocked off of the back of Yoshi is quite painful to listen to, the music in Yoshi’s New Island is generally calm and serene, often filled with the adorable tunes of Yoshi. Yoshi’s New Island has one main song that plays in the background over and over again, but the song is given a new tone throughout each of the six worlds, making it slightly different each time and it doesn’t ever seem to get annoying.

Every little sound effect in Yoshi’s New Island will make you nostalgic, giving you moments of happiness. Whether its the sound Yoshi makes while popping out an egg, or collecting stars, or even the slightly straining noise that Yoshi makes while fluttering, the sound effects add to the appealing tone that the graphics in Yoshi’s New Island provide, giving us those Mario and Nintendo game moments that we love.

Yoshi’s New Island is a master of deception. It is so easy to become wrapped up in the overall cuteness that Yoshi, Baby Mario and Luigi, the pastel graphics, and sound effects provide, but as you continue playing through Yoshi’s New Island, the glow begins to fade as you realize that the gameplay just isn’t there. With mechanics that are far too simple, predictable, and with very little additions to differentiate it from the original Yoshi’s Island, Yoshi’s New Island isn’t an experience that is all too memorable.