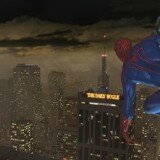 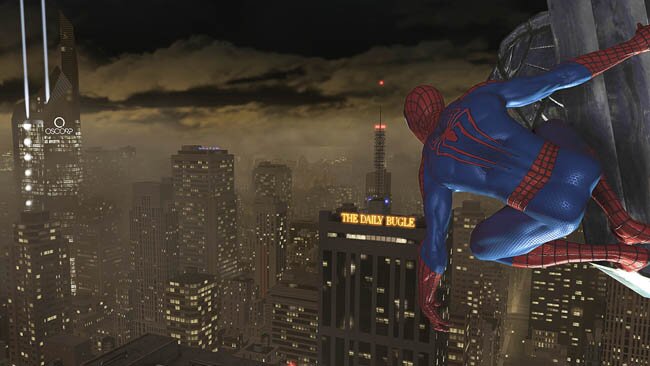 Playing Amazing Spider-Man 2 is a lot like playing catch with a chimp. Objectively, it shouldn’t be any fun. Despite its best attempts, the chimp can’t throw very far, buzzes about angrily when anything goes wrong, and takes absolutely ages to even pick up the ball.  But damn, if it isn’t fun to watch it try.

AS2’s biggest flaw, however, is that there is so much potential in its design. Instead of the next-generation Spider-Man game, what the community gets is a discount blend of Spider-Man 3 (yeah, not even the good one) and Batman: Arkham City.

AS2’s tutorial forces the player to experience possibly the worst rendition of Uncle Ben’s famous death ever conceived. The player is taught how to walk across the road as Peter Parker until they hear a tinny gunshot. Then the player is taught how to run up the street as Peter Parker to his dying uncle for a fifteen second cutscene where Sam Riegel’s voice-acting crackles and breaks over the speakers.

AS2 appears to exist in an alternative universe to its movie counterpart. Where its predecessor claimed to be a continuation of Marc Webb’s story after the events of the Amazing Spider-Man movie, the tie-ins come just in the form of the origin stories of Electro and the Green Goblin. The plot picks up 2 years after Uncle Ben’s murder and Peter is still grieving over the death of his uncle – despite using the first game’s events as a vehicle to overcome his grief. Hunting a sadistic murderer known only as the Carnage Killer, he teams up with Craven the Hunter to learn how to be a true hunter. The story is daft and camp, but like much of the new universe, it’s a modern take on an arc from the comics so it’s forgivable, even if Gwen Stacey’s mysterious absence isn’t.

Whilst Craven is rather poorly executed as a character, the fantastic Kingpin takes center-stage as the arching villain and drinks up every second of his limited screen-time. The story’s greatest flaw – aside from a ludicrous tie-in with Stan Lee playing himself as a shop-owner who was Uncle Ben’s best mate – is that any time the Kingpin wasn’t on-screen was wasted with ramming Spider-Man’s must-not-kill policy down the gamer’s throat. Every boss fight ends with Spidey purposefully refusing to kill the latest addition from the rogue’s gallery.

This is the smallest New York Spider-Man has ever swung around. The Statue of Liberty is nowhere to be seen. Ravencroft prison, Peter’s home and the Kingpin’s hideout are all painfully slow loading screens away. This poor level design, among other things, makes it feel like Beenox ran out of time, like they shipped out a game completely removed from the one they set out to create.

The combat relies on button mashing and a counter-system ripped off of the popular Batman games. It took a full ten minutes to figure out why it didn’t feel half as satisfying – the repetitive animations and dialogue got boring after the first fight with limited character models and a heavy reliance on mashing the square button until quick-time events appeared. At first it appeared the lame combat was purposeful – a means to introduce the new skill-tree and upgrade system – but the upgrades are minimal and barely improve the gameplay.

Stealth is an option too, however the enemy AI are as intelligent as the Rhino so Spider-Man can stand fifteen feet in front of them and they still won’t notice him. Regardless, stealth comes with stylistic take-downs which are both entertaining and light-hearted, keeping in with the character. It’s uplifting to see this light-hearted tone bleed through the gameplay, as it would have been all too easy to go full Batman with a dark and gritty Spiderman – and every good developer knows you should never go full Batman.

The web-swinging feels more realistic now, but as a punishment for the realism it lacks the style from older games. There’s no build-up of momentum to increase speed, and the close, frantic camera angles made it difficult to control Spidey when he glitches into the sides of buildings. More than once web-swinging squeezed Spiderman into chimneys and windows, forcing me to restart from the last checkpoint. 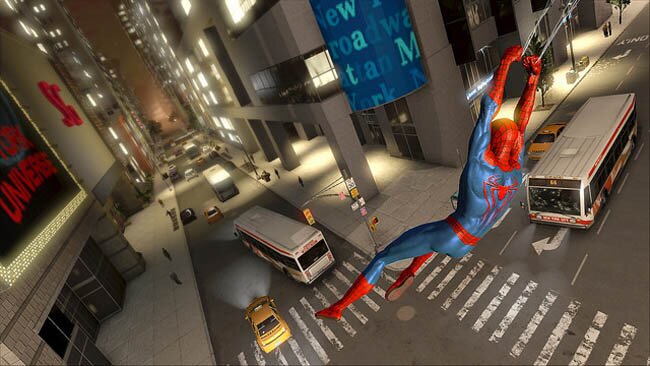 The city doesn’t feel alive either – even though it’s packed with things to do, from collecting comic-book pages to taking photos of suspicious activities to fighting thugs and the Kingpin’s task-force. However whilst it’s fun to snap photos of famous landmarks from the comic-book universe, and hunting Cletus Kassady through his crime-scenes are actually quite fascinating, the side-missions are lumbering and awkward. Crimes flash up on the mini-map for Spider-Man to attend to, varying from fires to bomb disposal to car-chases, however they all play out from the same template, and if Spidey can’t reach the side-mission in time he is branded a menace – the game literally punishes the gamer for choosing to play its story over its side-missions.

The most ludicrous addition is the “morality system.” The entire mechanic should have been scrapped, as it just feels like a perception meter, and even then it’s a poorly implemented one. Its very existence goes against the character of Spider-Man. Spider-Man would never do anything remotely immoral, a point the story labours by constantly pointing out that he won’t kill anyone. Furthermore, the Daily Bugle breaks character completely by constantly complimenting the web-slinger’s actions after a successful side-mission, rather than twisting the story to frame Spider-Man as the vigilante it always does. Whilst this feature is present when Spidey overlooks ongoing crimes in the city, it feels shallow, and the same news reports are recycled over and over.

The game’s graphics would be ugly even by last-generation’s standards, but on a current generation console the characters look plastic and clunky, the lip-synching is completely off, and the textures pop in and out of the frame. Whilst some sections – like the battle with Electro – are visually interesting, the city itself looks bland and lifeless.

Every character model from the movies looks slightly like their cinematic counterparts, but with too large a nose here or the wrong shade of hair there. It’s clear that Beenox just couldn’t get the likeness rights for their video game, so had to alter some of the character designs. Electro and Harry Osborn were big stand-outs as far as this was concerned – often breaching the uncanny valley with their level design. With regards to Spiderman, his character model is laughably energetic in the cutscenes. It’s understandable that Beenox would have made his animations more deliberate due to the mask hiding his emotions, but Spiderman’s dialogue is often joined by graceless interpretive dance.

Even Spider-Man’s spider-sense, which had so much potential to make its own mark, looks like a second-rate detective mode from the Arkham games. The character models should have been outlined with bold colours and outlines reminiscent of the comics. There should have been a clear red, white and blue colour-scheme to outline the cartoonish nature of Spider-Man’s costume and personality, but instead a dull navy tint is used, often hiding enemies entirely rather than revealing them.

The voice-acting is just okay. Apart from JB Blanc’s stellar performance as Wilson Fisk, the accents and intonations are just bland. Even the ludicrous Russian accents aren’t serious enough to keep the immersion, nor cartoonish enough to be funny. Sam Riegel voices Parker once again, but rather than channelling his inner-nerd or superhero, we just get Sam Riegel reciting lines of dialogue. If I had to hear Parker obnoxiously tell me “newsflash! Webs need something to stick to!” while I swung right past a building one more time, I was going to throw my controller through the TV.

The music is well-handled, even if it’s recycled from the first Amazing Spider-Man game. The strings play during Spidey’s exploration of New York, bringing a sense of grace and wonder to the webs-swinging. Though the question has to be asked: where was Han Zimmer’s glorious soundtrack from the Amazing Spider-Man 2 movie? During free-roam I found myself muting the game’s score and playing the movie’s through Spotify instead. There was a missed opportunity for the use of Spider-Man’s headset as well. If he can tune into the radio to listen out for crimes, what’s stopping him from tuning into the mainstream radios as well? Activision should have invested extra funds into licencing songs for Spidey to listen to while he swung around the city – that would have extended its fun meter and replayability extensively. 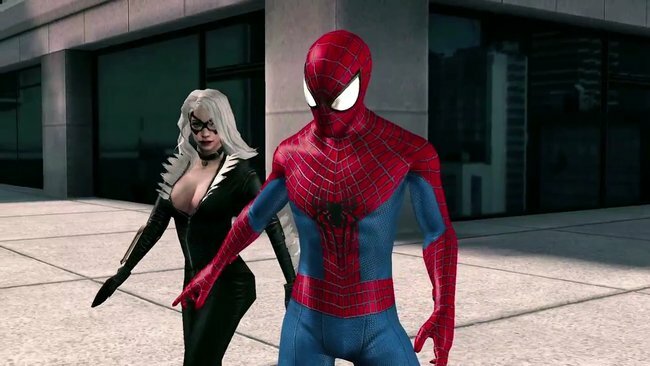 Despite its flaws, you can’t help but enjoy the Amazing Spider-Man 2 – because it’s another Spider-Man game. Regardless of how glitchy, messy or objectively bad the mechanics are, most gamers want to be Spider-Man. It’s just a shame that the gameplay doesn’t make you feel like Spider-Man. It’s more of a frustration to see such potential go to waste once again.

Pick this up if it’s for a tenner in a sale – but don’t run out and buy it today.