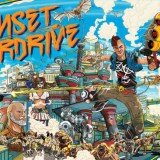 Sunset Overdrive is the game that Microsoft promoted to be the frontrunner exclusive game for their newest console, the Xbox One. The game certainly had quite a large budget, as we were constantly seeing TV advertisements of the game, which procured quite an ample amount of hype. While the anticipation was abundant as a result, there were skepticisms on how this game would turn out. Some games are over-hyped, and leave fans sorely disappointed because of this; however, Sunset Overdrive more than lives up to everything Microsoft and Insomniac claimed it to be. Sunset Overdrive is a humorous romp of a good time filled with fluid, action-packed combat that will make you praise every moment.

Sunset Overdrive throws you straight into the action, as your character is doing the unappealing task of working as clean-up crew at a concert. Promoted by energy drink corporation, Fizzco, the company shows off their newest energy drink. However, the energy drink turns its drinkers into neon orange mutants set on destruction. While Fizzco has turned the majority of Sunset City into mutants, it is up to you and fellow survivors to put an end to Fizzco, who is trying tirelessly to cover up their tracks and make it seem as though they were not the cause of Sunset City’s destruction.

In your journey through Sunset Overdrive, you will meet survivors of various types: from LARPers to vigilante cheerleaders, you will love every character you come across. Everyone is filled with personality, making the story something that you won’t want to end. In a world where developers seems to be focusing more on gameplay than giving players a fulfilling story and interesting characters, it is nice to see that Insomniac really put effort into making a storyline that is enjoyable on its own.

Sunset Overdrive’s main campaign isn’t very long. It will take about 12 hours to complete, however there are many more hours of side missions to keep you entertained. Every mission you complete in the main storyline is filled with excitement and action, with not a single mission being lackluster.

What makes Sunset Overdrive unique is its combat. In Sunset, the enemy mutants are extremely powerful; however there is one sure-fire way to combat them, and that is with superb traversal and rail-grinding skills. By grinding on rails, bouncing of cars, and overall killing with style, your Style Meter will increase, allowing you to kill enemies with power. Oppositely, if you attempt to kill with your feet planted on the ground, you have no advantage whatsoever, and chances are you will be violently demolished in seconds. This unique style of combat maintains the action-packed vibe of Sunset Overdrive, making sure that you are constantly on the move and ensuring that there is never a dull moment. To accompany you on your stylish playthrough is a wide arsenal of unique and intriguing weaponry. There are fire-ridden shotguns, deployable teddy bear grenade guns, and my personal favorite, the Acid Sprinkler, which deploys Fizzco mascots that shoot out acid and deal a crazy amount of damage to all that pass. Every weapon is upgradable, and you can earn bonus perks such as increased weapon damage and heightened ammo capacity, making sure that your favorite gun is always accessible.

Aside from the main campaign, Sunset Overdrive features an 8-player co-op mode called Chaos Squad, which surely lives up to its name in the best way possible. Chaos Squad allows you to play through specific multiplayer missions in an attempt to compete a set-out goal. The final mission in Chaos Squad will always be a horde mode, which is the most fun, action-packed sequence you will find in the entire game. Facing the horde in a group of eight is filled with absolute chaos, as you will see explosions, acid, and deployable turrets everywhere as you and your teammates fight to defend your Overcharge vats. Playing through Chaos Squad will grant you random bonuses based on how well you do, such as currency, new gear, weaponry, or weapon upgrades, which will help you further in both the multiplayer and the single player modes. 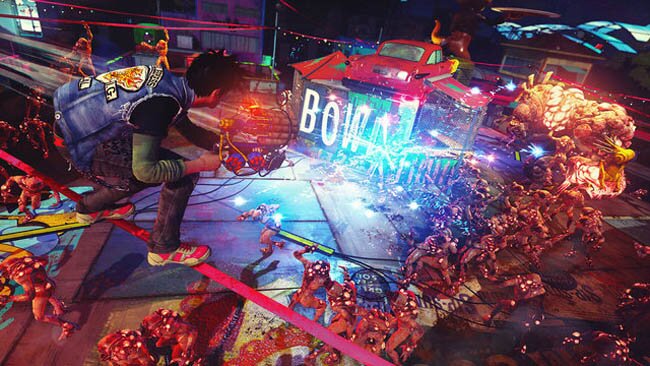 Sunset Overdrive is absolutely gorgeous. The whole game is filled with neon colors that are vibrant and enticing. I didn’t notice a single instance of screen tearing or glitching throughout my many hours in Sunset City and the Chaos Squad, which is something that is hard to come by while games all around us are releasing with a multitude of glitches and various game-breaking issues. The beauty, uniqueness, and charm of Sunset Overdrive’s graphics are a breath of fresh air, making it easily one of the Xbox One’s best looking games thus far.

Not only is the music incredible, but the voice acting is just as perfect, as every character is enthusiastically portrayed in a way that truly gives them life and really compels you to move forward in the story to find out what happens to these characters. Sunset Overdrive is nearly perfect. While the action-packed, rail-grinding gameplay might be hard to master at first, you will surely find yourself to be a traversal master in no time. Sunset Overdrive is enthralling, beautiful, unique, and exciting, making it an absolute contender for Game of the Year 2014.