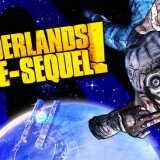 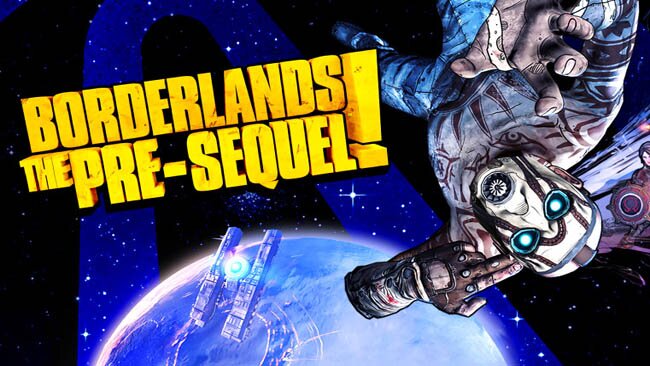 Borderlands 2 was our game of the year back in 2012 and there is no surprise that when Borderlands the PreSequel released, we were quick on our heels to have a whack at it. It’s always fun when you have Claptrap on your side, minions, or play as a new vault hunter that has done some wrong. There is so much chatter on the game itself that we were skeptical on how it would turn out. The first person shooter is nothing lackluster and strives for excellence in all categories.

The story takes you back to the Vault hunters on a floating Sanctuary. Being questioned, all the vault hunters just want to know why. Brick and Mordeci take off while a couple of the other Vault hunters question your character why. Granted, at this point we are stuck in the dark with no light to be seen, the game begins the story. We’re stuck on Elpis and with a jamming signal being sent out, it is the job of the Vault Hunter to stop it. This leads to an unlikely alliance and also very unpredictable since you pair up with Jack. There are also a few unlikely people that we run into that don’t seem so nice and it ties the story in prior to Borderlands 2 very well and then there is the Meriff. It also makes going against Jack in the second game more fun when you play through it after you have ran through the PreSequel because you gather a hint at why he is such a butt head.

There are mini side missions that bring Sir Hammerlock and Moxxi to the forefront but not enough to really hint at what is to come in the game. Again, it would give a sufficient introduction to the characters for the second Borderlands game and Gearbox has also left the door ajar to continue the story how they feel is necessary for the hopeful Borderlands 3. Please take note that the main mission itself isn’t entirely confusing but rather it is the timeline of things itself.

I played as Nisha, the gunslinging Sheriff and is incredibly fun to play when she has her gunslinging pistol ability up. She’s know for her spunky and brass remarks and we’re sure Jack may have had a thing two with her. Claptrap is also a good way to go for those wanting to have a little more fun with the abilities or are a little free spirited in Borderlands since his abilities cycle through a handful of options from the previous Vault Hunters. It does get frustrating at times since there is no real opportunity to predict what you will be getting but still very cool. Wilhelm has an insane ability bringing two drones to the rescue; one is used for cover fire and the other to heal you and any other players along side you. Depending on the tree you pick, he could form more into a robot as you select options within the tree itself. Athena the Gladiator has a kinetic ability that allows all bullets to be absorbed by her shield when she brings it out meaning there is no damage done to her whatsoever.

Skills trees are set up in a similar fashion but obviously are aimed towards your specific character of choosing. Nisha for instance, Showdown is her action skill and there are three trees based on how you aim to play. There is a skill tree titled Law and Order which enhances shield capacity and damage. Also when you take 15% of your health, a stack of order is provided which will double your damage. The ability is also beneficial when you’re around a cluster of the Iron Maiden’s and they seem to be enclosing fast. The ability does astonishing damage. The other trees are Fan the Hammer and the Riflewoman. 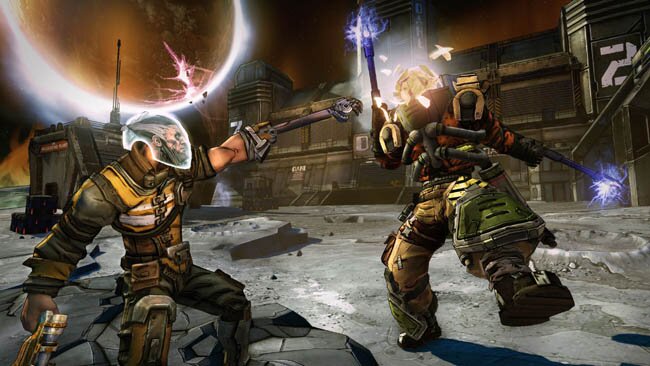 Speaking of abilities and trees, guns are the new main attraction on the game, more specifically the laser guns. Not only do these new guns have their own abilities, such as freezing or flames, but are fun to shoot despite the massive inaccuracies in them. The laser guns are more for the close to mid range than sniping or far distances. I like the freezing laser guns because of the ice blocks they form. In larger groups, freeze one, two or three and bring the fire for the rest and then attack the last when they are back from the frigid cold.

The level cap in the game as in Borderlands 2 is level 50. Running straight through the main missions, the level cap can run in the early to mid twenties meaning plenty of gameplay. The main story itself for me to play, including all the dying I did sent my character to about level 21-22 at the end of the very last boss so depending on play style, it could vary in the lower to mid 20s. Not only do you have a cap at 50, but there are three other characters to play and presumably more when the DLCs launch. I even ordered the DLC pass and can’t wait to see what is released as far as playable characters and maps to aid in bringing the PreSequel and Borderlands 2 together, granted it could be a while before we even see the first one.

One of the main annoyances that I found with Nisha was that the oxygen thing was a bit of a pain. When your air gets down to the halfway point, you are notified but then you hit rock bottom and it causes a ruckus for the player. Landing on an oxygen patch in the ground is beneficial but sometimes they are few and far between. Nearby buildings are also beneficial since they more than likely have an air lock on them so you can breath freely and not worry about finding time. It’s not much of an issue but I have found that as I level my character, it is less of an issue. Another benefit to this though is when you are on a vehicle, there is no need for air.

For a previous generation console, the graphics look amazing and surprisingly enough, I wasn’t wishing it was on the newer consoles. Although, when 2K Australia decides to put Borderlands the PreSequel on PlayStation 4 and Xbox One, I’ll be first one in line. Even with Borderlands 2, it will be a joyous and glorious binge. I love the comic strip style, colors and graphics because it gives it’s own world a specific look. I love that they have maintained this look throughout the franchise and updated it accordingly over the years. Had 2K Australia undergone a massive change, it probably would have changed the scale a little.

I’ll be honest, there are games out there that attempt to be funny and they fail miserably. Borderlands The PreSequel is something out of the ordinary and 2K Australia didn’t take many chances but stayed consistent in the audio department. While this is a good thing, it’s still entertaining to listen to the copious puns and have a chuckle of two and it suits the game perfectly. 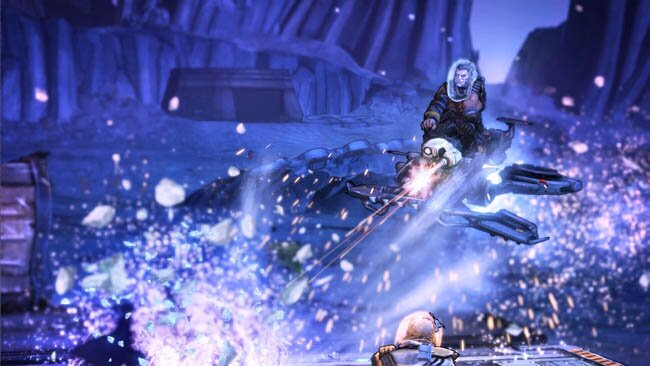 As a fan of the series, I had hoped the game would live up to it’s hype. Many people may argue that the game feels just like Borderlands 2, but honestly, the story makes it feel like a different game and so do the new Vault Hunters, the guns and missions. It does feel like the previous game because of the franchise and it’s a common factor. Had there been massive changes, it would have thrown off the franchise completely and sent fans of the gaming series overboard. What’s not to love when Claptrap is a playable badass or you can run around as Wilhelm who has both a healing surveyor and one that does damage. 2K really wants to make the franchise work and with Borderlands The PreSequel, they were able to create a story that they can enhance on down the road and create the never ending world of Pandora or Sanctuary, however you look at it, and allow gamers to explore all the possibilities with guns, trees and characters. The DLCs are on the forefront and we have high hopes for them when they arrive in the future