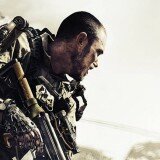 Call of Duty is back for another round with Advanced Warfare. Many have had their hopes on the series and lost hope within the last couple of installments, but needless to say, we are thrilled at the new add ons, the mechanics and the improvements that have come our way. The final product from Sledgehammer is outstanding.

The story begins in North Korea, a group of groups are sent inside of a capsule which will send them to the ground safely. With a target insight, Mitchell is ordered to leave his partner when a bomb is planted and the door shuts randomly. As the plane goes up in the air, we lose sight of what is going on. It happens so fast. We just know that as we are being pulled away, we look down and have no arm just above the elbow.

At random, we pay tribute to a random member of the military, which throws the story off but goes deeper into Atlas. When we look down at the coffin as we pay our respects, we are in the shoes of the armless man, Mitchell, who lost a war buddy. After being discharged from the military, Atlas owner Jonathan Irons, offers a position with the company and a new arm.

Inside the facility, the on ground team does a simulation that will gear them in real scenarios on the battle field. When Mitchell’s arm goes haywire, the scenario is stopped and he gets a tour of Atlas. His arm gets calibrated and then runs the scenario all over again, runs it smoothly the second time around. From there, the story continues through a personal hell for the characters, especially Mitchell. Each chapter or mini level you finish in the campaign, you earn points to advance your gear. Some of these include increased range on tactical or lethal grenades, sprint capabilities and flinch. New equipment has been added as well; this list include new weapons and gadgets that any tech would love, even the exo suits add value to the gameplay as they truly are customizable. Grenades are controlled to be smart grenades, which gravitate towards the target. EMP grenades to take out electronics, and threat grenades which show the target’s location in red in any location. Threat grenades have got to be my favorite amongst them so that in tight situations or with rooms of packed troops, the tactic changes to laid back, shoot them out one-by-one over run and get yourself killed.

The mechanics follow from the previous Call of Duty games, but add a couple minor changes. It will throw the player off but the first several minutes allows a tutorial to get the hang of these. One of them being the grenades, the others being the cloaking devices, the double jumping and the gliding that takes place of the dolphin dive or the run and jump maneuvers from Black Ops and Black Ops II. Pulling a Spider-Man and climbing up walls with grips is a new normal as well, but isn’t overly used. A lot of the gear and new tech seems a little far fetched, but again, it isn’t overly used and the story takes the main focal point in the game. Together the technology and the story of the game compliment one another.

Multiplayer maps are well balanced, different sizes and I can say that the spawns are not so bad as Ghosts or in Black Ops II. Of course, using the new exo abilities allow a player to cloak, have silence when traveling and so on, just a perk that is only available for a short period during a life span. Die and respawn back, the ability is available again for another while. Using the ex ability is just extra tactic on a player.

The graphics on both Xbox 360 looks amazing but with the upgrade on Xbox One and PlayStation 4, the graphics are above and beyond what we would even expect to see in any other Call of Duty game. From the trees and hills to the ground and brick work on the houses look more realistic then they have in past games. On the people, the hair, the pores and the facial features look more real than ever before. On the Xbox 360, it was more flat, the lighting wasn’t as great and the graphics looked good, but compared to an Xbox One or PlayStation 4, it stands out immensely.

From the understanding, Call of Duty: Advanced Warfare got a brand new engine that was rigged especially for this installment. Sledgehammer made an investment, taking high stakes and it paid off. Graphically, this is the most beautiful game to date. 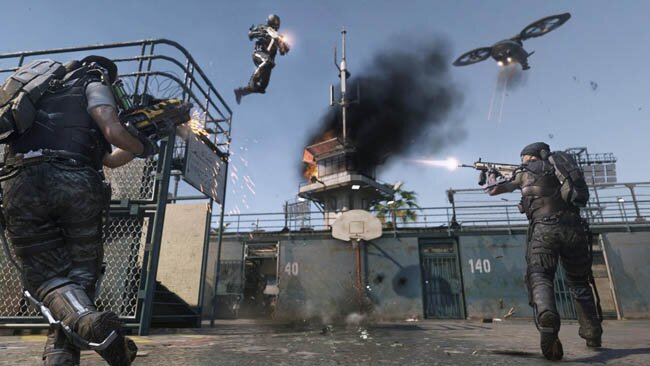 Believe it or not, the sound is also a little better than previous games within the franchise. We hear the chatter between mates, the “look out, I’m reloading” and even laughing amongst the AI. The sound of flying lead, explosions and radio chatter also makes for hours of entertainment. The score to the game even compliments the in game and in lobby mood, creating an energetic atmosphere. Kevin Spacey and Troy Baker also do a fantastic job voicing for Mitchell and Atlas Corporation President Jonathan Irons.

Overall, this is truly a game for the Xbox One and PlayStation 4 consoles but if you haven’t upgraded yet, prepare for the graphics to be a little lack luster. The advanced tech that we see in game isn’t overplayed nor overused, making the game very well balanced. The storyline is intriguing and fun, the controls are simple, the online multiplayer is even more fun.

Call of Duty: Advanced Warfare is a great investment on the newer consoles and has restored my love for the series all over again.