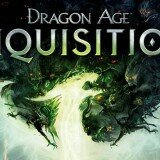 Immediately after starting up Dragon Age: Inquisition, the third installment in the successful franchise, it becomes clear that this is no ordinary BioWare game. Decision- and conversation-based linear games like the first two in the Dragon Age series, as well as their other highly successful title Mass Effect, have set a standard of gaming to be expected from the company. With their focus on character individualism, romancing, and creating a strong team of allies, BioWare games have developed a monopoly in social gaming. However, with games like Skyrim and Dark Souls finding huge success on the market, it’s clear that open-world RPGs are paving the new way in gaming. BioWare took this idea and many fan suggestions into consideration and went on to create a marriage of social and exploration gaming with Dragon Age: Inquisition.

Taking place one year after the events of Dragon Age II, a massive explosion opens a dangerous breach in the Veil into the world of the Fade. The Veil, a metaphysical barrier that protects and separates the world from the Fade, loses some integrity and horrific beasts start to flood through. This causes a deeper divide between the Mages and Templars, torpedoing the fledging attempt at peace. War seems inevitable. The player awakens in the wreck of the eruption with no memory and a peculiar marking on one hand that appears to hold the power to close smaller rifts in the Veil. With some familiar faces from previous installments such as Cassandra alongside, the player heads out on a journey to create and unite an organization, the Inquisition, which can fight the threat. The player must build a reputation and the power to influence others to win them to his cause. But doing so also brings the player into dangerous situations and into battle with deadly monsters.

One of BioWare’s biggest promises to fans was an improved combat system in which the player would feel that they had more control. The combat structure of Dragon Age: Inquisition progresses forward from its predecessor. Bringing back the tactical view option offered in the first installment, Dragon Age: Origins, and creating a more fluid and attractive action bar were two of the intelligent choices BioWare made. The combat feels much more intentional and decision-based, though still not quite as open ended as a typical first-person combat sequence.

The UI of the newest game is also a massive improvement. Character customization offers many more options, including things as detailed as make-up, eyelash length, and ear position. These attempts to offer the player more overall game decisions is a smart one, and helps elevate the game to a higher RPG position. Weapon selection and upgrading are also stronger elements in Dragon Age: Inquisition. The wide variety of weapons and crafting materials to discover makes the player more curious, more likely to want to discover them, which works well with the new open-world elements. The locations are expanded with additional areas to investigate and non-linear side quests to discover. 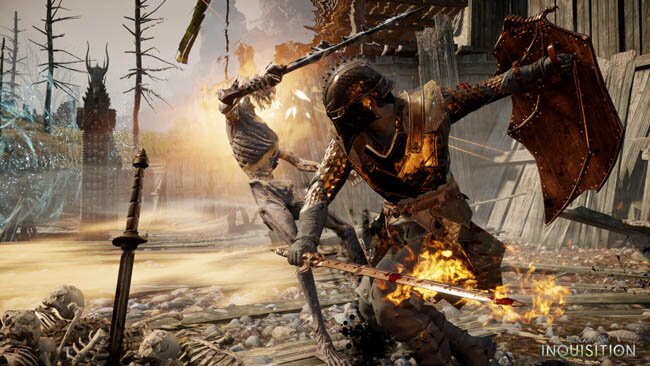 The overall design of Dragon Age: Inquisition is very reminiscent of previous installments. With a medieval tone, the new dark monsters and elements added to the game stand out in stark contrast to the beautiful countryside and green forests. Character designs are beautiful and unique, most notably being the player’s own. As with all previous BioWare games, the characters feel alive and personal, and in a game where so much attention is paid to the characters as they interact, this is a great thing. The design of the new UI is also exceptional, easier to navigate and clearer. The game features an overall style that is unique to Dragon Age and is consistent and hauntingly beautiful.

Talented voice actors have always helped to elevate BioWare games above the rest, and this is the case with Inquisition as well. Unique voices from party members help to keep the game conversational and special. The score for Dragon Age: Inquisition is also very lovely. Ranging from invigorating battle music to charming melodies, this is music that keeps the player wrapped in the atmosphere of the game. 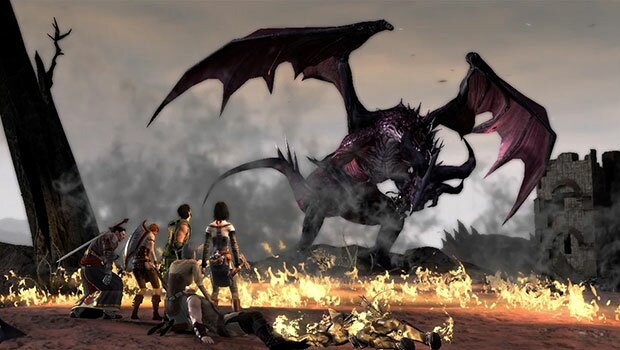 BioWare proves with their newest release to be a company that takes their fans’ opinions seriously, and one that backs up their promises. Providing so many new elements and improving on the old, Dragon Age: Inquisition finds a perfect balance between its two previous games. Yet BioWare still injects some of the ideas that are big in gaming right now to keep things fresh. Dragon Age: Inquisition has something for everyone to enjoy and is a great step forward for the future of the Dragon Age franchise.