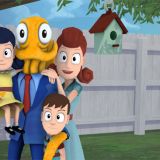 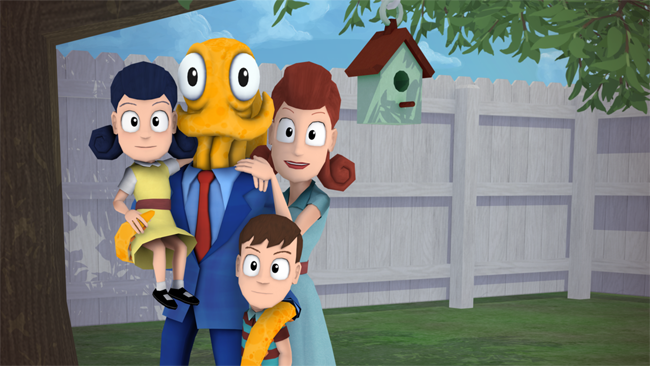 Octodad: Dadliest Catch is a game which has sparked curiosity among the gaming community to say the very least. The developers have gone to the greatest lengths to show as little as possible of the gameplay, the story and the control-scheme to keep mouths watering. It’s probably one of the reasons why the game is such a success. It’s the humour of the broken, glitchy goat simulator, but with an endearing story too.

Octodad is the story of an octopus who falls in love with a human woman. Yes, it’s every bit as barmy as it sounds. Hunted by a deranged chef and terrified of aquariums, Octodad tries to overcome the hazards of everyday life like shopping for groceries or dressing for his wedding day. However apart from a surprisingly dramatic final act, the game’s tone stays consistently light as Octodad fights to for his family life, tumbling over tables and chairs, and trying to avoid the dangers the human world poses – even if his irritating son is worth none of the fight. I found myself telling little Tommy to shut up more than once, the little brat.

The entirety of the gameplay relies on a player trying to control Octodad’s limbs, walking, picking up items and throwing them around the various levels. Octodad’s suction pads are both a blessing and a curse. Yes, the items he needs stick to him easily and generously, but so does everything else. Often Octodad could be seen dragging chairs, tables and dining sets around for up to ten minutes, but it just added to the hilarity. Interestingly, playing with a partner (particularly on the PS4) was easier and more fun than playing alone. With clear communication and somebody to enjoy the antics with, it’s highly recommended for indulging in couch-play.

The inhabitants of the nameless suburban town he lives in are deliriously gullible to Octodad’s disguise, be he dressed as a captain, mascot or doting husband, a surprisingly reluctant perception meter along the bottom of the screen tracks whether or not the characters in the game recognise Octodad for his true form. However in a similar vein to the story, the gameplay stops being funny enough to induce giggling fits later on and just amusing.

One interesting on-rails set piece lasting just a couple of minutes had Octodad swimming around a tanker being chased by a shark. Suddenly all of the control was ripped from player 2 in my co-op playthrough and focused on a single button on player 1’s controller. All player 1 could do was bash this same button over and over while the game guided Octodad in a particular direction. After playing the first half of the game with meticulous planning and control over two controllers and numerous buttons, the game chose to rip control away for the sake of the most boring part of the game. Granted, this allowed the player to feel as punished as Octodad did at this point in his story, but it was still a clumsy set-piece.

Other than this moment, however, the rest of the gameplay was comical, hilarious and enough to put a smile on the face of any pair of gamers over its two-hour long campaign. Octodad is a short experience, granted, but it’s a very sweet one, with varied level design, an amusing character arc, and consistently enjoyable gameplay. 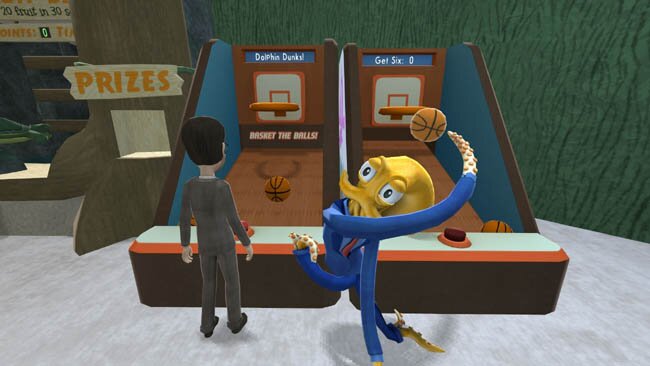 Octodad isn’t necessarily an ugly looking game. It’s bright and colourful with characters who look like they’ve been extracted from a Saturday morning cartoon, but there’s something about its blocky animation which doesn’t match the fluidity with how Octodad moves. When Octodad throws objects, there’s a light, airy quality to the physics which doesn’t quite feel right.

Also, the town appears to be populated by a total of twenty people, including Octodad, his family, and the villainous chef. I get the feeling there’s just one hairdresser there too, as all of the female characters don the same hairstyle, and despite the engine, the loading times are painfully long, especially on the PS4.

This complaint about character similarities can be used with the voice-acting as well. All of the female characters – with exception of Octodad’s wife – appear to be voiced by one person, and the same applies to the male characters. It’s a minor complaint to have, considering the game’s indie development, but it detracts from the experience slightly nonetheless. Octodad’s tentacles make satisfying slapping sounds whenever they stick to objects, and the soundtrack is timid, cookie and jingling, even if it’s not necessarily memorable.

Octodad is a rare treat. An original idea, funny gameplay that’s a pleasure to interact with and a story that’s insane and endearing all at once. Its indie development is clear in its presentation, but the rough edges just make the game that much more of a delight to play. Either grab it now or grab it in an upcoming sale, but if you want to kill an afternoon with a friend, play Octodad. It’s something you need to experience for yourself, and I whole-heartedly recommend it.