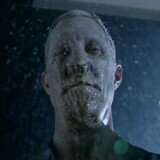 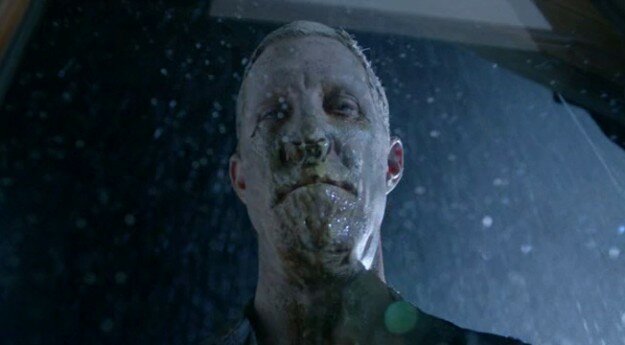 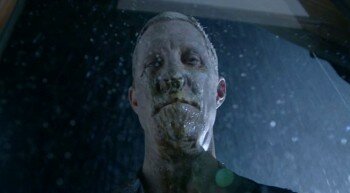 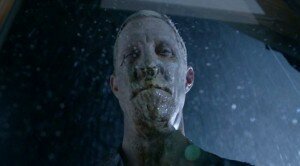 Well, if you enjoyed last week’s comedy-filled, over-the-top X-Files episode, then treasure it forever, because this week’s episode, “Home Again”, is a far cry from the absurdity of last week’s were-lizard adventure.

The episode begins with a sign declaring “You Are Responsible!’, which is a theme echoed throughout the entire episode. Then a man is murdered by means of his limbs being torn from his body. Yum. Not surprisingly, Mulder and Scully get the call and head to the crime scene, but Scully isn’t there long. She receives a phone call informing her that her mother has had a life-threatening heart attack. Scully heads off to visit with her unconscious mom, and Mulder stays behind to investigate. 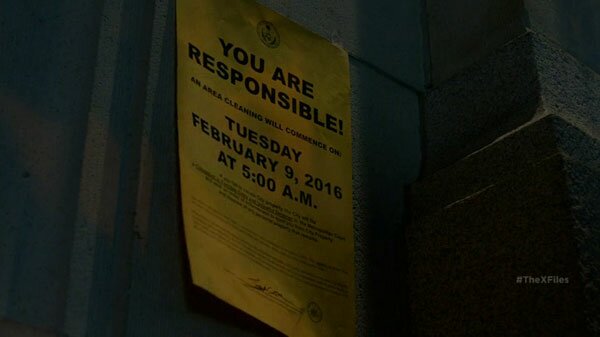 Mulder discovers that the limb-tearing man, known as the Trash Man, has a penchant for watching over the homeless community, and leaving street art and mysterious Band-Aids at the crime scene. It isn’t as crazy as I make it sound, trust me.

Meanwhile, as Scully visits her dying mother, the episode shifts to Scully’s guilt regarding giving up her child, William, for adoption. The first and second episodes of this season also dealt with this plot, and it clearly has yet to be resolved. As the sign at the beginning of the episode told us, responsibility is a key theme in this episode. and Scully feels more and more responsible for the decision to part ways with her son, and that decision weighs heavily on her conscience. 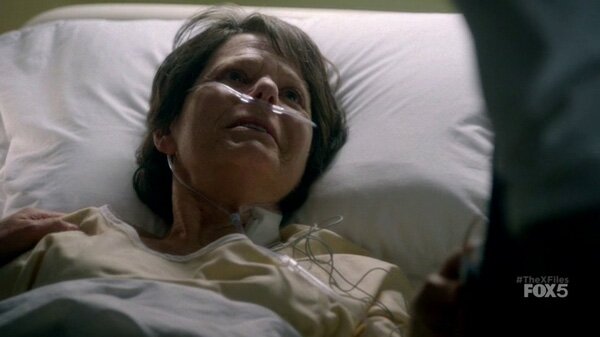 More people get limbs torn off, and the Trash Man is revealed to be some kind of mental projection/creation of a homeless man who is tired of being treated like trash. He feigns innocence over the murders, but Scully, now back with Mulder after her mother has passed away, reminds the man that he is responsible for the outcome of his actions, whether voluntary or involuntary.

The Trash Man, somehow, manages to elude capture after each murder. This is pretty predictable, as it prevents the episode from having to dive too deeply into what the hell the monster actually is. But, to be frank, the murder mystery of “Home Again” plays second fiddle to the emotion and drama of Scully dealing with her demons.

The episode ends on a really nice note. We see Scully and Mulder sitting on an eerie beach, discussing William. Scully reflects on the import of her mother’s last words, which were about William. Scully, with tears in her eyes, feels the burden of responsibility for William that she has been ignoring for years, and ends the episode with the statement, “I want to believe… I need to believe that we didn’t treat him like trash.” 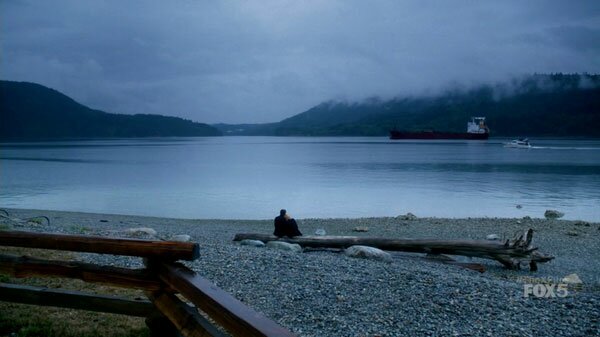 I really enjoyed this episode. I liked it a lot more than I thought I would, as I have never been particularly engaged with the William plot. But something was different this time. Perhaps it was the surprisingly good acting by both Anderson and Duchovny. It felt honest and it felt real, especially during Scully’s moments of loss. Duchovny was genuinely funny at times with his sly remarks and quick wit, and the Trash Man monster was gross, brutal, bloody, and dark. There was even a scene or two that felt unnervingly creepy. This season has yet to achieve that feeling until now. Each other attempt to be creepy has come off as campy and cheesy.

I have had my doubts about this season so far. It started on such a high note with the alien episode, and ever since it went back to the monster-of-the-week formula in episode two, I have been especially concerned. However, I’ve still somehow found myself content with how each episode, despite the lack of aliens, has turned out. But “Home Again” is a step above the rest, and may be the best episode in the season so far.