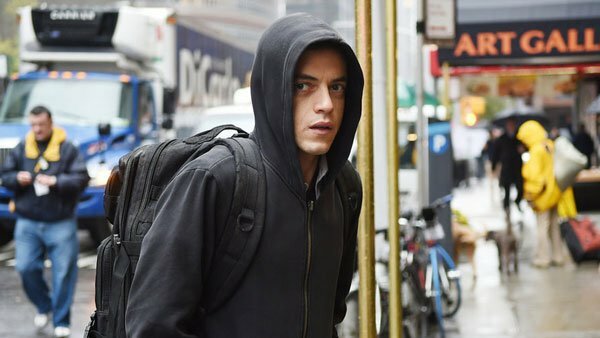 Last summer when Mr. Robot premiered on USA, I managed to catch and be blown away by the first couple episodes, but because I have a terrible habit of not keeping up with network tv, I quickly fell behind and opted to wait for the whole season to come to a streaming service. Now that it was recently added to Amazon Prime, I finally caught up and am beyond stoked for season two.

Imagine if David Lynch and David Fincher teamed up to make a cyberpunk science fiction series, and that’s basically what Mr. Robot comes across as; and yes, the final product is as awesome as that premise. It’s like the weirdly intoxicating feel of Twin Peaks merged with the mind-bending suspense of Fight Club and Se7en. Creator and Executive Producer Sam Esmail brings viewers a psychological thriller which provides commentary on everything from our society’s obsession with technology, to how that nature blurs the line between reality and the surreal.

The story follows Elliott Alderson (Rami Malek), a computer programmer who suffers severe social anxiety issues, and spends his free time in a virtual reality as a skilled hacker. In the pilot, he is recruited by a mysterious anarchist who calls himself Mr. Robot (Christian Slater), and becomes part of a technological revolution called fsociety. Among the leaders of the corporate empire they’re trying to bring down is Elliott’s psychopathic boss Tyrell Wellick (Martin Wallström), a tyrant desperate to become the company’s CTO.

Other characters include Elliott’s childhood friend Angela (Portia Doubleday), who is pretty much the only person who still cares for him; and fsociety co-leader Darlene (Carly Chaikin), who will stop at nothing to see their mission completed. Yet as Elliott gets deeper and deeper into this cyber-world, it becomes more difficult to determine what’s real and what isn’t.

One of the things that’s so striking about this show is its sheer filmmaking quality. As dense as it is, there’s a Hitchcockian-level of cinematic artistry underlying each and every shot. At the beginning of each episode, we see an elaborately-staged introduction before the title pops onto the screen, which is usually accompanied by classical music. That’s where the Lynch-vibe comes in. Esmail intentionally keeps viewers confused and in the dark for much of the season, which makes the big twist in episode nine (no spoilers) all the more climactic.

Another element worth noting is that the series never diverges into any high-octane action, keeping the tone and story very much a smart, well-crafted thriller. At the heart of the series, it is trying to say something about how the government can monitor our every move and that life itself is being reduced to a massive data feed. There’s also the fact that fsociety is an obvious parallel to the real-world cyber-organization Anonymous. Sure these ideas have been explored in fiction time and time again, but the way Esmail brings such a unique lens and approach to Mr. Robot is what makes it so utterly compelling.

Likewise, the cast excels in making this world and these characters believable. Malek is a scene-stealer, brilliantly portraying Elliott’s internal struggles and his inability to connect with other people. I’m usually against the repetitive use of voice-over narrations, but here they feel incredibly organic, which is a testament to both Esmail’s writing and Malek’s performance. It’s rare that a character who’s so isolated from everyone and everything around him to be as engaging as Elliott. I can’t talk too much about Mr. Robot himself without venturing into spoiler territory, but rest assured that Slater gives a great performance as the Morpheus-like mentor to Elliott’s Neo.

Opposite them is the classically sinister nemesis Tyrell, who works with his equally corrupt wife Joanna (Stephanie Corneliussen) to ascend to the top of EvilCorp. Together, they form a Macbeth/Lady Macbeth duo, and the extent of their ruthlessness is exemplified on multiple instances. Wallström is chilling in the role, combining the adolescent nuances of Mad Men‘s Pete Campbell with the sheer brutality of a Frank Underwood-esque villain.

Mr. Robot is near-perfect television. Aside from a few dull moments here and there, the first season sets a new high for everything from science fiction to psychological thrillers. With its crisp drama and storytelling, multilayered characters and brilliant twists, this is one show you need to catch up on if you haven’t already before season two airs in July.

“Your reign is over!” “My reign has just begun.”[more]

Perhaps not the all-around penultimate climax we expected, but it’s[more]
Latest in Television: