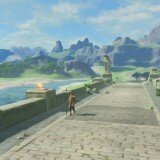 Expect Future Zelda Games To Be Like Breath Of The Wild

The Legend of Zelda: Breath of the Wild is an awesome game. You know it, I know it, and series producer Eiji Aonuma knows it, because the game may become the new baseline for future entries in the series.

In an interview with Japanese magazine Famitsu (as translated by Polygon), Aonuma said that this isn’t necessarily the last time we’ll see an open world game like Breath of the Wild. “I think that, in the future, open air games will be the standard for Zelda“, he said.

In the same interview, Aonuma also talks about other ways the series has evolved, such as making Ganon in this game more of a conceptual threat instead of a character as he was in previous games. This was done so that he wouldn’t get in the way of the game’s non-linear story.

As someone who’s personally spent almost 90 hours on the game, I will say that while I love the open-ended nature of the game and its story for giving us the best version of Zelda herself, I don’t know how I’d feel about Breath of the Wild being the gold standard for the series going forward, as it runs the risk of the formula going stale. I wouldn’t mind it every once in awhile though, and I think they’re are certain elements in this game that should absolutely become series standards, like different weapons to use, cooking, and voice acting.

The Legend of Zelda: Breath of the Wild is out now for the Wii U and Nintendo Switch.

Report: Nintendo Is Working On A SNES Classic
Search: