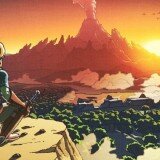 You may have noticed a few videos recently that show off the exploits of The Legend of Zelda: Breath of the Wild’s physics. These exploits range from breaking shrine puzzles, to exploring hard to reach areas, and even helping speedrunners complete the game faster; not only does Nintendo know of these exploits, they kept them in on purpose.

“One thing we saw at E3 [2016] was one of the NOA demonstrating staff, just in their downtime, figured out a way to use Magnesis to make themselves fly in a way,” said art director Satoru Takizawa in a recent interview with GameSpot. “And we’re like, ‘Okay, we hadn’t thought of that.’ We all had to go back and try it ourselves.” The trick in question involves laying two specific metal pieces on top of each other in just the right position and making it so that the bottom one pushes the second (which Link is on) up in the air, thus letting him fly.

In the same interview, Takizawa also revealed another feature from the game that was cut: stabbing your weapon into a wall and letting you hang on the wall and recover your stamina. “Until about halfway through the development, we had a spec where you could take your weapon and stab it into a wall,” he explained. “When your stamina gauge was dwindling you could stab the weapon and kind of hang out and rest there.”

The feature was removed because the team not only felt it was unrealistic, but that it actually limited players. “Mr. Miyamoto heard of the concept [and] said, ‘you can’t stand on the tip of a sword. This is strange,” said Breath of the Wild’s director Hidemaro Fujibayashi said. “And then we explained, ‘no no no, you stab it in.’ Then he’s like, ‘No, it’s not going to work.’ Another idea is that it’s very hard to actually stab a sword into a big piece of rock. We considered that you can stab them into cracks or crevices in the wall, but then you can’t freely use that feature anywhere you want, so I decided not to implement it.”

The Legend of Zelda: Breath of the Wild is out now for the Wii U and Nintendo Switch.

Report: Nintendo Is Working On A SNES Classic
Search: