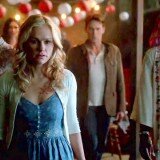 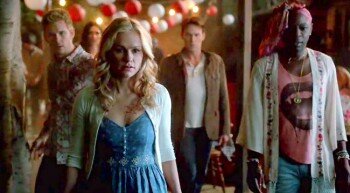 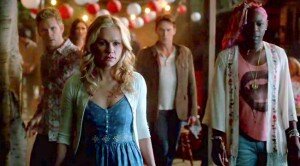 FOUL! Ah, Nope. That’s a black-hole-defying, double sky-scraper-middle finger NOPE! Tara. Tara. Tara. What a #@$%ing waste. (But my intuition tells me not to give up yet.)

Last we saw of Bon Temps, the Vampire-Human mixer, hosted in an effort to unite and protect the community from Hep V contamination, drew a horde of ravenous Hep-V Vamps. So, for the opening of True Blood’s Final season, we get treated to a massacre where humans and clean vamps and infected vamps alike are all getting ripped apart. It was a bit of a showcase brawl where Sookie gets to use her light on a vamp that asks, drooling, “What are you?” Bill gets vicious, Alcide tackles some vamps as a wolf and several main characters get the take home dinner kidnapping. Including Holly, Arlene, Nicole, Jane Bodehouse, and Deputy Ellis.

We also see Tara fight an infected vamp to protect her mother and, once the carnage settles, we see Lettie Mae sitting next to a puddle of gore whimpering “they killed my Tara, they killed my baby!”

So, teasing Tara’s death at the end of Season 4 wasn’t enough torture to put Rutina Wesley fans through? Now we’re going to have her suddenly die, off screen, just to ramp up the drama? Cheap, True Blood. Really cheap.

Most fans, myself included, think Tara isn’t even really dead. Her supposed death is off-screen, so it could have been anybody lying in goop by Lettie Mae’s side. Also, the biggest indicator that most fans have pointed out already, Pam, who is Tara’s maker did not sense anything when Tara supposedly died. We’ve seen before just how powerful the maker bond is between vampires, we would have seen some kind of reaction from Pam if Tara was truly dead.

Aside from the possibility that Tara is really dead, it seems like it’s going to be ridiculous either way. If Tara is really dead, then the show will have spent more time building up and dealing with Terry Bellefleur’s death than it did (and likely will) with Tara’s. And I haven’t met a True Blood fan that hasn’t thought that Terry’s death was profoundly, utterly, maddeningly STUPID and POINTLESS.

If Tara is alive, then what will the point have been of scaring the characters and the viewers with her death? Is the show faking her death to set her up on a separate storyline for the season? Lafayette had a pretty meta moment when he said that he had grieved when Tara died the first time. It feels like the show went through a much more developed arc when Tara became a vampire than when it (again supposedly, at this point) kills her off. Almost none of the characters reactions or the shows season-establishing plot feel appropriate to the weight that Tara’s death should bring. Also, none of the scenes where Sookie or Jason or Lafayette reacts have music in them. True Blood always uses music to accentuate its more emotional scenes. If she does actually die, it will be the biggest main character death the show has yet had.

*SIGH* Anyway, as to the rest of the premiere…

In the upheaval of the infected vamp attack, Sookie overhears all the scapegoating thoughts of the people of Bon Temp, thinking of her as a fang-banging whore, slut, that this attack is her fault and all sorts of other petty bullcrap. Worst of all, she overhears Alcide’s thoughts, blaming her for her interest in vampires, leading her to storm out alone. Alcide finds her at the house again, angry with her for putting herself needlessly at risk. Sookie tells Alcide that she overheard him blaming her and Alcide argues that’s not fair. Sookie cries that she knows that, that she knows Alcide loves her as well because “Newsflash, I can read your f-ing thoughts!” Sookie neatly sums up what it’s like to know all the hurt and hate from every single human in this town all the time and says that she needs to be alone for now. Alcide gives her space.

Later that night, Sookie slinks back into bed with Alcide and the two exchange apologetic “love you”s.

Jessica’s boyfriend James, (recast between seasons 6 and 7) is assigned to escort Lafayette home, in accordance with Mayor Merlotte’s One Human One Vampire Policy. Lafayette is bonging and drinking, expressing his numbness about Tara’s death. James retells his story of being a conscientious objector during the Vietnam War and getting beaten, nearly to death by his friend’s father who blamed him for his son’s death in the war. Then he was turned, after which he decided that pain and fear and regret are useless. Bit cold for someone who, according to Jessica, is loving and kind and gentle. Also, it gets a bit homoerotic between Lafayette and James when he goes to drink from him. But vampire feeding on humans has ALWAYS had sexual subtext. There are a couple of other hints that James’s sexuality is a bit fluid.

Vince, a former contender for Sam’s office of mayor, sees Sam shift form his dog form into his human form, right behind a conveniently shot window blind covering his shifter junk. He confronts him, but Sam convinces him to remain silent until things settle down. Vince doesn’t strike me as the level-headed or forgiving type.

We see him again when Bill and Andy investigate a possible HepV Vamp nest. They do indeed find a vacated nest with the suspended corpses of five humans left to rot, and then Vince shows up with an indiscriminant vigilante gang. They say that they just want Bill, so Andy switches sides and says that there’s a bad history between Bill and him and that he wants to see Bill’s end. But when they give him a gun, he turns on a young man with a shotgun, telling him that his life will forever be marked if he pulls the trigger. The Vigilantes back down and Bill thanks Andy, but Andy makes it perfectly clear that the only reason he spared him was that he needs him to help find Holly and Arlene and the other missing humans.

Speaking of whom, turns out the Hep V Vamps are making a nest at Fangtasia. How appropriate. The old dungeon is where they are keeping the newly captured humans and Holly is doing her best to reassure Arlene and Nicole.

Jason and Violet encounter the same group of Vigilantes led by Vince. After Violet steals Jason’s law enforcement thunder, Jason lays down the law for himself and Violet, saying, they are going to #@$% right now, and that’s what they do, with vamp speed clothing tearing and position changing, right on the hood of his police car, out on the middle of the road. Good to know we have plenty of their power play scenes to look forward to.

Elsewhere around the world, we find Pam in Marrakesh, standing in a tub opposite another man in a tub with another between them, spinning the chamber of a six shot revolver, working a crowd of betters. It’s a game of vampire Russian roulette. Both Pam and her contender hold the revolver to their chest twice and take turns pulling the trigger a total of four times between them. Finally, the other man gives a final lecture about belief and love, despite Pam’s characteristic defiant snark, before pulling the trigger a fifth time and exploding neatly into the tub.

Pam is desperately searching for Eric, moving quite a few fat stacks and interacting with some shady characters to get intel on her lost maker. Particularly notable is her refusal to feed on a young offered girl, even though she’s apparently not fed in some time.

Lettie Mae isn’t taking Tara’s “death” very well. At Reverend Daniel’s household she’s delirious with hallucinations of Tara that we the viewers never see. Willa, Eric’s latest progeny made during season 6 is their vampire partner. She’s lost with Eric and Pam gone and Tara “dead”, so the Reverend offers his light tight shed to Willa, which she accepts.

With Andy gone from the Bellefleur house, off helping the town and tracking vamps, Jessica is left at house with her self-appointed duty to keep what’s left of Andy’s family safe, mainly the fairy child Adeline. Despite the murder of her sisters and nearly herself, Adeline and Jessica feel and implicit comradery, partly over the commonality of being young women and Adeline can see the compassion and the hurt in Jessica over the news of Tara’s death.

Their bonding over a discussion of hot boyfriends or possible boyfriends is interrupted by the arrival of an infected vampire who smells Adeline’s blood, a blood that is equally alluring to Jessica. Jessica and the vamp’s standoff lasts right up to the break of dawn, until, against Andy’s decree and against Jessica’s better judgment, Adeline lets Jessica into the house to stay in their attic. Jessica is visibly resisting the temptation to feed on Adeline, but convinces her to take a drink of her blood, so that Jessica will always know where she is and can protect her.

Next morning at the Bon Temp church, Reverend Daniels is reassuring the congregation. Sookie and Alcide show up and Sookie takes a seat behind Lettie Mae. When she goes to put her hand on her shoulder Lettie Mae, interrupts the Reverend to spit, “Don’t you dare touch me Sookie Stackhouse.” It’s obvious she Blames Sookie for Tara’s death, and again, all of the Bon Temp resident’s thoughts of ridicule come pouring in again. But Sookie doesn’t walk away this time. She says, incredulously, that she can hear them all and that she may have brought her share of trouble to town but that she loves the town and its people as much as any of them and that she knows more about vampires than any one, so they’d better let her stay and help.

Maybe it’s meant to be a recapitulation of the theme of ostracizing the nonconformists, and it is the first time in a while that Sookie has listened in on the whole town like this, but everybody blaming Sookie for this feels especially petty and simple minded even for Bon Temps. That said, you can’t set expectations of mob mentality very high.

Perhaps the most interesting and smallest detail of the episode was the loud whistle that sent the Hep V horde speeding away during the attack at Bellefleur’s. Who or what called the vamps away? Are they controlling them? And if so, for what purpose?

Many fans of the show have conflicting opinions about by which season the show may or may not have dipped in quality or coherent storytelling or sympathetic characters. For my part, while I can VERY critical of those sorts of things in other shows, True Blood still finds moments of unapologetically raucous entertainment, dark comedy, interesting universe and biting commentary often enough to be worth watching. Also I loved the characters so much in the first few seasons that I’m invested in them and root for them, and so there is no question that I will see the final season to know what their ultimate fates will be.

However, I’m not going to hold back in calling cheap/lazy/repetitive/stupid tripe like I see it, like Tara’s true “death”. There’s still enough going on and enough potentially interesting character dynamics and situations that a worthwhile True Blood Season 7 may be salvaged from this clunky first episode.

The Game of Thrones Season 4 finale did a fine[more]