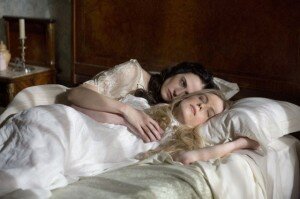 Finally! An episode of Penny Dreadful that has given me hope about the future of the series. As I’ve been watching this first season with hardly any expectations, it has been sort of a strange road these first 5 episodes. The pilot merged a great sense of fun horror/macabre visuals with a sense of unserious understanding for the supernatural. The show, just from its name, ought to be ridiculous, but a few of these episodes have gotten to the point where the show is taking itself a bit to seriously. Not that it’s totally a bad thing, but the series was getting somewhat slack for my taste in terms of character development.

As Vanessa recounts the story of her youth, and what led to Mina’s kidnapping by the Master Vampire, we also get to see the development of her partnership with Sir Malcolm Murray, the father of her beloved childhood friend. We find out that, even as a child, Vanessa had a particular adventurous and troublemaking side. One night, as she wanders through the hedge maze in her families vast estate, she comes across her mother and Sir Malcolm entangled in an affair. This event is supposedly what led Vanessa to embrace her darker more mischievous side.

Some years later, Vanessa is betrothed to Peter, but through a completely poor decision, ends up severing all ties between the Ives family and the Murray family. I admit some of these explanations are a little bit thin, not to mention overtly sexualized, but the fact that we are finally given some understanding about Murray and Ives partnership is refreshing. While most of the episodes before seemed disjointed, with each character grasping at their own invisible goals, “Closer than Sisters” finally ditches the ambiguity to give us solid reasoning and justification for watching these characters and their stories.

Vanessa falls ill after the falling out between families and during this time her clairvoyance begins to manifest itself. She is committed to a mental hospital where Eva Green gets to do some of her most physically challenging acting yet. I must say I enjoyed the references to the likes of Jacob’s Ladder, and even the comic book V for Vendetta. After a long time in the hospital, and many different types of treatments, Vanessa is left basically catatonic. She lies in bed without speaking, merely staring off into space. Peter, who we all know from previous episodes died in Africa, comes to visit Vanessa before leaving on his fateful trip. She prophecies his demise and while he claims not to have hear her warning. It seems pretty clear that a dark cloud is lingering over his head.

One of the best scenes of the whole show so far arrives towards the end in which some sort of devil or demon takes the form of Sir Malcolm Murray and comes to Vanessa to sort of free her, but at a terrible undisclosed price. She makes some kind of pact with the demon that is surely resulting in her current affairs. At the end of the episode it is discovered that Mina has been taken and enslaved by the Master Vampire, and Murray resolves to put aside his differences with Vanessa in order to conquer the greater evil. The difference is, Vanessa and Sir Malcolm have different end games in mind, and I honestly can’t wait to see which of them gets to follow through with their plan.

I was beginning to lose faith in Penny Dreadful, but I think the main issue from this show is stemming from an influx of characters and plot lines. Dialing things back in this episode was a brilliant ploy and one that I hope is used in some future episodes to give us more clarity on the different characters. Even though most of the characters don’t make an appearance, this is probably the best episode of the show so far, and the one that’s given me the most faith in what this show could potentially accomplish. We only have 3 episodes left this season, but not to worry because the show has been renewed for a 10 episode second season! Fans of the show should feel safe, while newcomers may be more open to trying a show that will last longer than 8 episodes. Next week’s episode looks to be a good one from the previews. Let’s hope it follows suit with “Closer than Sisters”!