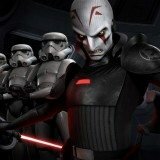 Dave Filoni knows how much people like the Empire and how they just have the look and feel of what the enemy really is. Dave knew that once they hit the scene that people will like it, but in the video, lets us know that between episode 3 and 4 of Star Wars allows enough time for new villainous characters to emerge that we may have not have been aware of.