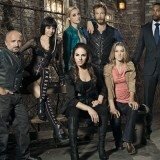 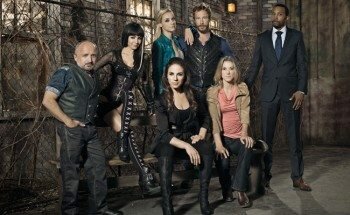 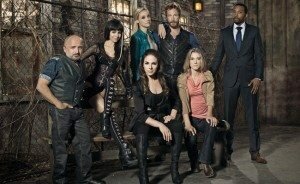 Paul Amos (Vex) and Rick Howland (Trick a.k.a The Blood King) showed up at New York Comic Con October 12th for a “Lost Girl” panel, autograph session and more. Canadian fans will see the series four premiere on November 10th at 10pm, with the new season airing in the U.S. on Syfy sometime in 2014. The season opener will also show a pre-show interview with the cast, questions on filming and takes on the show before the series unwraps for mythological creatures resurface. Autographs followed post panel.

Con attendees in the market for all things “Lost Girl” are able to purchase a DVD or Blu-Ray and get a six character button pack: Bo, Dyson, Lauren, Kenzi, Hale and Trick. Sorry, Vex! T-shirts are also available over the course of the weekend for $25 in S, M, L and XL (unisex sizes). Wanderer poster, tarot cards and bracelets will also be handed over the convention.

For the latest in “Lost Girl” news on the sexy succubus, her wolf lover, the human doctor, the blood king and others, check back regularly.