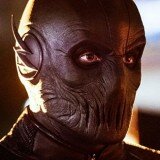 5 Epic Highlights From The Flash Season 2

After its stellar freshman debut, The Flash had much to live up to in its second season. While not without its faults, the series nevertheless delivered a solid sophomore run for the scarlet speedster, and one which contained numerous Easter Eggs for DC fans. To highlight some of the great things Flash had to offer over the past year, here are five epic takeaways from season two.

In episode 2, Flash of Two Worlds, Barry teamed up with the man whom he thought was Jay Garrick, The Flash from Earth Two. Though Teddy Sears’ character is later revealed in the season to be the villain speedster Zoom posing as Jay so as to steal Barry’s powers, this episode provided a gateway for recreating an iconic moment from the comics. In Flash #123, the cover features Barry and Jay side by side running to save someone. Toward the end of the episode this image was recreated in a glorious, albeit pretty forced, fashion; and the person they rescued was Patty Spivot, a Central City detective and Barry’s love interest for the first half of the season.

While the big baddie from Earth Two had been teased since the season began, it wasn’t until the episode Enter Zoom that viewers witnessed his terror in its purest form. After Wells and the rest of Team Flash used Linda Park to lure him to their world, the demonic speedster wreaked havoc upon Central City. Moreover, it’s his presence alone which intimidates. Whereas Reverse-Flash is a classic Silver Age kind of super villain, Zoom presents himself as a more ruthless and sadistic antagonist, making this episode one to remember.

After failing to stop Zoom on their own world, Team Flash eventually took the fight to Earth Two. Welcome to Earth Two remains one of the best episodes in the entire series. Instantly viewers are greeted with a wealth of fun Easter Eggs in this alternate universe, chief among them being: Mayor Snart, Robert Queen as Green Arrow, and the names Hal, Diana and Bruce appearing next to Barry’s phone. Though the really fun stuff came when we met Catelyn and Cisco’s evil doppelgängers, Kreisberg and company did a fantastic job throughout this episode building this world, and setting the stage for what role the multiverse will play in the future.

Barry Meets His Mother Inside The Speed Force

In the recent speed force episode directed by geek icon Kevin Smith and written by X-Men: First Class screenwriter Zack Stentz, the most emotionally gripping moment came when Barry encountered his mother. If you read my review of the Flash season finale, you know I had mixed feelings regarding the twist ending. However, this scene provides the only legitimate context for why Barry would risk everything to prevent his mother’s murder. The intimacy here clearly makes an impact on him, and particularly with him losing his father not long after, it gives him an emotional reason to want to fix things, even if it means rewriting the timeline and risking everyone else in the process.

The Real Jay Garrick Suits Up

Once it was revealed that the man in the iron helmet whom Zoom had been holding prisoner was both the real Jay Garrick and Henry Allen’s doppelgänger, the show gave us one of the best fanboy moments in the entire series by having him suit up. With John Wesley Shipp having played The Flash in the original live-action 90s series, it was inexplicably cool to see him don the speedster suit once more. And given that the chemistry between Shipp and Grant Gustin has been stellar from the very beginning, it’s nice to know that he can still play a role in this universe. Plus, given that Barry’s changing the past changes everything, anything is fair game now.

Conclusion: Season two of The Flash may not live up to its first, but that doesn’t mean it doesn’t have plenty to offer. With Flashpoint likely being the focus of season three, and an epic crossover between all four DC/CW shows slated for December, the future of this universe is ripe with possibility. Run, Barry, run!

The CW The Flash