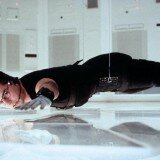 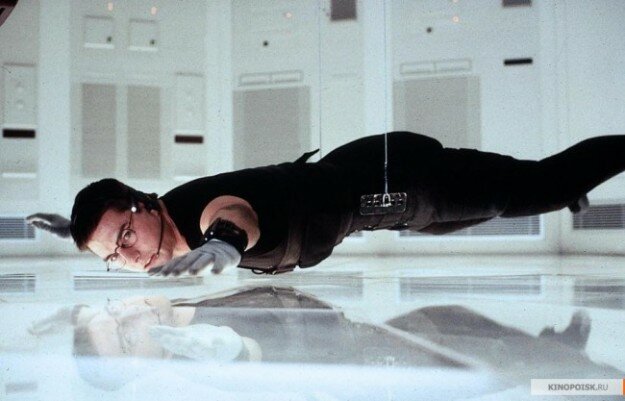 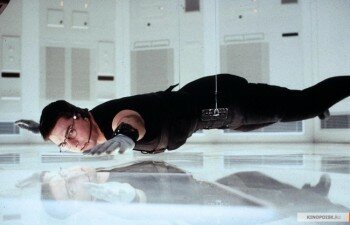 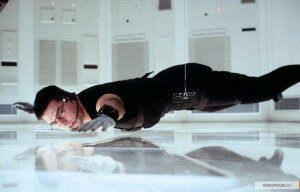 With the release of Mission: Impossible Rogue Nation now officially behind us, one thing is certain: Even at the age of 53. Tom Cruise is just as capable of being Hollywood’s number one action star as he has ever been.

Despite overwhelming negative press, and pretty much the whole world accepting the fact that Cruise is a pretty weird guy, we can’t deny that the man makes great movies. He’s been in plenty of stunning dramatic roles, but here we’re taking a look at Cruise’s top ten most fun, action-packed, motorcycle riding, full tilt sprinting, entertaining flicks.

The only reason that Top Gun isn’t higher on this list is because, like Cruise’s Top Gun co-stars, it just hasn’t aged well. Have you seen Val Kilmer or Kelly McGillis lately? Cruise definitely came out on top there.

But despite the fact that Top Gun is now nearly 30 years old (how old do you feel now?), it is still a high-flying, rock-n-rollin’, awesome movie with tons of humor, action, and beach volleyball montages. And don’t forget, Top Gun even won an Oscar for its breath-taking original song (awesome pun). By today’s standards Top Gun is pretty cheesy and dismissable, it had a huge impact on 80s pop culture, and that impact still hangs around today. Phrases like “the need for speed” and “you can be my wingman anytime” (perfect for reinforcing a bromance) are just as applicable today as they were in 1986. And if you’re going to try to tell me that you aren’t excited for Top Gun 2, then I’m going to tell you that you’re lying.

The plot of Oblivion is more confusing than the fact that people think Russell Brand is cool, and it may take a few viewings to get a good handle on the story. But each time you watch Oblivion, you will discover new details, plot elements, and aspects of the film that make it more and more impressive over time.

Oblivion didn’t do too well with the critics, thanks to the mind-numbing confusion of the story. But it is a gorgeous sci-fi adventure with lots of action and drama. Cruise is his usual excellent self, and is backed up by an interesting supporting cast, including Oscar winner Melissa Leo as the happiest antagonist you’ll ever meet.

Check out Oblivion’s Sally on our list of the Top 10 Coolest A.I.

8. War of the Worlds

This 2005 adaptation of the classic H.G. Wells story flew under the radar for many, and if you missed it, it’s worth a watch. In an interesting twist on typical alien invader films, the biggest threat to humanity isn’t the extraterrestrial attackers, but humanity itself. While the huge, tripodal aliens certainly cause their fair share of mayhem, death, and destruction, the most frightening and intense portions of War of the Worlds are when Cruise’s character, Ray Ferrier, and his family are threatened and attacked by their fellow humans.

It’s not very often that Cruise gets upstaged and out-acted during a film, but this is a rare exception. The entire movie is a tour de force on behalf of a young Dakota Fanning, who’s smart, sassy, and terrified character works wonders beside Cruise’s uncertain and optimistic one. War of the Worlds doesn’t have the same reputation of other big-budget alien films like Independence Day, Alien, and Close Encounters of the Third Kind, but it also isn’t a typical E.T. film, either. It is dark, thought-provoking, and downright scary.

What’s this? Tom Cruise as a villain?! I never thought it would be possible! Not only is Cruise convincing as Vincent the hitman in this underrated thriller, it may well be one of the best performances of his career. Plus, he kills it with that salt and pepper gray hair.

In Collateral, Vincent hires Max (played by Jamie Foxx, pre-mega stardom), a cab driver in New York City, and promises him a steep fare and a solid night’s work to remain with him while he takes care of business. But as the night progresses, Max discovers that Vincent’s work is a lot more sinister than he initially believed.

Collateral was dismissed as a sub-par thriller upon its release, but its reputation has since improved to the point that most critics would agree that the film is indeed some of Cruise’s best work.

The best thing I can say about Minority Report is that it blows minds. Its deep and rich plot is enough to keep you guessing throughout the film, and if you get tired of the brain exercises, there are plenty of action scenes to tide you over.

Minority Report is good enough to be a memorable film even if someone other than Cruise had signed on for the role of John Anderton, but luckily for us, Cruise did sign on, and delivered yet another stellar sci-fi film.

Apparently, Minority Report is even good enough to get its own spin-off TV series thirteen years after its release. The TV series will air on FOX starting on September 21, 2015. Cruise won’t be reprising his role from the film, but Steven Spielberg is a large part of the production team, so I think we can expect the show to be great.

Cruise is mostly known for two types of roles: serious and dramatic, and bonafide action star. Yet in Tropic Thunder, dressed to the nines in a fat suit, balding cap, and tons of extra chest hair, Cruise swore and danced his way into our hearts as one of the funniest and most ridiculous characters in this outrageous comedy. And being the most outrageous character in a film where Robert Downey Jr. plays an Australian actor who plays a black soldier is a pretty major achievement.

Cruise’s crass, loud, foul-mouthed character, Les Grossman, is enough to shock you, and also may require you to change your pants due to non-stop laughter. Rumors swirled around for some time regarding a Les Grossman spin-off, but that project doesn’t seem to be moving forward, which I think is for the best. Grossman’s hilarity is thanks to his short, R-rated outbursts, and works best in small segments.

Reacher is a character who doesn’t mess around, and neither does this movie. When he fights, he fights to win, and does so in the meanest and quickest way possible. When cornered, he’s not above potential fatherhood-ending, swift kicks to the groin, and will do everything in his power to bring criminals to justice.

Two words can best describe Jack Reacher: Criminally underrated. Or maybe ‘freaking awesome’. Or also ‘old-school action’ would work (that still counts as just two words). Reacher, based on the novel One Shot by Lee Child, is one of the most entertaining, refreshing, and action-packed thrillers I’ve seen in years. It is expertly directed by Christopher McQuarrie, who ditches all the industry standards of huge, vomit-inducing, shaky-cam fight scenes, and gets right down to business with brutal action sequences.

The role of super-spy Ethan Hunt is undoubtedly Cruise’s most lucrative and recognizable role to date, and with five M:I films under his belt, it’s hard to narrow down which ones are the very best (except for M:I-2. That one is obviously not the best).

But few films in Cruise’s repertoire are as memorable as the first M:I. From dudes getting crushed by elevators, to exploding fish-tanks and nearly fatal beads of sweat, M:I gave the world something they desperately needed in the early 90s, a suitable stand-in for the sub-par 007 films of that era.

This violent, futuristic version of Groundhog Day has everything you need. Incredible sci-fi action, plenty of comic relief, giant mecha-armor, arm cannons, and, of course, what kind of movie would be complete without huge, time-warping animalistic aliens?

From the moment I heard the plot of Edge of Tomorrow, I was hooked. I knew it would be an extremely interesting and entertaining film, and that Cruise would do nothing if not make it much, much better. Again, directed by Christopher McQuarrie, Edge of Tomorrow is the most intelligent time-travel film since J.J. Abrams’ Star Trek.

It takes a lot for a sequel to be a better film than its predecessors, and most sequels don’t live up to the hype. But M:I-3 is one of the rare exceptions. Before J.J. Abrams became a household name, he made this film his project and successfully revamped and reinvented the entire series. M:I-3 improves on every area where M:I-2 fell short, and took the series from a cheesy, explosion filled affair that seemed to be drawn straight out of Michael Bay’s daydreams, and transformed it into an intense, thrilling, and funny franchise.

What M:I-3 does better than any other film in the series is introduce an (almost) brand new cast of relatable and lovable characters, and featured one of the most evil and memorable film villains of all time. The action sequences are insane, and for the first time, Ethan Hunt felt like a human being rather than an indestructible hero. All future Mission: Impossible films will be hard-pressed to top this masterpiece.

Which Tom Cruise movie is your favorite? Did we miss any that you think should be on the list? Make sure to let us know in the comments!