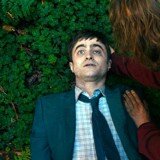 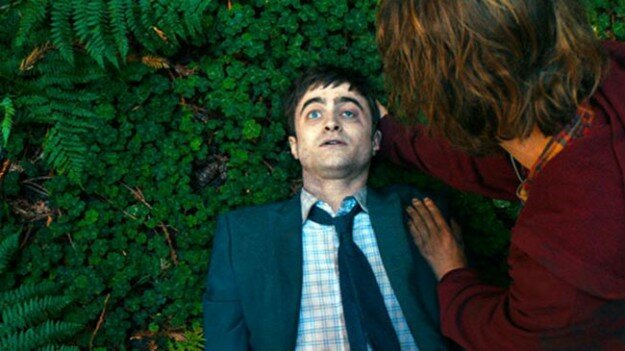 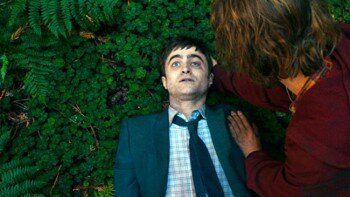 I have a confession which I feel my readers should be aware of: I haven’t gone to the movies much lately. Sure I loved Captain America: Civil War and a few others this year like 10 Cloverfield Lane, Hail Caesar! and The Nice Guys, but hardly any of the recent big blockbusters have sparked my interest. I’ve spent most of my summer reading and writing comics, and catching up on shows; and there’s nothing that will convince me to pay money to see Independence Day: Resurgence. Yet with all the mediocrity out there, I was holding out for just one film, be it mainstream or indie, to come out that I could adore. Thankfully, Swiss Army Man is just the gem I’ve been waiting for.

Yes, this is the movie where Daniel Radcliffe plays a farting corpse who washes ashore and befriends a man on a deserted island; and yes, the final product is as bizarre and subversive as you would expect from that premise. It’s as if Spike Jonze’s Her collided with the eccentric surrealism of Jaco Van Dormael’s European fantasy drama Mr. Nobody. If I haven’t lost you yet, then allow me to explain why you should see this one, and in theaters.

So yes, the movie opens with a corpse washing ashore just as the protagonist Hank (Paul Dano) is about to hang himself. And yes, Hank befriends the corpse and names it Manny, but that’s all within the first five minutes. Where the story really gets going is when Hank discovers that Manny possesses an array of supernatural powers which spring him back to life, which propels the two on a surrealist journey to return home.

That’s the film’s basic plot, but a movie like this can’t be described with generic summaries; it’s one that must be experienced in order to fully grasp. Over the course of its 90-minute runtime, it tackles love, isolation, transcendence, fear, joy, hope, defeat, absurdity and just about everything else that makes humans what we are. Is it a comedy? A drama? The best way I can describe it is metafiction on film. The filmmakers understand how unconventional and outlandish it is, and use this as an opportunity for satire.

But that’s the thing, it goes beyond humor to make us feel all kinds of emotions. A particularly great montage sequence, in which Hank cross-dresses in order to help Manny practice talking to girls, delivers on both an emotional and an aesthetic level. Dan Kwan and Daniel Scheinert, who wrote and directed, have made music videos throughout their careers; and here they bring the same kind of kinetic energy. In many ways the film feels like a series of interconnected shorts exploring Hank and Manny’s relationship, an approach which coincides well with its sheer ambition. I know every indie and Oscar-bait movie tries to answer what it means to be human, but this one genuinely excels at it.

The film makes multiple references to the Japanese children’s book Everyone Poops, a story which clearly influenced its thematic material. That book’s central message is that for all our differences, every creature on Earth poops. In the hands of a lesser filmmaker that idea would be converted into some kind of comedic raunch-fest, but the Daniels treat the material with the utmost philosophical reverence. Not too shabby for their feature-length debut.

Then there’s the brilliant performances from Dano and Radcliffe. Dano, who I think is criminally underrated, flawlessly portrays the nuances and complexities of Hank. He’s lonely, but not in a sappy or desperate kind of manner. His social awkwardness partly stems from losing his mother at a young age and having a troubled adolescence, but Dano takes this character a step further by exploring his desire to be like everyone else and teach Manny to do the same. It’s a true internal struggle which comes to a powerful conclusion in the finale.

Likewise, Radcliffe doesn’t just deliver laughs as the supernatural corpse. Manny is as inquisitive and innocent as a child, yet rather than remain a static figure whose only purpose is to help Hank find himself, he evolves just as much. The way his youthful desire to embrace everything about being human coalesces with Hank’s more cynical nature is what makes the story so inexplicably engaging.

Films as original and provocative as Swiss Army Man are few and far between. For film lovers it’s a must-see, and for the more casual viewer it’ll add a bit of variety to your movie-going experience. And with its exquisite cinematography and intoxicating soundtrack, this deserves to be seen on the big screen.