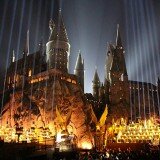 The final installment of the Harry Potter movies hit theaters in 2011, with the last book being released just four years earlier. But, as evidenced by last year’s Fantastic Beasts and Where to Find Them (based on one of Hogwarts’ required readings for first-year students), there is no shortage of demand for more Harry Potter nerdiness. Whether you are a casual or die-hard fan of the magical phenomenon, we have compiled a list of destinations where you can embrace the witch or wizard in you.

A crash-course in all things Harry Potter starts at Warner Bros. Studio in London. This unique walking tour takes you through some of the most memorable sets, including the shopfronts of Diagon Alley and the Gryffindor common room. Learn secrets about how animatronics like Buckbeak came to life and discover never-before-seen treasures inside Dumbledore’s office. Whether or not you’ve followed the rules, you can check out Professor Umbridge’s positively pink office as well.

In November, festive decorations commence and you can purchase tickets for a Christmas dinner–that includes entertainment–in the Great Hall.

Now for a touch of magic in the real world: The Georgian House Hotel in London offers special “Wizard Chambers” that look like Hogwarts dorms. The hotel says “children will love it,” but, honestly, older fans will get a kick out of the 4-poster beds, potion bottles, stain-glass windows, cauldrons, and other details that make this hotel so unique. Enchanted Chambers are also available for magical couples.

This stunning example of architecture was the inspiration for Hogwarts’ Great Hall. The Hall seen in the films is a replica, but the staircase that served as the entrance in Sorcerer’s Stone is very much real. Four centuries after it was built, the cathedral attracts countless fans of the series. Thankfully, there are no trolls in the dungeon or Howlers from angry moms, so this Hall is comparatively safer.

The Wizarding World of Harry Potter 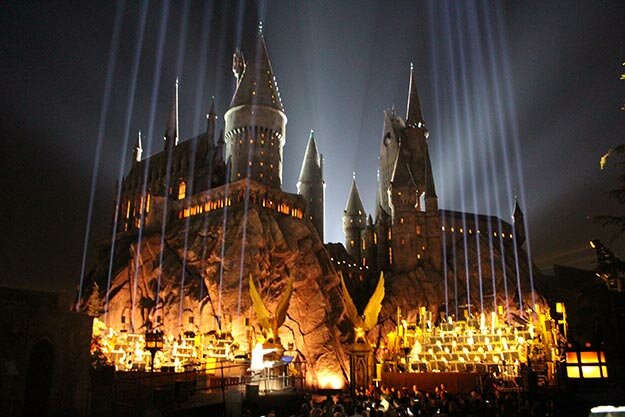 In 2016, Universal Studios in Los Angeles opened the most recent location for The Wizarding World of Harry Potter, and it is every fan’s dream come true. Drink Butterbeer at the Three Broomsticks, get chosen by a wand at Ollivander’s, buy your house robes at Dervish & Banges, or eat a chocolate frog at Honeydukes. Each of the three main wizarding schools puts on shows throughout the day: Hogwarts showcases a choir of singing toads, and Durmstrang and Beauxbatons perform signature dances.

But don’t limit yourself to the west coast: Florida features a TriWizard Tournament rollercoaster where you can choosevto ride the Chinese Fireball or the Hungarian Horntail. (Personally I think the Fireball is the most intense and, therefore, the most fun.)

At Universal Studios Japan, the Black Lake sits between Hogsmeade and Hogwarts, where bubbles intermittently rise to the surface. Merpeople? Or a giant squid?

The hallways of this Gothic cathedral may make the hairs on the back of your neck stand up, perhaps because it displayed the eerie messages of the heir of Slytherin and the Chamber of Secrets.

One of the cathedral’s lesser-known treasures is hidden among the cloister walls: an entry to a secluded oasis known as the Garth. It is also home to the Whispering Gallery, whose design allows a whisper to be heard from the opposite side of the room. While not a feature of the wizarding world, this trick allows you to cast a little magic of your own.

Not everyone can speak Parseltongue, but that might be for the best since you can visit the zoo where Harry “accidentally” freed the snake from Sorcerer’s Stone. Established in 1927, this branch of the London Zoo features snakes, turtles, frogs, and crocodiles. The staff would like to note that the missing boa constrictor has yet to return.

Every October, the small neighborhood of Chestnut Hill in Philadelphia goes all out for a 48-hour celebration of Harry Potter madness. The train that pulls into town is transformed into the Hogwarts Express, where riders can be greeted by Harry, Ron, Hermione, and Dumbledore look-alikes. The festival is geared towards fans of all ages and features movie screenings, Sorting Hat demonstrations, scavenger hunts for Horcruxes, and even a themed pub crawl. Don’t forget to attend the annual Quidditch Tournament!

This lovely castle in Northumberland is one of the many locations that served as the exterior of Hogwarts, most notably where the first-years received their first flying lessons. Their famous “broomstick training” lessons are offered frequently throughout the year and are free with admission.

King’s Cross in London is a special landmark in the Harry Potter series not only because it was one of Harry’s first steps into the world of magic, but also because J.K. Rowling’s parents met on a train that departed from the station.

The birth of the series attributes much to the station as Rowling was first inspired with the idea while delayed on a train headed to King’s Cross. She began brainstorming on a napkin, and the rest is history.

The themes of love, fate, and magic are Rowling’s and, ultimately, Harry’s origin story. So why not go and experience a little bit of the magic yourself?

8 Video Game Movies Coming to a Theater Near You
Search: