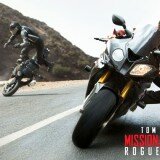 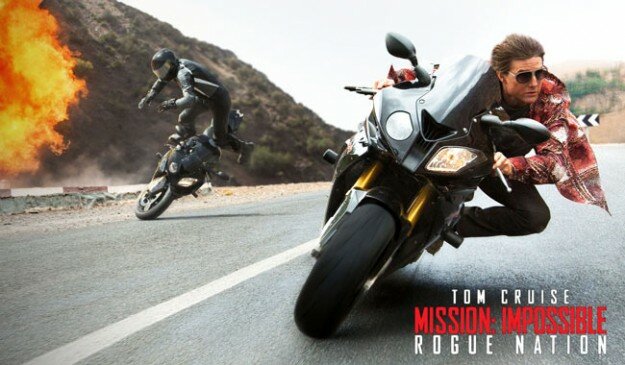 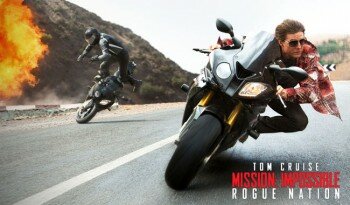 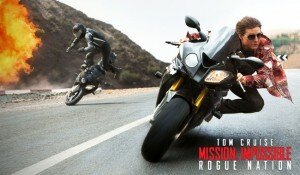 After stopping terrorist cells, biological warfare, missile strikes, and some unknown world-ending device known only as “the rabbit’s foot,” you’d think that Ethan Hunt (Tom Cruise) would be able to call it a career after nearly twenty years. But, luckily for us, he’s just not ready to call it quits just yet. Your mission, should you choose to accept it, is to brace yourself for the huge adventure and fun of Mission Impossible: Rogue Nation.

Like a few of its predecessors, Rogue Nation begins with a visual treat filled with action, laughs, and stunts, unrelated to the rest of the film. And Rogue Nation wastes no time in showing us what we really want to see, which is Tom Cruise hanging on to the side of a plane for dear life as the aircraft lifts off. This stunning scene, which literally made my jaw drop, would set the pace for the majority of the film, and show us that the fifth entry in the Mission Impossible franchise would be thrilling and action packed.

Following the incredible opening scene, Rogue Nation then begins with the dissolution of the IMF (The Impossible Missions Force, for which Hunt has been working all this time) due to its cavalier methods and sloppy mission execution. Meanwhile, Hunt is in the field, tracking down a rogue terrorist organization known only as the Syndicate. But with the IMF now extinct, in order to hunt the rogue agency, Hunt must himself become a rogue agent. How ironic.

It takes a bit of time for the plot to establish itself and for the numerous new and returning characters to become fully integrated into the story, and this is where Rogue Nation falls shortest. The opening half an hour or so struggles to find a balance between action, humor, and plot, and inevitably leans heavily on the action elements to carry it through sections of clunky dialogue and awkward scene transitions. However, once a very cool scene during an opera performance in Austria begins (a la Quantum of Solace, but much, much better), the thrills don’t stop for another hour and a half. The film is chock full of quick paced, globe-trotting espionage that sees Ethan and his team infiltrating underwater computer banks, kidnapping heads of state, and taking to the highroads of Morocco for a high speed motorcycle chase, all culminating in a public shootout in London that will decide the fate of not just Hunt and his comrades, but millions of lives around the world.

Cruise, as expected, puts forth a flawless performance as his most recognizable character of all time. He is charming, funny, and, most importantly, is able to complete mission after mission, often stumbling his way through as a barely conscious, beaten down mess. His stunt work is easily one of the standout factors of Rogue Nation. The aforementioned airplane scene is sure to give you chills of delight, and the motorcycle chase can leave you breathless, especially when we’re treated to a first-person view of Hunt weaving in and out of traffic at a dangerously high velocity. But more important than these moments is the underwater infiltration scene, which is certainly the most intense sequence in the film. Cruise trained with expert diving specialists in order to be able to hold his breath for a whopping six minutes, and filmed the entire scene in one long, uninterrupted take. Cruise’s dedication to his craft continues to astound me.

However, just as important as Cruise’s return to the series is the new, fresh face of Rebecca Ferguson, who plays a British operative named Ilsa Faust sent undercover into the Syndicate. Each M:I film has featured a female sidekick for Hunt, but none have ever been more interesting and more capable than Ilsa. Initially I didn’t think I would really care for this character, but she is strong willed, determined, sexy, skilled, and most of all, is able to fight side by side with Hunt and work in seamless harmony with him, never feeling out of place. Even longtime series characters like Benji (Simon Pegg) and Luther (Ving Rhames) don’t have that kind of chemistry with Hunt, and Ferguson’s performance is a real treat.

So, let’s get to the question you’re really asking. Where does Rogue Nation rank in the series? It lacks the presence of a memorable villain, which M:I-3 did better than any other. It doesn’t have the perfected, polished quality of Ghost Protocol. And, save for two scenes in particular, it doesn’t have the same white-knuckled intensity of the original film. But Rogue Nation is undeniably great, and fans of the series will not be disappointed, nor will casual moviegoers looking for an entertaining popcorn flick.

In short, while Rogue Nation suffers early on from uneven pacing, strange aesthetic choices, and occasional moments of poor writing and/or delivery, the fifth M:I film easily slips into the series as a heart-pounding, thrill-a-minute experience. The supporting cast, Ferguson in particular, and dynamic duo of director Christopher McQuarrie and star Tom Cruise, who have worked together in the past on Jack Reacher, Valkyrie, and Edge of Tomorrow, deliver an exceptional film that will leave you excited that Cruise has already announced another sequel.