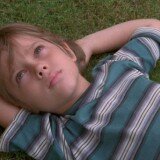 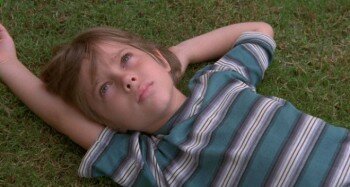 I feel as though I need to keep this review short and sweet. Starting off, this is a movie I think everyone should see. It’s essential viewing for film fans of all types. Boyhood was filmed over the course of 12 years starting back in 2002. The cast, crew and director would get together once a year to film scenes. The goal was to create a film about a boy’s life from first grade until he goes off to college. The reason for the patient shooting schedule was so director Richard Linklater, who is officially on fire these last two years, could get a natural aging process from his characters.

Boyhood follows the life of Mason Jr. (Ellar Coltrane), but more than just him, we follow his loving sister Samantha (Lorelei Linklater), his hardworking and devoted mother Olivia (Patricia Arquette), and the lovable, but in and out father Mason (Ethan Hawke). Over the course of 165 minutes, we follow Mason and his family from 2002 all the way up to 2014. The result is a film of uncommon beauty, depth, insight, and love. We follow Mason as he deals with the world around him. Through small snippets that seem almost like memories, the film may seem episodic at first glance but most peoples’ memories work in the same capacity. When we look back, it isn’t a perfect play by play, second by second. We remember that time we laid around watching cartoons. When our sister gets us in to trouble. The first time we met someone we truly cared about. Our friends, or families and our own lives are reflected back at us in the film.

Richard Linklater, whose never been afraid to dabble with the concept of time, give us what could arguably be his second or third masterpiece. The film goes from beginning to end without ever using flashbacks or crazy cgi enhancements. It was mind boggling for me to think back on Mason as a young kid. His blondish long mop of hair turned into a shortened, black and slightly tamed do. Like our own childhoods, we look back on the transformation as all too short.

What I liked best about the film, and what I’ve always liked about Linklater in general, is his unending patience in telling a story. He doesn’t go for large tragic moments, though at times that where you might think it’s heading. Instead he chooses to look at times in Mason’s life both good and bad, hard and easy, comfortable and otherwise. While some have complained that the narrative seems fragmented, I would argue that no one looking back on life truly sees it as a simple narrative. We are moving through life like everyone else, colliding, influencing and shaping the world around us, and being shaped by it.

One last thing that makes the film even more distinguished is the idea that, while we watch Mason Jr grow from a child to an adult, we also see the evolution of Linklater as a director. The earlier scenes are marked with the more careful construct of the man’s early filmography, moving at a more leisurely pace. As the film goes on and Mason grows older, so too does Linklater. The earlier somewhat lighter tones seem to get more mature and darker as Mason grows older. We see a distinct evolution in both the director, and the character he created, which is something you rarely, if ever see in filmmaking. The closest thing I can compare with is The Up Series, but that is a documentary so it’s hard to truly put them head to head.

In the end I knew I needed to see Boyhood again, and I’m sure after the second viewing I’ll want to see it again. It’s a film that can’t possibly be taken in a single viewing. I urge anyone who sees it playing at the local theater to buy your ticket without hesitation. I myself had to go multiple towns over but a movie hasn’t been so worth the price of admission in years. It should continue expanding each week, as it’s already doubled the budget in its limited run. So far, Boyhood is far and away the best film of the year, possibly of the decade. See it with family, friends, or total strangers, not only will it make you see the world in a brighter light, it will probably make you want to hug the person next to you.