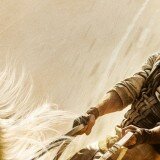 I don’t know why I never expected this. Why should Ben-Hur be somehow exempt from Hollywood’s ever-swelling pool of non-ideas?

Anyway. Today we have a first trailer for a modern moviemaking remake of the 1959 Hollywood classic, Ben-Hur. The plot seems pretty much the same about a wealthy Jewish nobleman in Jerusalem who is betrayed by his brother when Rome transitions into an empire and starts persecuting everybody. Judah Ben-Hur eventually escapes slavery and joins the blood sport chariot races for a chance at revenge.

And this is where the crux of the problem lies. See, the chariot race in the original Ben-Hur is one of the most famous and still most impressive action sequences in cinema history. Just take a look at it from a clip below.

Yup. A completely real built set, thousands of live extras and real horses with real stunts. Even when Ben Hur gets nearly vaulted out of his chariot and even at the end when the guy gets trampled under the chariot behind him, albeit with steel pads.

You can read more about the incredible 1959 production over at TCM.

And now they’re remaking it. Obviously with the help of CGI. Sure it will probably still be fun but it can’t compare to the visceral immersion and unprecedented spectacle of the original’s practical effects.

I just don’t see any realistic expectation this movie can fulfill. They would have better chances of success if they made almost the exact same movie, but with different character names and a different title. Don’t invite a direct comparison to the original Ben-Hur.

We’ll see how this race plays out in August.