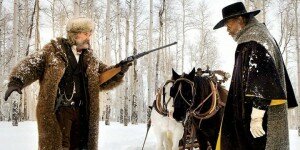 Now that I’ve had my fill of Star Wars for the week, I was eager to celebrate the holidays with some good old-fashioned Quentin Tarantino cinema. It being my brother’s Christmas present to me, I was ecstatic to see Tarantino’s new film The Hateful Eight in glorious 70mm as part of a roadshow taking place in select theaters across the country. As soon as I heard the music of the legendary composer Ennio Morricone play during the overture, I knew I was in for quite a treat.

I’ll go ahead and say that while this wasn’t my all time favorite Tarantino film (Inglorious Basterds still holds that title), it is one that displays the filmmaker’s top strengths and in many ways sets itself apart from the rest of his work. Though there is no shortage of exaggerated violence and overtly amoral characters, The Hateful Eight separates itself from a Tarantino revenge thriller like Django Unchained in that it isn’t quite the standard spaghetti western you might expect.

Set two years after the Civil War, the film’s basic premise is that eight nefarious people find themselves stranded together in a cabin during a Wyoming blizzard. In the opening act we meet the gruff, easily disgruntled bounty hunter John Ruth (Kurt Russell), who comes across as the spitting image of western icon Rooster Cogburn from True Grit. Ruth is on a mission to Red Rock to deliver the notorious outlaw Daisy Domergue (Jennifer Jason Leigh) so she can be hung; and along the way picks up fellow bounty hunter and union veteran Major Marquis Warren (Samuel L. Jackson). Shortly after, a former confederate officer named Chris Mannix (Walter Goggins), who claims to be the new Sheriff of Red Rock, becomes the fourth member of their company.

Upon arriving at this little shack called Missie’s Haberdashery, we meet the other members of the hateful eight. There’s Tim Roth as a charismatic hangman named Oswaldo Mobray; Michael Madsen as the quiet cowboy Joe Gage; Demian Bichir’s lonesome Bob; and Bruce Dern as the retired Confederate General Sandy Smithers, who spends the entirety of his screen time seated near a fireplace with a chess board in front of him. As the wintery weather continues to rage on, so do tensions rise between these unlikely acquaintances.

With the first half taking place on a stagecoach as Ruth and Domergue ride toward Red Rock, The Hateful Eight feels more like a play in many ways, particularly with Tarantino’s signature Shakespearean-esque dialogue. What’s more is that after the script was infamously leaked in 2014, an event which nearly killed the film, Tarantino directed a staged reading of the script. Like Reservoir Dogs, The Hateful Eight makes use of confined spaces and strong characterization to move the story forward. It’s an added bonus that Tarantino’s regular cinematographer Robert Richardson delivers some of his finest work yet, with the film’s aesthetic and elaborate set pieces heightened all the more by the 70mm format.

While the story is mostly chronological, it does take a nonlinear turn in the end, both as a nod to Pulp Fiction and to deliver its major twist. Some may find the climax a bit underwhelming, but as I mentioned earlier the way it’s executed veers away from Tarantino’s usual tropes. Rather than a traditional shoot em up finale, what the filmmaker has crafted is a mystery thriller which pays tribute to some of his earlier work as well as to a wide range of classic westerns. Though the characters and themes are overtly cynical, even for Tarantino, they are nonetheless wildly engaging.

The entire ensemble no doubt does phenomenal work, but it’s Tim Roth who delivers the standout performance. Filling the Christoph Waltz void left by this film, Roth gives his character the perfect balance of charisma and sinisterly mannerisms. His movements are inexplicably purposeful as he introduces himself, and it’s his facial expressions that will really capture the audience’s full attention.

Likewise, Russell and Jackson give strong performances as the guys who care nothing for who lives and who dies, so long as they accomplish their goals. And given that Jackson is a Tarantino regular, it’s easy to draw a number of parallels between his character here and his iconic Jules from Pulp Fiction.

The Hateful Eight is far from a masterpiece, but it will no doubt strike a chord with Tarantino fans old and new. Also I would highly recommend the 70mm roadshow as it only enhances the experience.