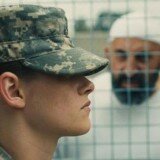 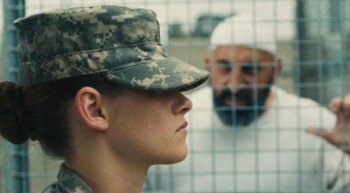 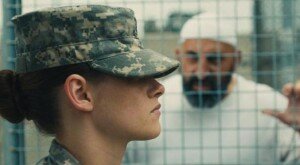 Once in a great while, I watch a movie that seems so well intentioned I just want to give it a high grade. Sure the movies may be a little underwhelming, don’t follow through on their premise, or are downright boring, but intentions play well into the end result of almost any movie, big or small, good or bad.

Camp X-Ray, the directorial debut of art department regular Peter Sattler, aims to tell an intense moral tale about the controversial detention center/prison, Guantanamo Bay. Though the setting is interesting enough, and the core dynamic established between an army private and one of the “detainees” is a thoughtful one, Camp X-Ray suffers deeply from not knowing which direction to truly go in.

The film casts past Twilight queen Kristen Stewart in the role of Pvt. Amy Cole, a freshly transferred soldier whose mission is to guard Camp X-Ray (a smaller section of Guantanamo, as I understand). Cole is a gruff female soldier whose determination and will to do good both motivates and blinds her to the world she’s signed herself to. We quickly see the world of Camp X-Ray, both the location and film, as a ticking clock of precision and eventual alarming. We meet some of Cole’s fellow guards/soldiers, including the tough but seemingly fair Col. Drummon and the brutish Cpl. Ransdell. Both end up filling the role of sexist military men who see female soldiers as inferior and or sex objects. While this may have worked in giving the film a more authentic feel, both characters feel so one dimensional that it’s hard to take them seriously.

The two soldiers are part of the much larger issue I had while watching Camp X-Ray, which was the apparent lack of knowing what it wants to be. The film is equal parts prison film, military film, a commentary on sexism in the military, a developing friendship story, and about five or six other mixed bag plot themes. It’s not that the film shouldn’t shoot to have a lot of themes, but choosing ones to focus on is essential, or else you get all of them competing for our attention. Sadly for Sattler, subtlety is not his strong suit, and the amount of blatant heavy handed tactics starts to wear you down by the end. For example, we are constantly subjected to things like the opening shot of September 11, reminding us why Guantanamo Bay exists in the first place. Throughout the film, a friendship develops between Amy Cole and inmate Ali Amir, who is portrayed by the wonderful Peyman Moaadi (A Separation). Truly, I don’t buy their friendship at the beginning. It would be difficult for me personally to connect with someone who flung feces at me on our first meeting. Maybe it’s because they are locked down in this place for such a long time together that you inevitably bond with those limited people around you.

Now these scenes between Ali and Cole are definitely the highlight of the film and, even if the friendship doesn’t make a ton of sense at the start, the conversations and the sheer acting behind both Stewart and Moaadi is inspired. I’ve never been a big fan of Stewart and her typical sullen facial expressions, but here they seem to work wonders for the stoic and almost boring Amy Cole. It’s not that she isn’t interesting as a person, but her lifestyle follows such a tick tock routine that the film gets you right in with her feeling of being trapped and mechanical. Moaadi is perfectly cast, though his character comes off as somewhat standard. Amir is insightful, but rambunctious, devoted but blind (like Cole), and ultimately just a human.

At the end of Camp X-Ray we get a well acted but melodramatic scene in which the two stars face off in a sort of life and death situation. I won’t spoil it, but it’s not hard to predict the outcome at all. This brings me back to the idea that the movie simply doesn’t come together despite all its well thought out plot points. I never quite picked up on what the director was trying to say. Maybe it’s that Guantanamo is an evil place that serves no real purpose but to act as a safe guard against suspected terrorists? Well, most of us already knew that. Is it a film about women’s role in the military and the hardships they face? Could be, but it doesn’t go deep enough into the true issues women in the military face everyday like The Invisible War. Maybe it’s about the power of friendship and how it can come in all shapes and sizes? Something we have seen before and better. In the final moments, it’s simply an okay film that shoots for the moon and only winds up breaking the atmosphere. Sattler has good directing instincts and the actors are performing well, but I just can’t bring myself to actually recommend this film to people. A DVD rental at best, I wouldn’t rush out to theaters and pay top dollar for it!