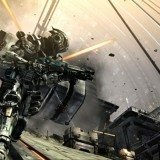 Something Vanquish Related Is Being Teased By Sega

Platinum Games’ third person shooter Vanquish is being teased again by Sega. Though it isn’t much, it does further hint at something related to the game, possibly a PC release.

The teaser this time comes from Sega’s Twitter account, which Tweeted out a picture of a mysterious emblem with the caption “2017”. This doesn’t look like much, but eagle eyed fans were quick to notice that the emblem was that of the Order of the Russian Star, which is a faction of the game. Sega recently hinted at a PC port of Vanquish with an update of the PC version Bayonetta last month, so it looks like once again another hint at the inevitable PC release.

Vanquish was originally released for the PlayStation 3 and the Xbox 360 back in 2010, and was met with praise from both critics and gamers alike for it’s high octane action and the over the top charm Platinum is known for. To finally get the game on the PC after so many years of fans begging and hoping would make many people happy, myself included.