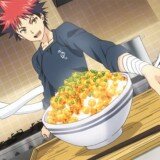 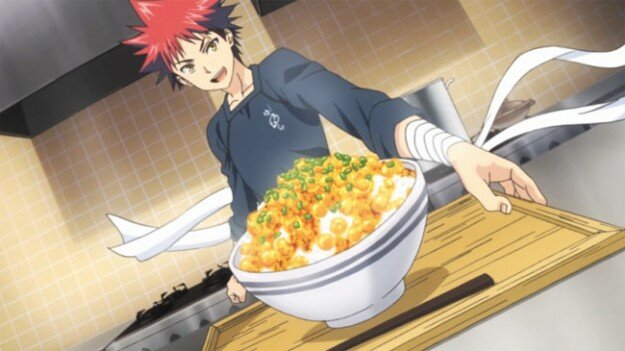 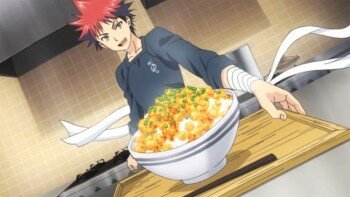 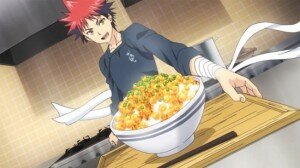 Yukihira Souma has a dream to become a full-time chef in his father’s restaurant and surpass his father’s culinary skill. However, just as Souma graduates from middle school, his father closes down the restaurant to cook in Europe. Although downtrodden, Souma regains his passion to become a chef once his father challenges him to survive an elite culinary school where only one percent of the students graduate. Souma must compete to overcome people’s assumptions due to his origins as a “diner brat” and become the number one student in the school.

Back in March, we reported that Shokugeki no Soma was the fifth most anticipated series of the Spring 2015 anime season. In fact, it was the only series in the Top Five that was not a second season or reboot. Based off the popular manga series by the same name, this shounen anime has the appeal of a battle-based story like Naruto but with cooking thrown into the mix. Souma must have a shokugeki, or cooking battle, with others in order to rise to the number one spot. Each character has their own unique quirks and cooking styles making them interesting opponents, from the meat specialist who nearly always wears an American flag bikini to the “God Tongue” of Soma’s biggest rival, Erina.

Now, the first anime review I ever did for All That’s Epic was back in February when I watched six or so episodes of the series Gourmet Girl Graffiti, which was still being released at the time. Though I had read food based manga before (shout out to Kitchen Princess), I was unfamiliar with anime taking the almost literal route of “food porn.” With every bite the characters took in Gourmet Girl Graffiti the characters would blush and sigh in near orgasmic pleasure at the taste of food. At the time I thought that was about as graphic as it could get.

And then I watched Shokugeki no Soma.

Four minutes into the first episode the audiences gets their first taste of the “food porn” this series works with. When one of Soma’s classmates tries his new “creation,” squid tentacle paired with peanut butter, she is mentally transported to a nightmare-like landscape. There a squid covered in peanut butter seizes her and begins tearing at her clothing. The audience is able to see her legs spread open and three, peanut butter drenched tentacles shoot in-between them. In the next scene the audience sees that the girl is merely being wrapped in the tentacles, as she claims that the taste of the food was like being “groped.” Still, the phallic implication of the tentacles is made clear.

Whenever characters taste food they are put into a dreamlike state, where either the experience is pleasurable or scarring. Delicious food will lead to naked bodies tickled with angel feathers, floating in a pool of meat juices, or being covered in honey. Disgusting tastes will lead to images of groping, bathing with gorillas, or being in a bathing suit while watching rhinos at a train crossing. Though a bit strange, it is a fairly decent way to convey taste through a visual medium.

If you can get past the strange and sexual visualizations of taste this anime provides a humorous, quirky storyline that is fairly enjoyable. With the intense atmosphere brought on by the battles you really end up rooting for Souma and wanting to see him succeed. Maybe this is because his strength of will is admirable, or we can relate to his struggle in some way. Either or this series makes for a great watch and I fully understand why it was one of the most anticipated series for the Spring 2015 anime season.

Did you enjoy this article? We’d love to hear your thoughts in the comments below. For the latest on all that’s epic in gaming, movies, television and cosplay, follow us on Twitter or like us on Facebook!
24
SHARES
FacebookTwitter
GoogleWhatsappPinterestDiggLinkedinRedditStumbleuponTumblrMail