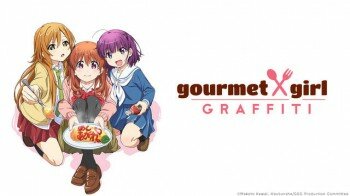 Third year middle school student Ryou Machiko has been living on her own since her grandmother passed away. Though she possesses a talent for cooking, her food has not lived up to her expectations once she began cooking just for herself. One day she gets word that her second cousin, Kirin Morino, is attending the same cram school as her and will stay at her house on the weekends. Once Kirin arrives, she is able to teach Ryou the key to great tasting food: eating with friends and family.

Shaft, the animation studio behind “Puella Magi Madoka Magica,” lends its unique style to “Gourmet Girl Graffiti” via their avant-garde cinematography. They take what could be a very simple anime and create beautiful visuals that keep the eye drawn to the screen. Along with Shaft’s famous anatomy-defying head-tilt, which is used liberally throughout each episode, their use of mixed animation styles lends a charm to the series. Though the changes in style are not as drastic and abstract as the Gekidan Inu Curry sequences in “Madoka Magica,” it certainly adds visual appeal. Shots where food is depicted take on a brighter glow, with high detail that brings a realistic quality to the food.

That level of realism is also lent to the characters depicted in these scenes, which is used to highlight one of the more unique qualities of this anime. To be perfectly honest, it took a great amount of self-control not to begin this article with, “Do you like sex? Do you like food? Do you like sex with food? Then this anime is the one for you!” The running gag throughout the series is that the main character, Ryou, eats food sexily. Her cheeks flush, eyes widen, and she throws her head back as she savors each bite. Food in some scenes seems quite phallic, especially when pieces are being forced into Ryou’s face by other characters.

Because of this over-the-top running gag the anime might be painful to watch for some, as it is nearly literal “food porn.” However, beyond whatever discomfort and awkwardness these scenes may cause you to feel, this anime has more to offer than a joke or two. “Gourmet Girl Graffiti” falls into the category of “slice of life,” meaning that it has a focus on mundane realism and everyday tasks. It takes care to savor moments and romanticizes everyday life, wrapping the viewer in a warm blanket of familiarity. Despite watching characters that have their own unique experiences, you begin to feel nostalgic about your own times eating food with friends and family.

Generally when people think “anime” they tend to think of something much flashier and more complex than “Gourmet Girl Graffiti.” Though it is simple it is not boring, and I felt a smile growing on my face every time I watched it. It is definitely something anime fans should put on their “Winter 2015 Anime” watch-lists.

“Gourmet Girl Graffiti” (Kofuku Graffiti) is a weekly anime series based off of the four-panel comic of the same name written and illustrated by Makoto Kawai. The anime began airing in Japan on January 9, 2015 and is being simulcast by the anime-viewing website Crunchyroll.

Anime Review: Saekano – How to Raise a Boring Girlfriend
All That's Retro