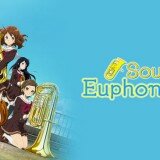 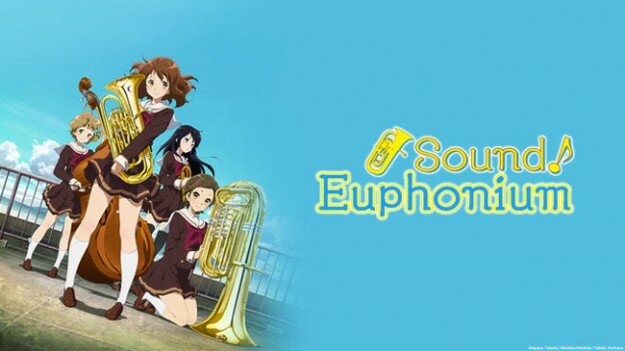 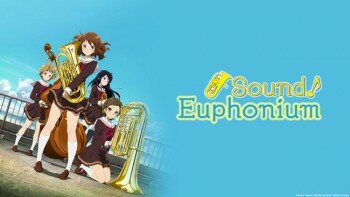 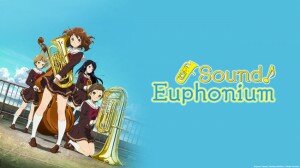 The Kitauji High School concert band has dreams of representing their prefecture in the national competition. However, the lack of resolve displayed by some club members has chased off the serious musicians and left the band in no place to even compete in the qualifying tournament. That is until a new adviser arrives, providing strict instruction to whip the band into shape. First-year student Kumiko Omae, who has been playing euphonium since elementary school, is drawn into the club. With old and new friends she works with the club towards their goal of competing in nationals.

Before I go into anything else about Sound! Euphonium I feel like I should emphasize the ridiculously high quality of its production. The episodes play like a movie, with perfectly directed writing, pacing, and choreography. There is a steady balance between humor and tension, giving great impact to even the smallest of moments. Unlike many other series that I have reviewed this anime does not rely on stock characters. Instead the audience is presented with individuals displaying unique personalities and intricate subtleties that add depth to their motivations. Kyoto Animation does a beautiful job with this series, providing detailed backgrounds that bring the backdrop of Uji, Kyoto to life. Simply everything about this series makes it such a pleasure to experience.

And now that my gushing is over with, I will go back to what is likely surprising people about this series: it focuses on concert band.

Now, were you ever in concert band? Because I sure was. My mother and father were determined that my sisters and I received a musical education, so it began with piano lessons in elementary school and led up to concert band in middle school. My eldest sister took a liking to the clarinet and eventually found herself in one of the best conservatories in the country to earn a degree in music business. The middle sister found herself on percussion while I took up the trombone, neither of us passionate enough to pursue music into higher education. Still, each one of us found ourselves playing in school concerts, marching in parades, and scaring our family dogs with the sounds you make when you are on the way to actually playing music. So obviously this series brings about a lot of nostalgia for me, and surely anyone else that has a history with music.

But you do not need to have a musical past, or any musical knowledge to enjoy this series. Since one of the primary characters is learning an instrument for the first time she and the viewers are guided through the different aspects of playing in the band. Each section and instrument is covered with emphasis on their larger role in the band. For example, the tuba’s music may seem simple of even dull when played alone, but in a piece it helps carry the rest of the ensemble. In addition to the music itself, the show delves deeply into the large amount of effort it takes to become talented at instruments. It is not simply about knowing the music, but knowing the ins and outs of technique that cover everything from breathing to proper instrument maintenance.

Personally, what I enjoy most about this anime is that it places emphasis on the level of resolve necessary to gain musical talent. I feel that sometimes the arts are looked down on as being “simple” or “easy,” not requiring much effort at all to accomplish simple tasks. Surely sports require far more effort and training, right? Yet these characters talk about how to become better musicians they have practiced until their lips ached, have calluses form over their fingertips, and exhaust themselves through breathing exercises. There is a scene where the instructor makes the band members run laps and then immediately play their instruments, building up their endurance and lung capacity so that they can play better while marching. A few times I laughed as background characters, members of sports clubs, comment on how “hardcore” the concert band in. Because if you have been in or around a serious music program then you certainly know how “hardcore” it can be, especially during marching season.

I would highly suggest everyone giving this series a chance, even if concert band holds no interest for you. There are so many powerful elements about this series in terms of writing and animation I feel like it will reach an audience much farther than music lovers.