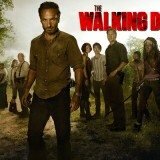 We hate it when our favorite characters die on AMC’s The Walking Dead. It’s inevitable, though, that one of the remaining good guys will die sooner or later. Just browse through the endless pile of comics for proof. Who will be chosen to go this season? The roster is extensive and the tables seem to have turned for one character.

If you didn’t notice the warning above, and don’t want to know who will die in the upcoming season, please stop reading now! If the anticipation will kill you between now and October, go forth and read.

One of the central characters rumored to be killed off this season has been with the show since the beginning. According to the rumor mill, this person has already wrapped filming for good. This person is none other than Steven Yeun, also known as Glenn! It has been said that Yeun’s scenes were completed towards the end of May, courtesy of the Spoiling Dead.

There’s always the chance that this is all a terrible mistake, right? While we wait for the other shoe to drop, let us know your favorite Glenn moments below.