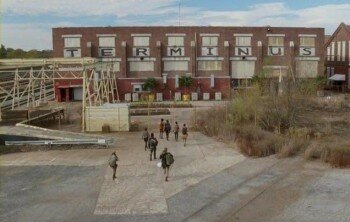 AMC’s The Walking Dead has shambled off to prepare for season 5, leaving us to our own devices for the next several months. Perhaps we will build that fort, stock on supplies or re-watch all the previous seasons and cry over those we’ve lost. Or, we can take a gander at what is to come for the upcoming season which will air this fall. In a recent interview with MTV, creator Robert Kirkman didn’t give us much to go on, but he did offer a few hints about what season 5 will bring.

Kirkman said, ”I just turned in the second episode script for season five, and all the writers are hard at work on their individual episodes. We’re pretty much halfway through the fifth season, script-wise. And we’ve already nailed down what our finale is, and what our overall arc of the season is. The back half of the season is taking shape very quickly, and we’ll have all the scripts written by the summer…It’s always interesting the way these things overlap. By the time people have seen the entirety of the season, we’re already pretty much done with the writing on the first half of the next season. We’re always quite a bit ahead. We’ll be rolling cameras in May, so I’m very excited about that.”

Negan Will Be Coming to “The Walking Dead” TV Series…Eventually

But what about the rumored spin-off that everyone has been talking about? Or this Negan guy who is said to be looming around, causing more craziness for those who just arrived to Terminus? ”As far as the spin-off goes, I’m actively working with [Showrunner] Dave Erickson on that, and we know when our proposed release date is — although I can’t tell you that, obviously. We’re working towards that show, and it’s gonna be awesome.” Kirman continued on about the new villain of the show, Negan. “As far as Negan casting goes, Scott (Gimple, showrunner) and I are always talking about who we would put in that, it’s definitely on our minds, and there are definitely a lot of candidates. But I wouldn’t expect Negan too terribly soon, although he is definitely in the plan. It’s a 99% lock that he’s going to be in the show eventually, so be on the lookout for that.”

Look for The Walking Dead to return Sundays this fall on AMC.