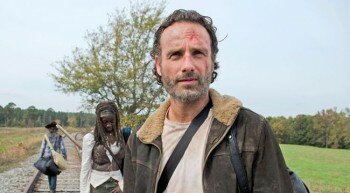 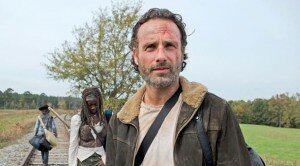 Terminus is really the last place anyone would want to be, but that’s where Rick and his group have ended up at the beginning of The Walking Dead Season 5. The teaser of Rick peering out of the train cart makes us wonder what the next season of AMC’s hit series will bring. We have heard teasers and spoilers on who may die, as well as talk from Robert Kirkman himself. Don’t worry, though. We won’t spoil any deaths for you here, at least not today!

To fill the void between now and October, AMC has released two behind-the-scenes set videos from season 5. The first video documents the first day back on set with both cast and crew. The second video shows the crew working with props, with a behind-the-scenes look at zombie kills and explosions.

Each season of TWD has proven to be better than the previous, and it’s cool to get a look at the hard work and dedication that goes into making this bloody, action-packed, walker-filled drama. It is so neat watching how they use special weaponry, green screen and a little TV magic to make a kill look bad ass.

Check out the behind-the-scenes videos from The Walking Dead below.

The Walking Dead Season 5 Poster: Hunt or be Hunted

I've got to hand it to The Strain. The comic[more]

Are these moments of base fan service really worth slogging[more]

The Strain continues sitting on the verge of good show[more]