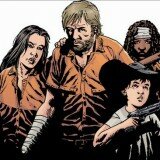 Over the years, The Walking Dead has become a major franchise that fans have surely become addicted to. Whether it’s the drama-filled TV show, Telltale Games’ enthralling video game series, or the comic books that started it all, once you come in contact with The Walking Dead, you become just like those zombies thirsting for brains, craving more and more. The Walking Dead has proven itself to be a standing title that isn’t going anywhere any time soon. Although the TV series started just a few years ago and with video games releasing last year, The Walking Dead comic books have been around for 10 years now. In honor of such, a panel was held at the New York Comic Con today, celebrating the 10th anniversary of The Walking Dead.

Robert Kirkman, writer for The Walking Dead comic series, stated that along with the NYCC panel, they will surely be celebrating this milestone in ways of their comics at well: We have a new storyline called ‘All Out War’ running through issue 120. We sold out of issue #115, the story’s start, with over 350,000 copies. That’s our highest selling single issue yet.” Because of the high demand on issue number 115, they will be releasing a new edition of the popular comic, which will include a new cover. The Walking Dead’s first ever comic will also receive a new cover in honor of the 10th anniversary. During the panel, covers for issues 116-120 were also showcased to an eagerly-anticipating audience.

As the panel opened up to receive questions from the audience, one fan asked, “Have you ever toyed around with flash forwards, like Carl as an adult?” To this, Kirkman responded, “Assuming Carl doesn’t die soon, I’d rather keep the book going til he’s grown up.”

And of course, the fan favorite from the TV series, Daryl Dixon, was brought up as a fan asked, “When will we see the Dixons in the comics?” And unfortunately for us Daryl lovers, Kirkman responded with, “Never. I like for people to be able to get different things in different versions of The Walking Dead. You never know what’s gonna happen to Daryl in the show. He may die.”

Although we have all grown to love Rick Grimes, the idea of his death may be something that we will have to come to grips with in the future, and as a fan asked if there would be anyone in the group who would be able to take Rick’s place in the event of his unfortunate demise, Kirkman responded, “I think we’ll see some interesting things from Maggie soon, and I think Andrea could handle it in the event of Rick’s untimely death. Not saying anything is gonna happen, but it probably will.”

Is Glenn Still Alive on “The Walking Dead”?

‘The Walking Dead’ Season 6 Trailer: You Don’t Have a Choice