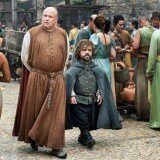 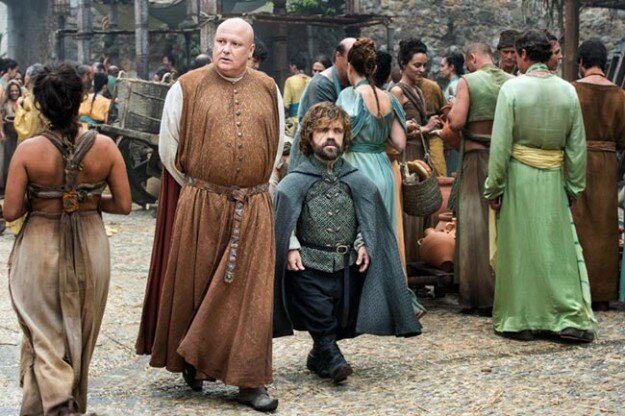 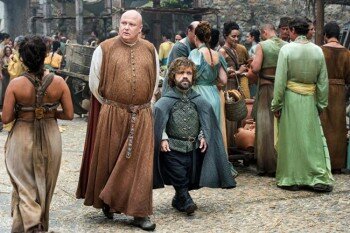 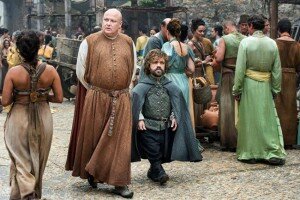 WHEN YOU SPOIL THE GAME OF THRONES YOU DIE!!!

Perhaps not the all-around penultimate climax we expected, but it’s good we still have plenty of excitement to get hyped for in episodes 9 and 10.

The Hound wastes no time going to town on some Brotherhood lackeys. The two older thugs are taking the piss out of these two youngers when the Hound comes at them ax swinging. When you’re being slaughtered by the Hound, there isn’t a lot of room to die gracefully.

Leave it to Game of Thrones to be so gleefully macabre about a bunch of vigilantes hanging those who betrayed their ideals. At least Beric Dondarrion and Thoros of Myr seem to have relaxed in their absolute moral stances. They let the Hound hang two of the three traitors as payback for killing his friend Septon Ray. In addition to some hilarious banter, the Hound takes a boot right off one of the men as they swing.

The Hound wants less than nothing to do with the Brotherhood after that, since they did try to execute him the last time they crossed paths. There is some part of the Hound that wants to do good, instead of wandering the world killing to survive. Does the Brotherhood have its eye set on the North? Or the White Walkers? Do they have any plan to stop them?

Maybe this was the summons to her trial by the Faith, we’ll never know. Cersei is trying to flex whatever agency she can now. Tommen may have let the faith militant into the Red Keep but she’s certainly not ever going back to the Sept of Baelor and into the Sparrow’s custody. The sparrows are brave, no doubt about that. But the Mountain is even stronger and more brutal than he was before, ripping off one of their heads as they choke on the ground. Look at Lancel tremble.

Not long ago Cersei would have bent every head in respect by her approach. Now the whole throne room assembly awkwardly shuffles around her, talking behind their hands about the gaunt brute at her shoulder. Kevan bars her from climbing the steps to sit by her son’s side as he prepares to make royal decree.

Life Lessons From the Ladies of Game of Thrones

This obviously an idea planted by the High Sparrow. You can see how distraught Tommen is. Without a trial by combat Cersei has no way she can legally escape the Faith’s “justice”. Why is the Faith holding Loras’s and Cersei’s trial together? What is their goal in that arrangement? It is rough to see Tommen pitted against his mother. But it’s clear that the High Sparrow has learned to influence Tommen better than any of the parental figures from his own family. Cersei keeps defending herself in violent upsetting ways. Wonder what Margaery thinks of all this.

I guess we’ll have to wait and see what this rumor is all about. Hard to imagine what could possibly give Cersei an edge now. Perhaps it’s something incriminating about the Tyrells.

When Brienne and Podrick ride upon Riverrun, the castle looks properly under siege. Been a while since Brienne and Jaime were working together. Quite a lot has changed since then.

But Podrick and Bronn are style absolutely hysterical. I thought that choking preview was going to be more fun than dangerous. Podrick has grown since Bronn last saw him, but Bronn is still the scoundrel.

Jaime is proud that Brienne actually found Sansa Stark and made her safe, but now they each have their own opposed battles to fight. Jaime is trying to put down the Tully rebels, Brienne is trying to rally them to fight for Sansa. Jaime can’t compromise his house, but he does agree to let Brienne sneak into Riverrun to try and persuade the Blackfish to surrender. Brienne gets Jaime’s word that he’ll let the Tully forces march North if they abandon the Castle to the Freys.

Brienne makes a gesture of friendship in returning Oathkeeper, the Valyrian Steel sword that he gifted her. But it’s Brienne sword now. Brienne says that if the Tully’s and the Lannisters come to blows, she’ll have to fight Jaime to defend Sansa’s kin. Jaime hopes it doesn’t come to that.

The Blackfish might just be even more stubborn than Brienne. He doesn’t care who Brienne is, or that she says she’s in Lady Sansa’s service by Jaime’s leave. He can’t help her retake Winterfell. Brienne tells Podrick to send a raven North, informing Sansa of her failure. Sigh.

What really do Edmure and Jaime have to say to each other? Not much in Edmure’s mind. He’s got a son he’s never met by his wife who he hasn’t seen since his wedding night. Edmure’s got nothing but bile for Jaime, he doesn’t understand why Jaime’s talking about family or the strange admiration he had to Catelyn Stark and her fierce love for her children. But Jaime gets there eventually. His love for Cersei is just as fierce. If has to catapult Edmure’s infant son into Riverrun and kill every last Tully who ever live to get back to her, that’s what he’ll do.

We next see Edmure approaching the gates of Riverrun alone and unbound. The Blackfish knows what’s happening. Jaime has sufficiently threatened Edmure to convince him to surrender if he returns to the castle. The rest of the Tully men are prepared to obey Edmure and be spared if they surrender. If Jaime mistreats them I’m going to be so pissed. I guess they won’t be riding North either.

Brienne offers the Blackfish a last chance to come with them back to Sansa’s aide, but he’s resigned to die fighting for his home. Off screen. Really? He couldn’t have made that big a fool of himself! Jaime gives a resigned wave as he spots Brienne and Podrick rowing away from Riverrun.

Meereen is bustling in the streets again now that the Sons of the Harpy seem to have disbanded. There’s trade and laughter in the market, the Unsullied patrol the streets without being harassed and the citizens are gathered around the heralds of R’hllor, glorifying Daenerys.

Varys is still skeptical that recruiting the Red Priestesses won’t turn out to be a folly, but he’s got another mission on his plate. He’s returning to Westeros to build up support for Daenerys and her much anticipated return. Tyrion is sorry to see his best conversational friend and ally leave again.

At least he’s got Missandei and Grey Worm! Tyrion finally convinces the two to share a drink with him and swap jokes. A toast to Queen Daenerys gets them to sip. Haha, yes we get it, the Northerners are the barbarians of Westeros. Missandei is getting a bit closer to humor, but Greyworm turns out to have the best punch line.

“That is the worst joke I’ve ever heard.”

It’s so good to see Missandei laugh and Greyworm smile!

But there’s nothing like a whole fleet of ships from the Slaver cities to crash a party. I guess if they can’t bring Meereen down from the inside they’ll just conquer it!

Grey Worm takes charge in the military scenario. Unexpected rattling on the ceiling of the Great Pyramid put all the Unsullied on alert. But it’s all good, it’s just Daenerys returning to her city in its desperate hour on the back of her FIREBREATHING DRAGON! Maybe some of the ships can be saved for her fleet.

So Lady Crane followed Arya’s advice about her monologue following Joffrey’s death? The crowd seems to lap it up! She takes her break back stage. As she prepares to enjoy her (poison free) rum she hears a rustling in the costume racks. The girl who pushed the poisoned rum out of her hand is laying against the wall, bleeding from the gut.

Suturing is fine skill. Good to see Lady Crane using it to heal Arya instead of patching up wounds on unfaithful men that she inflected herself. She invites Arya to come with the company to Pentos, but she says that they wouldn’t be safe. Even the traveling actors know how dangerous the faceless men can be. With milk of the poppy and with the only maternal figure Arya’s known for years, this is probably the best sleep Arya can remember.

Really? That seriously just looks like the Waif with a beard and mustache. Arya wakes to find Lady Crane had taken a fatal drop off a stool. Assassin’s Creed style chase through Braavos? Called it! The Waif gives chase through windows, bath houses, markets and vaulting over carts. In one desperate getaway, Arya leaps to a lower street level to a fruit stairway, but goes for a rolling crash through most of the produce, reopening her wound in the process.

The Waif stalks her prey down alleys to a dark candlelit room, looks like the room where Arya bunked after retrieving Needle. The Waif closes the door behind her. Arya rises to her feet with Needle in her hand.

“Haven’t we been through this already?” The Waif chides, “That won’t help you.”

When I first saw Arya assume her stance and snuff the candle with Needle, I flipped. I had no idea what it would mean for the presumed fight. But then I remembered Arya fighting the Waif while blind. Arya actually got good enough to fight the Waif to a standstill while blind. The Waif never head to learn to fight in pitch black so Arya had the advantage. Sure enough when Jaqen follows a trail of blood to the hall of faces he discovers the Waif’s freshly cut face added to the hall.

Not much of a confrontation between Jaqen and Arya. Despite reclaiming her sword, her identity and her origins, Jaqen seems pleased with Arya’s accomplishments. Perhaps some part of him remembers that Arya first wanted to learn Jaqen’s ways so that she could help her family again. Perhaps he was rooting for her to take their gifts for herself after all. She’ll have to bribe somebody else to get back to Westeros now.

The Battle of the Bastards is up next Game of Thrones Fans! Here’s to an episode of bloody, story advancing, justice!