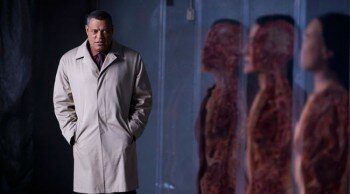 Rest in peace Special Agent Beverly Katz, you will be missed, but in your death we got quite possibly my favorite death display in Hannibal’s run. I’m not going to try to describe it, except by saying it’s like a human slideshow. As last week hinted, Hannibal got the better of Beverly, just as she was making the big discovery. Of course, we knew Beverly wouldn’t be able to survive and ruin Hannibal’s secret, which is one thing that always hinders a show like this until they go into “catch the real killer” mode. Until the writers want Hannibal outed to everyone, certain inevitabilities are in place. This is one example, anyone who finds out Hannibal’s secret will likely die. Another one comes up later in the episode, but I’ll get to that in a moment.

“Mukozuke” obviously picks up pretty close to where last week left off. Lounds ends up being the one to find Katz’ body, I assume via a tip, and once Crawford arrives the true emotional weight hits. One of the team has been taken out, and they now know someone else is out there stalking in Will’s place. In fact, we find out during tonight’s episode that Will does indeed have a certain admirer, who agrees to help Will put his “diabolical” plan into action. Will has only one mission for his new friend, “kill Hannibal Lecter”.

This is where the second inevitability of the episode comes in. We know for a fact that Hannibal isn’t going to be killed off this episode. If he was, that would be the craziest twist in the past decade, but it would make little sense. Hannibal isn’t likely going to be caught or killed until much later in the series. That being acknowledged, it was an awesome turn of events getting to see Hannibal incredibly vulnerable. I won’t get into the rampant symbolism of that entire scene because it could definitely be dissected in a page or two, but getting to see Hannibal, feeling close to the way all his victims have, was a pretty damn sweet treat.

As everyone scrambles to catch Will’s copycat Hannibal, the show finds itself getting into a cleaner and more brutal rhythm. I can now fully understand why this show turns off many viewers. It’s explicit to no end for an NBC show. On the other hand, I wish more people would become aware of its staggering presence so it can keep the steam rolling. At this point, the critical reviews are as strong as ever but the ratings seem to be maintaining a similar record to last season. Fortunately if the show is cancelled, it’s very likely another outlet will pick it up. In plenty of circles Hannibal is known as grade A television. I just wish that circle would expand some more!