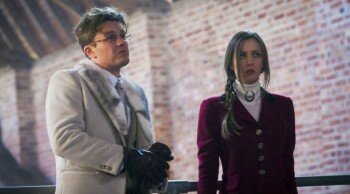 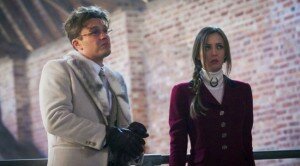 Picking up a little before the end of last week’s episode, “Naka Choko” begins with Randall Tier (the animal man), leaping through Graham’s window in the form of the black antlered man from Will’s dreams. It was exciting getting to see the actual battle that was held back from last week’s episode. The score has been evened now, as both Lecter and Graham have sent people to kill one another. The love-hate relationship between the two men is becoming obviously crooked to outside viewers, as certain parties make mention of the oddness of it all.

I’ll admit, at first I thought it was somewhat strange that Graham wanted to continue his sessions with Lecter, but as Will will tell you, “if you can’t beat him, join him”. Graham is getting himself as close as he can, as evidenced by the final dinner scene which was delectably sinister. I won’t spoil what happens but a certain major character bit the dust this week, though not in the way you might expect.

Now that we are getting towards the end of this season, the overarching story is beginning to take greater shape. We are finally introduced to Margot’s psychotic pig breeding brother Mason Verger (Michael Pitt), who will undeniably play a role in the outcome of this season. The scene in which Verger explains how he taught his pigs to eat humans alive was 100% creepy. Pitt was one of my favorite actors on Boardwalk Empire and I didn’t even recognize him when he first walked onto the screen, but he has been cast in a much darker role than normal and I can’t wait to see what Mason ends up doing when faced with the truly crazy nature of Lecter and Graham.

Margot and Graham had some interesting down time this week as they talked and began confiding in each other in new, unexplored ways. The sex scene in this episode was strange, to say the least. Then again, almost everything that happens on Hannibal is strange in some capacity. It is, after all, a show about the psychotic and crazed, the damned and the deplorable. There are few, if any, heroes left on Hannibal and even those we root for don’t have clean hands anymore.

The final scene, which I won’t fully disclose here, is masterfully sustained. The conversation, the food, the cinematography, everything worked to build up a nasty conclusion to one of the season’s most carefully executed episodes. Though much that was presented this week felt like pieces being put into place for the last three episodes, season 2 has had barely any mishaps to speak of. Hannibal continues to be one of the best series on TV and I am hoping once again that the show gets renewed for a third season. We all know it deserves it!