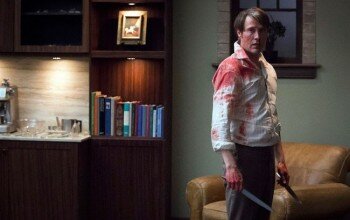 I wish there was an onomatopoeia for “slow clap”. That would be the perfect way for me to describe “Mizumono” in a single word. Unfortunately, there is none so I am left to attempt to explain why the Hannibal season finale was so…perfect. That’s not a word I tend to use very often, but this entire season of Hannibal didn’t miss a beat as far as I’m concerned, and after the penultimate episode last week being outrageously good, I had high expectations for the finale. Suffice to say, I couldn’t be happier with the way season 2 ended, and with season 3 locked down, I don’t feel that crushing apprehension that we will never see the likes of Will, or Crawford or Freddie, or Lecter again.

I don’t like to spoil things, but this is one episode that will require some heavy spoilers to breakdown. If you haven’t watched the episode yet, do not read on!

The episode starts off with Will Graham engaged in two conversations, one with Dr. Lecter, and one with Agent Crawford. During these talks, Graham reflects on the events that brought them here, and the relationships he had with either men. To a point, I wasn’t too sure if Graham was actually playing Lecter or Crawford, or both. I’m beginning to think it’s the last one. As everyone scrambles to get ahead of the game, Lecter, Graham, and Crawford continue their deadly tricks. The biggest of these of course being, Abigail Hobbes!

Even though I had always wondered about her specific fate, in the back of my mind I had kept the possibility that she was still alive, hidden, tortured or otherwise, and I was surprised and happy to see her return, even if it was only for a brief moment. As the inevitable final battle builds up, Lecter and Graham have one final meal together, where Lecter begins to question Graham’s newfound loyalty. Of course, Lecter is always one step ahead of the game, and the shots of him discovering that Will had been speaking to Freddie Lounds was a thing of absolute beauty. In fact, this whole episode had some of my favorite shots, including one of a drowning Alana Bloom, and another of Hannibal in the last shot of the episode.

Everything in this episode was working towards a singular goal. The reveal of Lecter’s true menace, and the confrontation we saw teased back in episode one between Lecter and Crawford. In fact, that final twenty minutes or so, I was clenched fisted, lip bitten and on the very edge of my seat. It’s rare for a movie to do this for me nowadays, much less a television show, but that’s just the kind of special power Hannibal possesses over me. As soon as Crawford left to begin his quest of good, I knew things were going to end in a gruesome and depressing fashion. Even though nothing is specifically set in stone (I don’t think they had an actual death shot), the carnage and the air of mystery left behind by Hannibal Lecter is purely insane. Alana Bloom is left for dead from a window fall; Jack is of course bleeding out in the pantry; and Abigail and Graham fight to hold on from back to back stabbing/slashing. That last reveal of Lecter leaving with Dr. Du Maurier was straight ahead haunting, and an amazing way to leave us wondering about her role in all of this. Where are we going from here? Will the hunt for Hannibal go global? Who actually survived Lecter’s rampage? All of these are questions that will be gnawing at me from now until Season 3′s premiere.

I don’t think I need to say much more. I love Hannibal, it gives me hope that, even with some of my favorite shows over, and some about to end, television still has some great stories to tell, and characters to explore. If you aren’t recommending Hannibal to your friends, please start now! Help us keep this amazing program on the air and kicking! Season 3 will surely be out next year. My countdown has already begun.