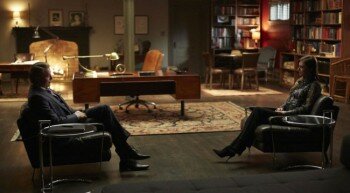 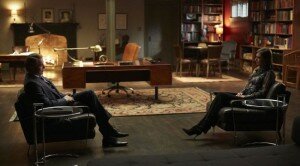 If I have one major complaint about Hannibal, or just police-centric shows in general,  it’s the habit to catch a new serial killer or bad guy week after week after week. For Hannibal, this ends up being a double-edged sword. I would like for more of the killers to last longer than a single episode. At the same time, I love seeing all the crazy murders Hannibal is able to cook up episode after episode. The killer in “Shiizakana” easily goes down as one of my favorites in the shows run so far. Earlier in the day, I watched two horror films that ended up being somewhat lackluster. I’d say “Shiizakana” ranks higher than both those films in scares and excitement.

Graham and Lecter investigate what looks to be an animal attack on several random people in the city. Through a few exceedingly violent scenes, we get to see a crazy bone creature animal thing maul its way through unsuspecting townsfolk. As always with Hannibal, things aren’t always as they appear and Lecter is led to an old patient of his to help “solve” the crimes. The final scene and words of this episode were some of my favorites this season, as we get into the inevitable endgame.

With only four episodes left, I am still curious to see what will come of Katherine Isabelle’s character. As she gets deeper into her therapy with Dr. Lecter, she becomes intensely aware of just the sort of doctor he is. In a great little scene, she ends up asking Graham how he would describe Lecter’s methods. Of course, we all know about his methods, but she’s only gotten a small taste of the insanity to come. Dr. Chilton has taken the fall for the Chesapeake Ripper, and the heat has come off of Lecter a bit. I can only imagine that the last few episodes have something intense up their sleeve.

As more people are coming around to the Hannibal the Cannibal theory on the show, Lecter is going to have to be even more cautious than he is. The end of “Shiizakana” was a ballsy move for him, and Will no longer has any delusions about the dangerous game of cat and mouse he’s entered into. The real question I keep asking myself is, who is the cat? And who is the mouse? Both men have come to even playing fields, and from here on out, it’s all out war. Next week’s episode is going to be another winner if the previews are any indication. Even though we are still waiting on renewal news, this season is so good it makes little difference.