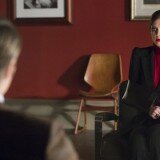 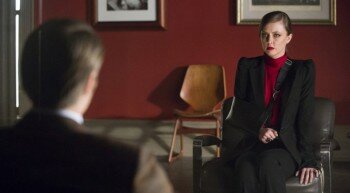 We got a lot of new faces in this week’s Hannibal. For a show that has been centered on a core group of actors, anytime someone new comes in they are instantly recognizable. Who is this new person? What dark secrets do they hold? How will they effect Graham or Dr. Lecter? These are the questions always present when a new character is introduced. This week included a new client to Dr. Lecter in Margot Verger (Kartharine Isabelle), a woman who is supposedly being abused by her psychotic brother, Mason. It will be fun seeing Dr. Lecter get a new play thing, and now that he has one of his old toys back, he’s probably as happy as could be.

Seeing Graham continue his therapy with Dr. Lecter may seem somewhat, forgive this, “crazy”, but then again, we are dealing with a show consisting entirely of characters who are crazy in one way or another. Graham seems to believe in the philosophy of keeping his friends close, and his enemies closer. Since the sessions between Graham and Lecter were some of the finest scenes from season one, I know many people will be happy to see the two battle words and minds again.

A new murder takes place, involving a woman being “reborn”, in a very twisted way. This leads the team to two men, Peter Bernardone (Jeremy Davies), and his social worker Clark Ingram (Chris Diamantopoulos). One of these two men is the killer but I won’t spoil who since the last ten minutes of “Su-zakana” are some of the most intense in in recent memory.

“Su-zakana” may not have been the grand episode that we got last week, where every piece seemed to fall perfectly into place, constructing a twisted tapestry of Hannibal’s whole philosophy. This is Hannibal doing what it does best, bobbing and weaving between psychological profiling and murder investigation. What makes Hannibal so special for those of us who watch it, though, is the dark, sinister atmosphere the show has been able to cultivate. Mikkelsen and Dancy continue to have one of the most elegant and relentless battles in television history, as each seems hell bent on destroying the other in his or her own way.

We have 5 episodes left in this season and still no word about renewal but honestly I’m not as worried as I was last season. Even if the show does get cancelled, it’s being heavily rumored multiple outlets are going to take the bait and try to net Hannibal. Of course, nothing is for sure yet. The show certainly hasn’t lost viewership and is averaging about the same as it did last season. Some clarity about the show’s future would be nice, but the show has plenty of time to get renewal.

Either way, in my mind, Hannibal hasn’t diminished at all, and in more ways than one has actually improved certain areas. Most notably, its overarching storytelling, which has been on point episode after episode. “Su-zakana” definitely felt like more of a setting of the guard than changing of it. With no breaks for the next five weeks, I think every episode is going to bring something raw and memorable from here on out.