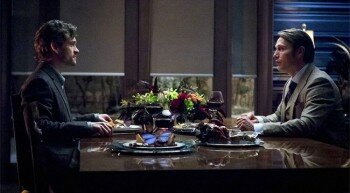 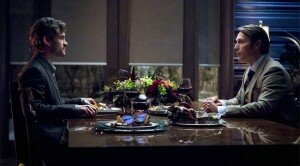 It’s sort of funny, in a strange way, that this is the second time on television in the past couple months I have heard characters talking about the Ortolan. The Ortolan is a small, endangered bird that has a brutal, inhumane method of being cooked and consumed. It’s a fitting topic for a show like Hannibal, and feels much more in place than the other show I saw it on, Brooklyn Nine Nine. Even though the idea of it disgusts me and I have no desire to try it, the relation that is conjured by Hannibal during this episode is impeccable. At this point in time, I have no idea whose in control of the situation, and even less of an idea where this season will end, aside from the flash forward way back at the start of the season. Things are ramping up towards the finale, and with the glorious news of a third season, everything should fall into place just as Bryan Fuller & Company have intended.

This week’s story started off a bit strange (even for Hannibal), as we find out that Margot is pregnant with none other than Will Graham’s child. Yes, I did find this more strange than the burning, wheelchair bound Freddie Lounds from the opening. As the murder team sets to investigating this mysterious death, Mason, Lecter and Graham set to work on a deadly game of rock-paper-scissors where each man seems to hold both a strength and weakness to the other players. Even though nothing truly monumental happened in terms of deaths, someone is going to die soon, and I think I know who it is. On the other hand, Hannibal has made a habit of keeping me guessing to the very end. This episode, with its beautiful final twist, gives me hope that the last two episodes will pull out all the stops.

Even though the majority of the major arcs didn’t move a massive amount forward, “Ko No Mono” was all about the characters’ interactions. We understand what Margot is after now; She wants to birth an heir to continue the family’s lineage and to get rid of Mason. Mason, who is being play maniacally by Michael Pitt, is still something of a wild card. We know he’s crazy, and it almost appears to be in that Joker sensibility of “watching the world burn.” I can’t help but wonder what the Verger siblings parents must have been like to raise such incredibly dysfunctional children. From the stories Mason tells, I’m guessing their father was not a treat to be around.

The other character who seems to be going crazy rather than acting crazy is Alana Bloom. She has been the one piece this season that hasn’t quite been fitting in with the rest of the pictures as she seems to be on a sort of standby, outside looking in state of mind. She is questioning what she believes and who she trusts and, at this point if I were her, I wouldn’t trust anyone. Especially all these nut jobs.

Hannibal Season 2 has been hitting a near perfect stride during its entire run. Not a single episode has been weak and nothing major has hit the show to knock it down from the high spot it’s attained. NBC had the good sense to renew the show for a 3rd season despite the same minor ratings from last year. From what I’ve read the show doesn’t cost a whole lot to produce, which is kind of insane considering the level of production value. If the show continues to offer up episode after episode of unbridled brilliance in its future seasons I will have no issue counting it amongst the best television has to offer. Recommend Hannibal to your friends! It needs all the support it can get!