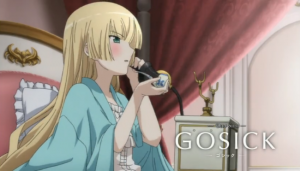 Enjoy a good creepy occult style story, or a mystery that’s begging to be solved then please join us at St. Marguerite Academy which is well known for being a school filled with superstition and urban legends. When the new student Kazuya Kujo shows up with his black hair and dark brown eyes he is bestowed the name of the black reaper by the other students. You can imagine how the son of a Japanese Imperial Soldier whose studying abroad must feel in this lonely friendless situation. Don’t feel bad, because soon enough he has more attention than he can handle.

Here mysteries and crimes are a part of daily life and solving them always takes the extraordinary skill of an adorable doll-like girl named Victorique de Blois; but be warned, this pint-sized cutie packs a big attitude. Let’s just say Kujo is sent running like a scared rabbit after their first accidental meeting. Victorique is also a student at the Academy but never attends class and spends all her time reading and being bored atop the school’s massive library. Kujo finds her to be an extremely fascinating and intelligent girl and will even go as far as dancing for her just to learn more about her.

Kujo discovers right away how unique Victorique truly is when witnessing her using her “wellspring of wisdom”, as she calls it, to solve even the most impossible crimes. Never fear, she never gets credit for this because her half brother Grévil de Blois is always taking it. He is a famous detective, with an even more famous hair-do whose secret to solving crimes is using his little half sister to do it for him, in a hilarious round about way of course. Kujo is not happy with this situation yet eventually and reluctantly accepts it for what it is, but never without protest. It doesn’t take long for Kujo and Victorique to form a strong bond, a bond that is strengthened or manipulated by sweets, Victorique’s one weakness. One gruesome crime after another occurs around them, and at some points Kujo begins to fear that he may actually be a reaper.

Yet there is one mystery that has yet to be solved and even the wellspring of wisdom that Victorique possesses can’t figure it out. Throughout the series we find out small snippets and tiny hints that lead to the biggest mystery of all, so has anyone ever heard of the gray wolf? If the answer is no then by all means have a seat and enjoy this epic anime. Be whisked away on a gruesome, puzzle solving, hilarious, on the brink of war adventure and let’s add a dash of love for good measure. You won’t regret making time for this series– trust me, Victorique’s laugh alone will be worth it!