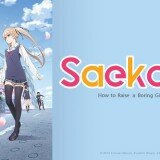 Anime Review: Saekano – How to Raise a Boring Girlfriend

Male otaku blogger Tomoya Aki, who works part-time to earn money to feed his anime addiction, meets a beautiful girl one day during spring vacation. The fateful meeting reminds him of a dating simulation game, igniting a passionate drive to recreate the moment in his own game. Lacking any discernible talent, Tomoya recruits Eriri Spencer Sawamura, his childhood friend and popular artist of 18+ doujinshi, to draw art for the game. Needing a game scenario writer, the passionate otaku is able to convince Utaha Kasumigoaka, a popular light novelist, to join their creation team. The final piece of the puzzle is the main heroine, Megumi, who is the girl Tomoya met on that fateful spring day. Together the group works toward making a dating simulation to sell at the next Comiket, the world’s largest doujinshi fair.

I feel the defining thing that will either attract people to, or push them away from, Saekano -How to Raise a Boring Girlfriend- is its nature as a harem anime aimed at males. This show revolves around a database of female characters, such as the childhood friend tsundere and moe kouhai, flocking towards a single male as they all vie for his affections. Sometimes this can be painful to watch, especially when there is gratuitous fan service, but the intriguing story can have you forgive these elements. Each character, though based heavily on tropes, has a depth of character to them introduced with their different otaku interests.

Aside from the qualification as a harem anime, Saekano is a comedy and romance. The romantic plot lines are well conceived, based in the shared pasts of Tomoya and his gaming “inner circle.” Comedic elements come from Tomoya’s overt otaku-ness, passionately preaching about the different qualities of moe in public or praising 2D girls over 3D ones. Each genre blends nicely into the story, making it funny, intriguing, and heartfelt.

A-1 Productions, known for anime like Black Butler and Sword Art Online, lends their beautiful animation style and luscious backgrounds to this work. Each episode has a fresh look to it, with a heavy mixture of pastels commanding most scenes. Occasionally, to draw emphasis to a comedic or romantic moment, the black outlines will be replaced with soft pastels like blue, green, or purple.

If you have any hesitations about the harem aspect of this anime but are still interested, I suggest that you skip over Episode 0, which is simply an introduction to the series unconnected to Episode 1. Though the episode makes fun of itself with commentary about how you have to give harem anime a chance, it still spreads the harem aspect on thickly by showing girls fighting one another to get Tomoya’s attention.

Had I not been trapped inside by several feet of snow and a negative thirty-degree wind chill, I might not have watched past episode zero. But I am certainly happy that I did, and now I look forward to the new episodes every week.

Saekano -How to Raise a Boring Girlfriend- (Saenai Hiroin no Sodatekata) is a weekly anime series based of the light novel series written by Fumiaki Maruto with illustrations by Kurehito Misaki. Episodes began airing in Japan January 8, 2015, and is being simulcast via the anime-viewing website Crunchyroll. The original light novels also received a manga adaptation, as well as two spin-off manga adaptations.