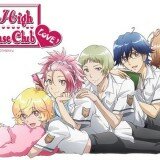 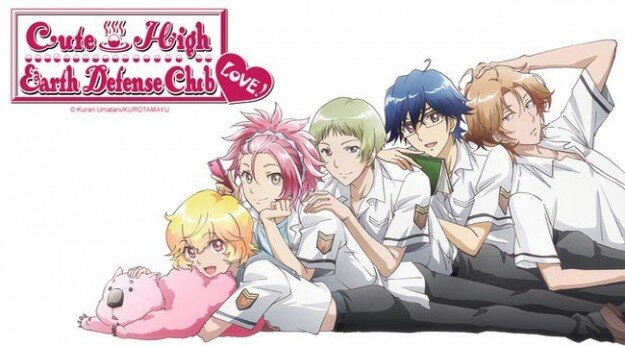 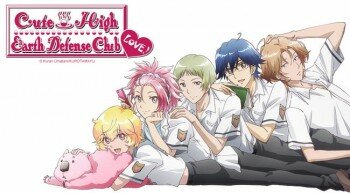 One day, the Earth Defense Club at Binan High School (Yumoto Hakone, En Yufuin, Astsushi Kinugawa, Io Naruko, and Ryuu Zaou) are approached by an pink alien creature, which looks strangely like a wombat, and are involuntarily charged with the task of protecting the earth. Using a set of “Loveracelets” given to them by the wombat, they are able transform into Battle Lovers. Using nature-based attacks, they utilize the power of love to fight strange monsters intent on spreading hate and discord. Their ultimate enemy is the Earth Conquest Club, who gain their powers from another alien creature, which resembles a green hedgehog, and create the monsters the Battle Lovers fight.

I am going to be one hundred percent honest with you all… I love this anime. Seriously. I love the outfits and the characters’ reactions to them, the running gag that the wombat is controlling the corpse of a teacher, and even the ridiculous monsters that almost always have something to do with a seemingly unrelated conversation earlier in the episode. There is a charm to it that I can only liken to the manga-turned-anime series Ouran High School Host Club due to how it treats the balance between comedy and plot. It is the type of show that takes itself just seriously enough to have the audience become emotionally invested in the events, but not so seriously that it cannot make fun of its own ridiculousness. And that is a balance I have always appreciated, because with it an anime can change its tone at will without betraying itself.

At its core Cute High Earth Defense Club LOVE! is a show about love, not necessarily romantic love but the love that bonds friends. The monsters are generally misunderstood individuals who feel isolated and that they do not have a place in the world. When you dress that concept up with magical boys who run around in matching costumes, which everyone mistakes for cosplay, beating up ridiculously themed monsters, that deeper meaning becomes hidden. But then there are those occasional, heart-felt moments that no matter how ridiculous show a glimpse of a larger picture.

Of course, an all-out ridiculous show is not for everyone, especially when some episodes can be laden with cultural references that can make the storyline confusing for anyone outside of Japan. The first episode plays heavily on jokes surrounding chikuwabu, and a chikuwabu monster eventually shows up. Now, you might be asking, what is chikuwabu? Well, it is a wheat-based food that is commonly used as an ingredient in oden. This is something my friend and I learned from plugging it into a search engine while we were watching the episode. I also had to look up some things about chopsticks and melons while watching later episodes, but I never really minded. Though, some people might not be willing to do the groundwork to better understand the show’s gags.

Diomedea studio brings bright, colorful visuals to this magical boy anime, making the animation as fun as the story. Certainly this show is not for everyone, but its mixture of comedy, magic, and references to other shows are something that can truly be enjoyed.

Cute High Earth Defense Club LOVE! is a weekly anime series that began airing in Japan January 6, 2015, and is being simulcast via the anime-viewing website Crunchyroll. The anime has spawned a spin-off manga and light novel series.