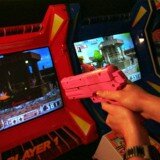 All That’s Retro: A Look Back at our Favorite Light Gun Console Games!

Last week at All that’s Retro we took a look at some of the more bizarre and awful old school gaming accessories to ever hit the market. Thankfully, not every accessory from way back when was pure garbage. In fact, some were so successful that they paved the way for new and improved versions that we still use today. Take the Wii remote, for example. It would feel awfully familiar to any gamer who ever held a NES zapper in their hands. While they certainly don’t share identical concepts or technologies, it is clear that much of the inspiration for the Wii remote was taken from the NES Zapper and the many other light guns like it, whether for home console or at the arcade. Light guns are still around even for current-gen consoles. You can usually find them bundled for the Cabela’s hunting series.

Light guns have always been a staple for arcade games, and I know I spent plenty of time perfecting my stance in front of those big arcade cabinets and working on my shooting accuracy (I had a particularly large obsession with Time Crisis). The game quickly began to change once the Nintendo Zapper hit the market and the popularity of light guns for home consoles really started taking off. Soon the light gun was readily available for most home consoles, from the Sega Genesis to the SNES to the Dreamcast. So this week we are going to take a look back at some of our favorite retro light gun games for consoles!

This game was originally an arcade favorite that was ported to several home consoles, including the NES and the Sega Master System, though the Sega version was arguably superior. They both had their own light gun accessory, the NES Zapper and the Light Phaser, which the game utilized in a big way. The game was one of the first shooters of its kind to feature an actual story line, (Your goal was to save hostages from a concentration camp and with every rescue you got more of the story revealed). You spent your missions fighting insanely hard tanks, and shooting chickens for ammo, and hoping to come across the rare machine gun that would allow you to shoot enemies at breakneck speeds.

For a lot of gamers, this was the definitive light gun game of our childhood. The NES came bundled with the Zapper for years and most of us had our first home console experience with Mario and his ducky pals. Like most light gun games at the time, it was a port from arcade that had a simple goal in mind: shoot as many ducks (or clay pigeons) as possible, lest you face the humiliation of being mocked and ridiculed by your hunting dog buddy for being an epic fail. That dog was the most obnoxious little bastard ever. It was a shame you couldn’t shoot him instead, though that didn’t stop us from trying! 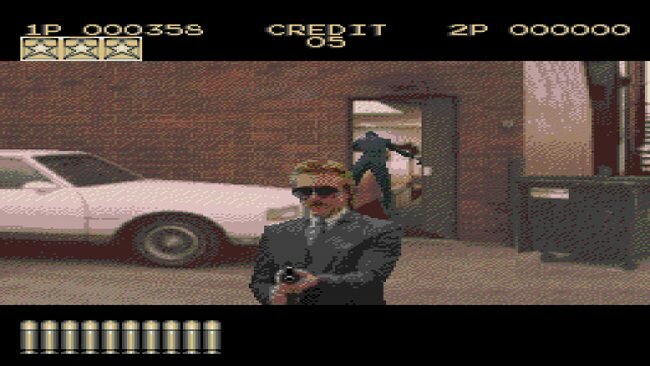 This was another fantastic arcade game that was ported to the Super Nintendo and the Sega Genesis, which used its very own Konami Justifier light gun. You play through the game as a seasoned cop in Chicago, cleaning up the mean streets full of criminals, with their uber menacing sunglasses and ski masks. You also had the option to add a second player, if you were willing to order a second gun from Konami. One of the distinguishing things about Lethal Enforcers was that the game used some extremely realistic scenarios and backgrounds, making it one of the first games to receive a MA-17 rating. The game was so realistic that it wasn’t even sold in toy stores. It was pretty popular, despite these restrictions and eventually spawned more games, cementing the Lethal Enforcer legacy.

I really like this Light gun game because unlike many of its fellow trigger happy counterparts, this game was more than just a typical shoot ‘em up. It attempted to think outside the box and get creative with the NES Zapper. Not only do you take down enemies by shooting them, you also use the Zapper to shoot your main character, Mr. Stevenson, to make him jump and avoid obstacles while he used his detective skills to hunt down clues to help him find his missing daughter. Kudos to you, Gumshoe, for making an effort to expand the uses of the Zapper gun and getting creative.

House of the Dead 2:

This creeptastic horror game is possibly the best light gun game the Sega Dreamcast had to offer. You had multiple gun options (there were tons of great after market guns compatible with the Dreamcast), and though you could play the game with a standard controller, using the gun added so much more to the experience. It took everything the first House of the Dead did and made it so much better. The game featured much better graphics, a decent story and plenty of scares, though the voice acting was abysmal. In true survival horror fashion, the game offered multiple endings. It brought the feel of old school arcade horror games into your home.

These are some of our favorite light gun games here at All That’s Retro! There are tons of other great games out there, arcade and console alike, so sound off in the comments and let us know what some of your favorites are, and as always, stay tuned for more retro gaming awesomeness next week!

Did you enjoy this article? We’d love to hear your thoughts in the comments below. For the latest on all that’s epic in gaming, movies, television and cosplay, follow us on Twitter or like us on Facebook!
37
SHARES
FacebookTwitter
GoogleWhatsappPinterestDiggLinkedinRedditStumbleuponTumblrMail

I Have No Objection to This Ace Attorney 6 Trailer

Uncharted 4: A Thief's End Multiplayer Beta Gets a Date