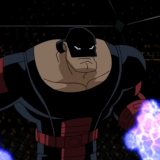 The time is approaching for us to once again don the black cape, bat ears, and high-powered technology as Batman: Arkham Origins are soon to hit store shelves. With plenty of trailers and screenshots being released and with previous games, Arkham Asylum and Arkham city, being so popular, many of us are surely excited for another adventure with the bat.

While there will be many villains seeking Batman’s demise, a new enemy has been revealed today at the New York Comic-Con, and many of you will be pleased to know that it is the Electrocutioner. The Electrocutioner is, as you can tell by his name, highly proficient in exacting painful attacks on his enemies by using lightning. Although the Electrocutioner generally uses his lethal powers against deserving criminals, this act of brutality is something that Batman had always frowned upon, and so, they became enemies.

It will be interesting to see what the Electrocutioner brings to the table, and we are looking forward to some epic boss battles with him and the rest of the Batman villains that we love to hate.

Did you enjoy this article? We’d love to hear your thoughts in the comments below. For the latest on all that’s epic in gaming, movies, television and cosplay, follow us on Twitter or like us on Facebook!
19
SHARES
FacebookTwitter
GoogleWhatsappPinterestDiggLinkedinRedditStumbleuponTumblrMail

BattleTech Headed Back to PC Via Kickstarter

I Have No Objection to This Ace Attorney 6 Trailer

Uncharted 4: A Thief's End Multiplayer Beta Gets a Date