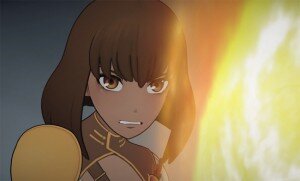 Am I sad that this episode did not cover what happened to Yang after last episode? Yes. But am I happy that we finally have some of Cinder’s back-story? Yes. She has long been one of the most mysterious characters in the series, with both her past and intentions being unknown. Sadly, though, this episode does not answer many questions. However it does show us how she recruited Emerald and Mercury with promises of better futures, and how she recruited the White Fang through fear. The episode also tells us that Cinder is indeed the person who holds half of the Fall Maiden’s power. (Much to the disappointment of the fans who were hoping Blake somehow held the power.)

Although we saw Cinder take the power through some weird beetle-like Grimm that she summoned, it is unclear how this works. Is this something that Cinder can do to people in general? Could she steal their semblance or abilities at the drop of a hat? Are there certain steps she must take before she can steal someone’s power? And is Ironwood trying to replicate this process with his experimental machine?

As usual, RWBY answers questions while giving you ten times more to speculate about.

Still, there were other important things clarified. First is that Emerald’s semblance allows her to manipulate one or more person’s mind to warp their reality. Though this was heavily implied in earlier episodes, it was finally confirmed. Also, Mercury comes from a line of assassins and has robot legs. Yes, you heard that right, robot legs. Which means when Yang hit his leg, she did not actually hurt him. Damaged the hardware, yes, but did not actually hurt Mercury. And even though Cinder told Mercury to lay low to keep up the ruse, you just know someone is going to see him walking around. Or at least learn about the nature of his legs.

Now with the huge upset that happened with Yang’s attack on Mercury, Cinder needs to keep building fear. If she waits too long then the people, and creatures of Grimm, will settle down. So when will she strike next? At the next doubles match, of course! There was already a huge audience watching the Vytal Festival, but with what happened the viewership will likely spike for the next match. What a perfect time to instill more fear into people’s hearts!

One last note on this episode is that Cinder seems to be working with someone that we have yet to see. At several points in the episode the screen cuts to black and we hear Cinder speaking to someone that does not seem to be Emerald or Mercury. She speaks about how she wants to have power, how she wants to be feared and take what she and the other person deserve. But who is this other person? What ties them together? And what is it that Cinder feels they deserves?

It will likely be Volume Four before any of those questions are answered, but I know we will enjoy the wait. The plot is quickly progressing, and the Vytal Festival is beginning to wrap up. Who knows what will happen before February’s finale?