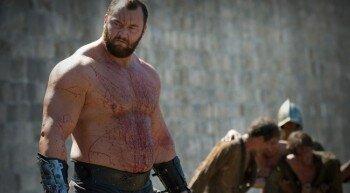 This week’s episode of “Game of Thrones” set us up for the remaining three episodes of the season. We now have a better idea of how the season will end. We know who will be Tyrion’s champion, and we know the battle at the Wall is inching closer.

The episode begins with Jaime visiting Tyrion in the dungeons. Jaime is upset with Tyrion for his actions during the trail. Tyrion explains he knows the deal Jaime made with their father was exactly what Tywin wanted, thus he is happy to throw off their father’s plans. He knows his father is aware Tyrion is innocent, so it makes his father’s betrayal that much worse and he wants to hurt his father as much as he can while he is still alive. Tyrion assumes Jaime will represent Tyrion in the trial by combat, but Jaime lets Tyrion know his training is not going so well and he will be uable to be Tyrion’s champion. Tyrion understands and hopes Bronn will fight for him again, then inquires who Cersei is naming as her champion; we learn Cersei is having Ser Gregor, aka the Mountain, represent her.

Game of Thrones Season 4 Episode 6 Review: “The Laws of Gods and Men”

Somewhere in the riverlands, the Hound and Arya come across a burned down home. They find a man stabbed and slowly dying outside the house. Arya tells the man her name and she explains this is no way for the man to die. After the three of them come to an understanding, the Hound puts the man out of his misery and stabs him in the heart. Suddenly, someone comes up from behind the Hound and bites him in the neck. The Hound is able to throw the man off of him and snaps the man’s neck at the same time. The Hound and Arya turn around and find a another man standing in the ruins. Arya recognizes the man as one of Yoren’s prisoners when she was being taken to the Wall; she asks him his name then suddenly stabs him.

Meanwhile, Jon Snow and his men arrive back to Castle Black from Craster’s Keep. Alliser Throne seems disappointed Jon survived the assault at Craster’s, and makes Jon lock up Ghost. Later that day, Jon warns the Night’s Watch that Mance Rayder’s army will arrive before the next full moon. Jon wants to seal up the gate; he says Mance’s giants will be able to come through the gate. Alliser seems intent on not taking any of Jon’s warnings seriously and argues that the Night’s Watch has never sealed the gate and does not think it is necessary. He orders Jon and Sam to take night duty until the next full moon.

Back at King’s Landing, Bronn visits Tyrion in the dungons with new clothes and news for Tyrion. He tells Tyrion he is to be married to a noble woman; Cersei arranged the marriage in exchange for Bronn’s loyalty. Tyrion is not surprised by Cersei’s actions and tries to buy Bronn back by saying he could potentially give him land up North. Bronn explains that even though he likes Tyrion, he values his own life more than Tyrion’s. He also knows he cannot beat the Mountain and does not want to die for Tyrion. Tyrion understands and the two men shake hands. Bronn asks what Tyrion plans to do, and Tyrion jokes that without a champion he will have to beat the Mountain himself.

Across the Narrow Sea in Meereen, Daenerys enters her chambers to find Daario waiting for her. She demands to know how Daario got into her private chambers, and he explains her windows are not well protected. As he gives her some wildflowers, he explains he only has two talents; killing and women. He tells Daenerys he will not do well patrolling the streets of Meereen, but if that is what he wants her to do, he will do it. In order to show her his other talent, Daenerys has him take off his clothes.

At Dragonstone, Selyse walks in on Melisandre bathing. She wants to talk to Melisandre before they depart. Selyse explains Stannis wants to bring their daughter, Shireen, with them, but Selyse does not think it is best because Shireen is a heretic. Melisandre says that is impossible; The Lord of Light needs Shireen to come with them.

Back in Meereen, Ser Jorah walks to Daenerys’ chambers and finds Daario leaving them. When he finds Daenerys he questions why she trusts Daario, and she explains she does not trust anyone. She tells Ser Jorah she is sending Daario and the Second Sons to Yunkai to kill the slave masters that are disobeying her orders. Ser Jorah argues that it is not wise to simply kill her enemies. She counters by saying she wants to end slavery. Jorah explains he use to sell slaves and he has since changed his ways, so it is possible for the slave masters to do the same. Daenerys considers his words and changers her mind. She tells Ser Jorah to find Daario and have him bring Hizdahr zo Loraq to Yunkai with him and warn the masters what is happening in Meereen.

Back in the riverlands, the Hound is trying to clean his wound and stop the bite from becoming infected. Arya wants to cauterize the wound but the Hound yells at her about the fire. The Hound wishes he never laid eyes on Arya because he keeps getting hurt. The Hound tells Arya about how he got the burns on his body and that the worst part about it was that his brother was the one who burned him and their father did nothing about it. Arya is not insulted by the Hound and seems to sympathize with him. She asks if she can at least wash it out and sew it up; he agrees.

Somewhere nearby, Brienne and Pod stop at an inn and treat themselves to a warm bed and a proper meal. Low and behold, Hot Pie is their server and sits down with them to explain how he cooks his pie. Brienne grows impatient with Hot Pie and asks if he has seen Sansa Stark. Hot Pie hesitates, then says he has not seen any Starks. The next morning, Pod tells Brienne they should not tell people they are searching for Sansa because of the Lannisters. Hot Pie approaches them and tells them he has not seen Sansa Stark, but he knows Arya. He tells Brienne and Pod about his time with Arya and explains the Hound has her. Pod thinks the Hound will take Arya to the Eryie, and Brienne thinks Sansa could be there too.

Back at King’s Landing, Prince Oberyn visits Tyrion. He tells Tyrion Cersei visited him and was trying to persuade him against Tyrion. Oberyn explains he met Tyrion when Tyrion was first born. He was a young child and was being taken to Casterly Rock by his father; he did not enjoy the trip outside of Dorne. He tells Tyrion he and his sister heard stories throughout the kingdom about the monster that was born in the Lannister household. He explains people were saying Tyrion had claws for hands and his head was twice the size of his body. When Oberyn arrived to Casterly Rock, Cersei promised to show them the monster. When Cersei finally brought them to Tyrion, Oberyn said Tyrion was not a monster. Cersei told Oberyn Tyrion killed their mother and he will not live long. Ever since this incident, Oberyn knows Cersei has wanted Tyrion dead, and does not think it is justified. He explains he wants justice for his sister and her children, and says all of those who have wronged him in the past are currently in King’s Landing. He explains he will begin his quest for justice by taking on the Mountain as Tyrion’s champion. Tyrion seems shocked yet honored to have Oberyn fight for his life.

The episode ends in the Eryie with Sansa walking outside of the castle to find snow. A large smile comes across her face as she runs to the snow and begins to build a model of Winterfell out of the snow. Robin joins her and asks about Winterfell, and why her model does not have a moon door. Sansa explains Winterfell did not have a moon door or anything like that. She explains she will likely never see her home again, and Robin explains when they are married, he will let Sansa punish anyone she pleases and will have their enemies fly through the moon door. Robin wants to help Sansa, and wants to add a moon door to Winterfell. He knocks over part of the castle, and when Sansa gets upset with him he throws a temper tantrum. She hits Robin and he runs away. Petyr arrives and tells her not to worry hitting Robin; it was something her Aunt Lysa should have done a long time ago. Sansa changes the subject and wants to know why Petyr really killed Joffrey. Petyr explains he loved Catelyn more than Sansa will ever know, and he killed Joffrey for hurting Catelyn. He kisses Sansa, and Lysa watches them from inside the castle.

Later, Sansa is summoned by her aunt and meets Lysa in the throne room looking down through the moon door. Lysa wants to know if Sansa knows what happens to bodies when they fall, then tells Sansa she saw Petyr and Sansa kiss. Sansa yells as Lysa grabs her and holds Sansa’s head over the moon door. Sansa tells Lysa she pulled away from Petyr and that Petyr loves Lysa. Petyr comes in and Lysa demands to know why he brought Sansa to the Eryie, and says no one will love him like her. Petyr explains he will send Sansa away if Lysa lets her go, and Lysa agrees. Sansa cries on the ground and Petyr approaches Lysa. He tells Lysa he has only loved one woman his entire life; her sister. He then throws Lysa out the moon door.

And as soon as she was introduced back into our story, she is gone. Lysa clearly was a bit unstable but her fears were justified; Petyr has an odd and creepy fascination with Sansa. It remains to be seen if Sansa has feelings for Petyr, but after all he has done for her it, I bet she will have some feelings for him.

As for our trial by combat, it looks like it will be quite the fight. Prince Oberyn is known to be one of the fiercest fighters in Westeros, even though that has not been demostrated too much in the show. Book readers know this and that is why he has the nickname, the Red Viper. Nevertheless, I think the scene between him and Tyrion was one of the best scenes this season and really showed that there are just people in this world. It looks like the trial by combat will occur in the next episode, so we won’t have to wait much longer for one of the best scenes in the book.